So I'd better write it down here before I forget. 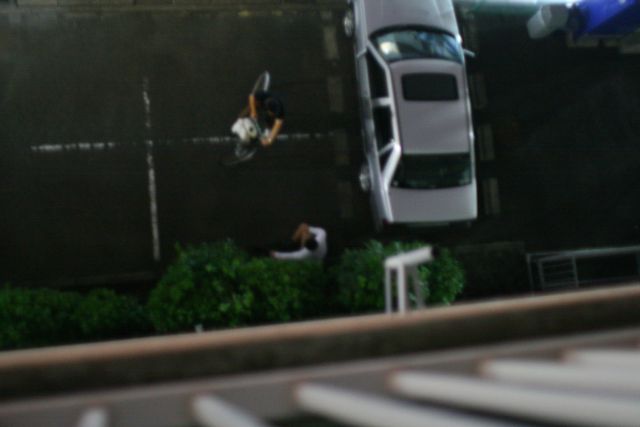 Yesterday night me and Brian were talking when we noticed a guy yelling loudly outside. That by itself is not unusual on Friday night, since a lot of people walk home drunk. What was slightly more unusual is that this person took off his pants and starting waving them around, after which he was unable to stand and decided to sit down and take a nap under my room.

On Brian's initiative we decided to go down and check if the guy was okay, and to see if we could strike up a conversation. Quite a strange idea if you ask me, but it was quite interesting. At first the guy was very defensive, but when he realized we just wanted to talk he tried his best to talk to us in English. Which took forever, since his English was very crappy. We tried to talk back to him in Japanese, but he insisted on English.

In the end we did talk about some interesting topics. We talked mostly about the Akihabara incident (a couple of weeks ago a guy went around in a truck ramming people and stabbing them at random), and how it affected Japan. The guy was convinced that most people in the world are bad people, and that the world is going downhill. When we told him that it's not just Japan where this kind of senseless violence happens, he told us that, of course, in foreign countries this happens, but Japan is supposed to be safe. Japanese people cannot accept this kind of violence, he said.

In the end we talked for a couple of hours, and it was getting cold when the guy finally went home, still without his pants. I hope that we managed to convince him that not everybody is evil.