Flashback to Himeji, the capsule hotel, 7AM. I woke up from the grunting old salarymen all around me. I like the idea of a capsule hotel, but I definitely don't like the guests. I'll consider it an emergency option from now on, but I won't voluntarily go there again. I got on my bicycle and started cycling southwest towards route 250, another beautiful road that I wholeheartedly recommend to any cyclist in Japan. Slightly hilly but beautiful nature and great fishing villages along the way, plus a very nice view on some of the tiny funny-shaped islands in the Seto-naikai. 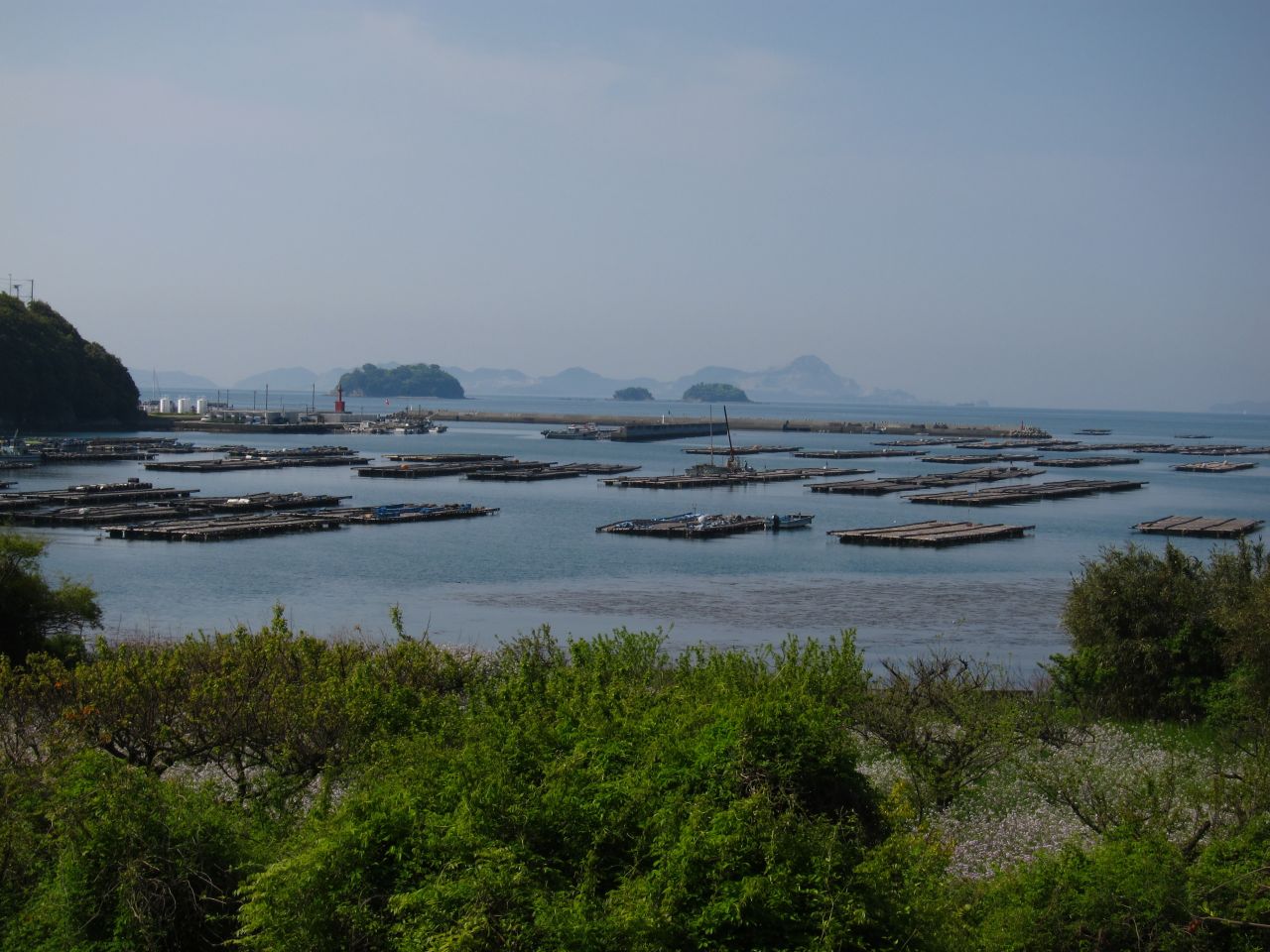 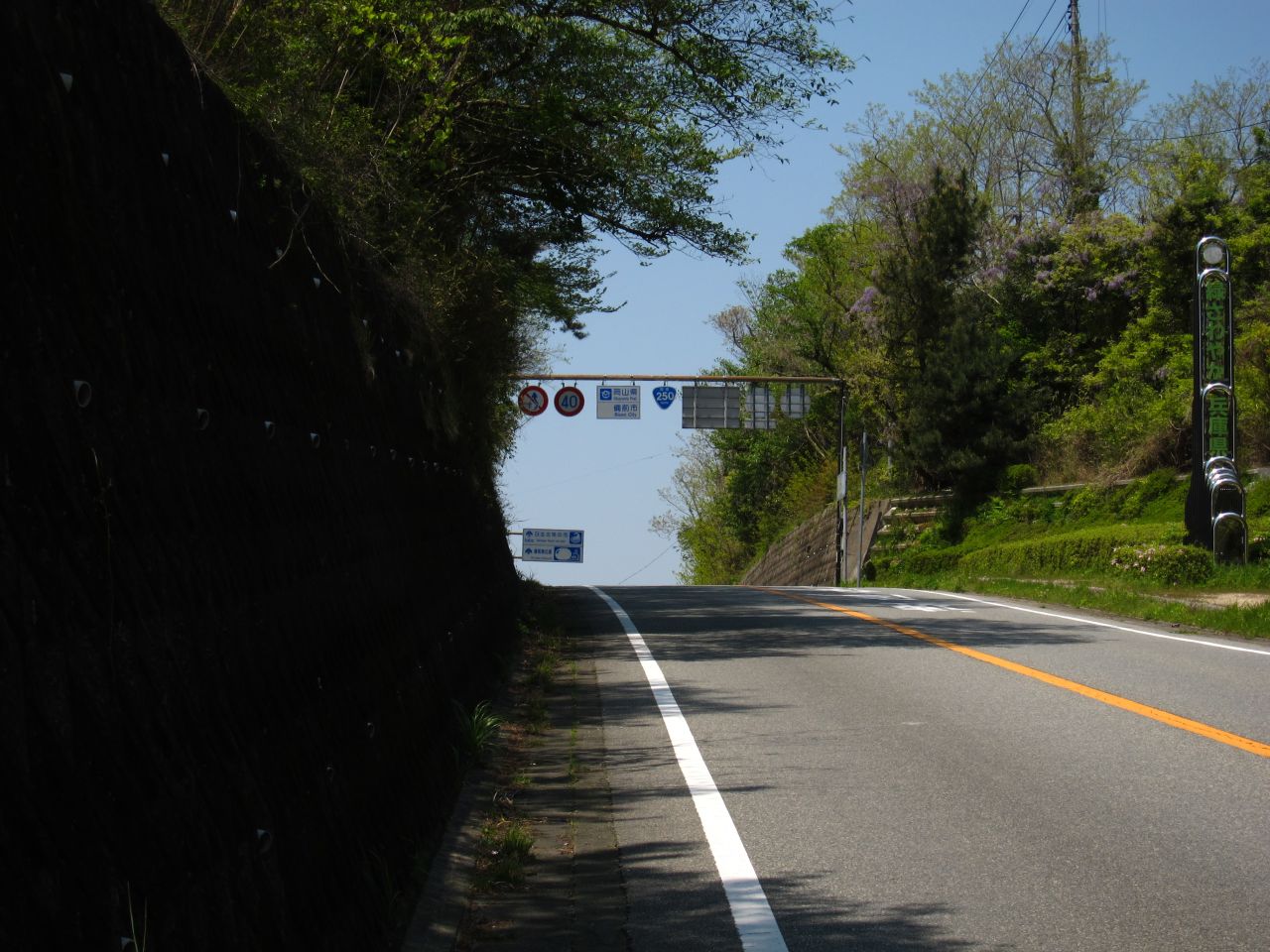 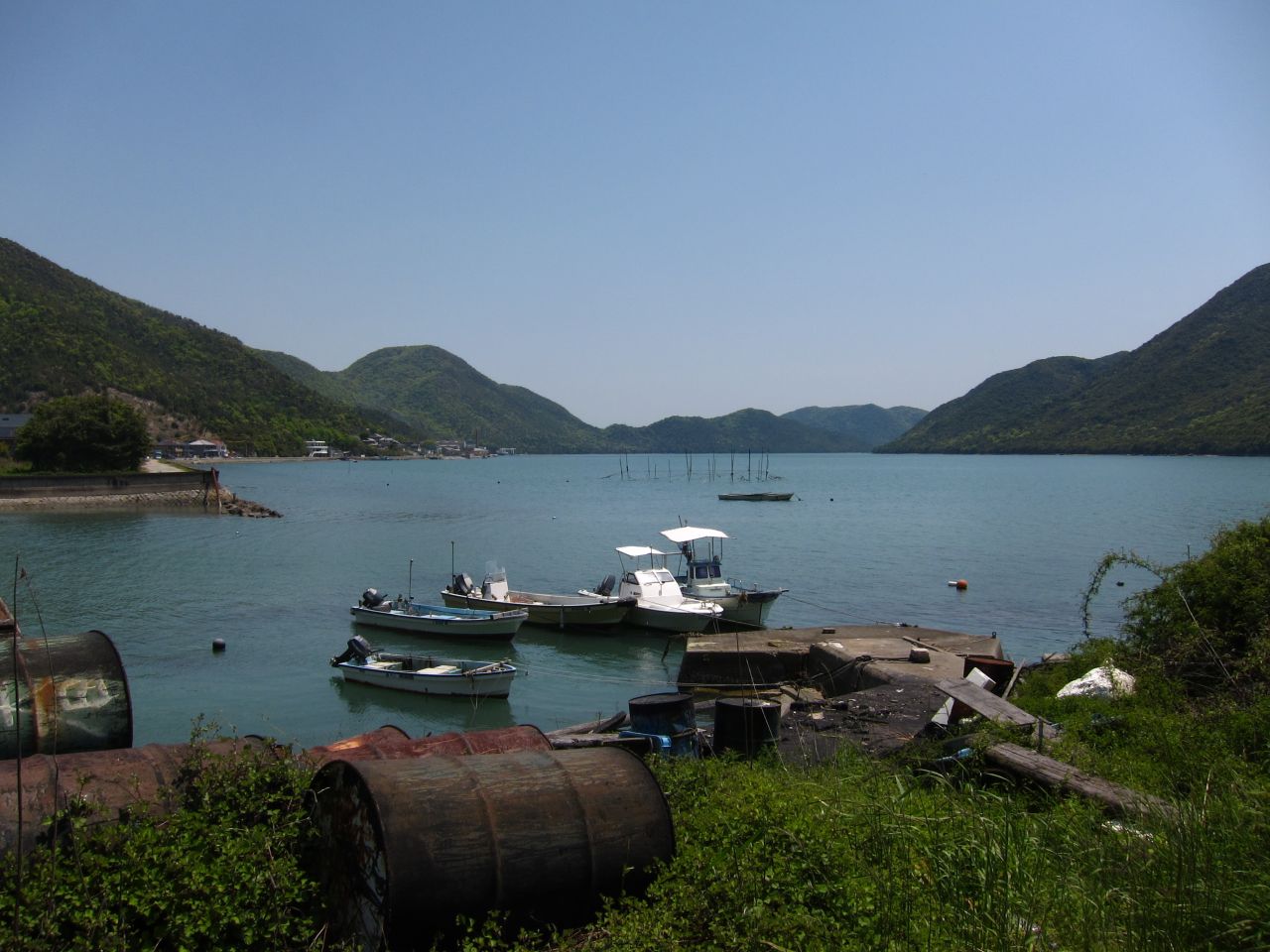 I really enjoyed the route a lot and wanted to cycle on and on, but I forced myself to take a break when I reached a great field of grass next to the river. As I took a break there a guy approached me and started talking to me. I talked to him for a while. Ken-san has just retired and has been to Holland 40 years ago, and happened to be living 5 minutes from where I stopped. Just when I was about to leave again he told me to wait a while, and then walked to his house and came back with a bag full of food: strawberries, bread, cookies and a bottle of juice. Brilliant! Thank you Ken-san! 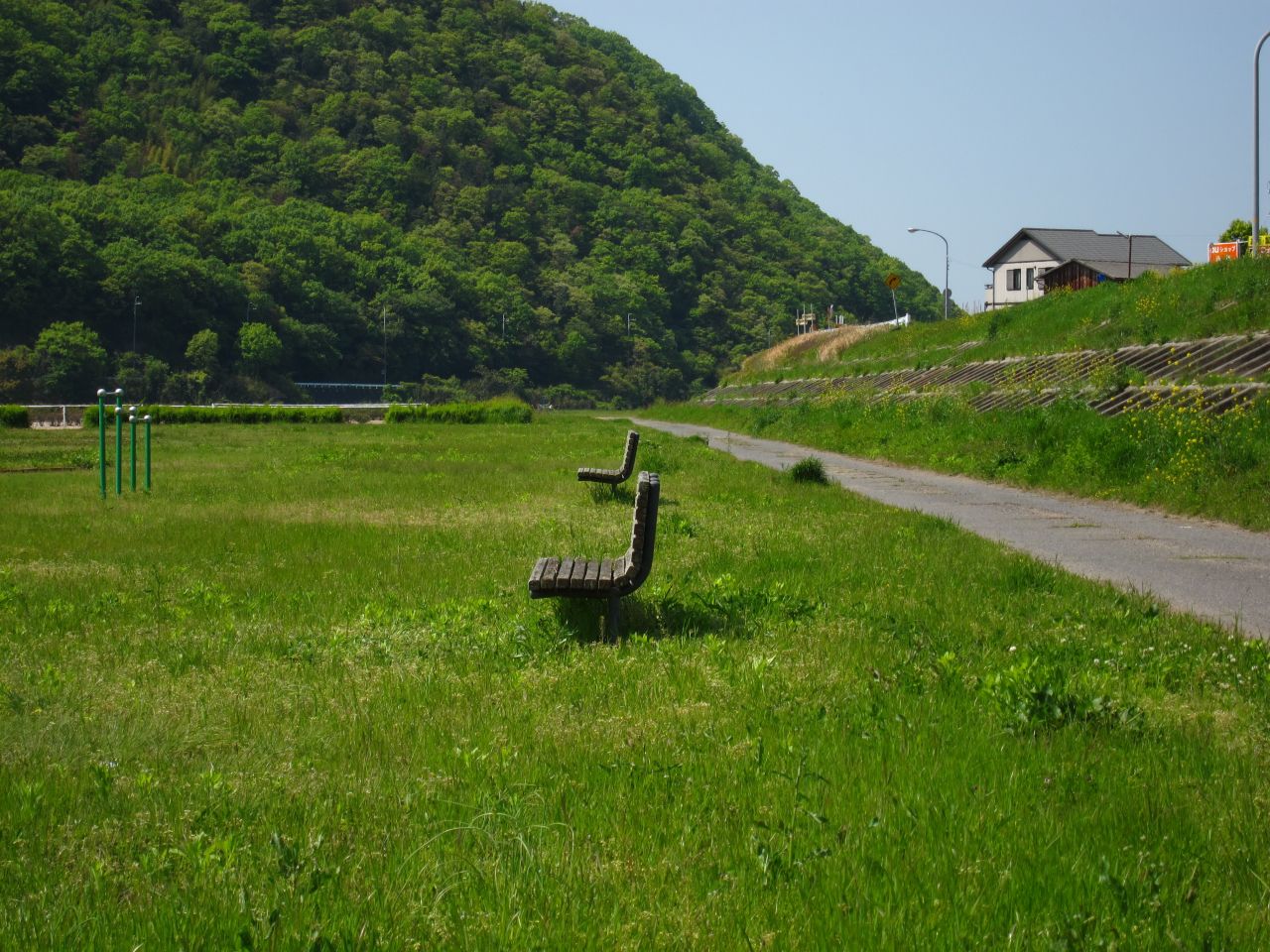 If you go here you can meet Ken-san too

I very much enjoyed route 250 for the entire morning, but in the afternoon I got closer to Okayama and it changed into a typical boring city road. I took a detour when I saw a sign that said 'cycling road', but the cycling road soon ended and I lost track of which road I was on. I could have checked the map, but instead I took the most interesting looking road and let my compass point westward. It didn't work that well because 20 minutes later I was back at route 250..

At this point I was way ahead of schedule. I expected to cycle about 80km's today but I reached Okayama which was about 100km's from where I started. This was unfortunate because there is no way to find a pleasant camping spot in the middle of a city. I considered a 24-hour public bath but it was closed, so I quickly cycled on in the hopes of reaching the other side of the city before sunset, where hopefully a new section of countryside would start.

Well, that didn't happen. Instead I wandered into rich-people-city. I don't even know the name of the city, but there were huge expensive hotels and expensive Porsche's and Mercedes' everywhere. Not exactly a place to camp either. I had to cycle further.  And further I cycled. After 80 kilometers it's not really fun any more, cycling just happens automatically. At 100 km's I am ready to accept pretty much anything as a place to stay for the night. Today I cycled 118 kilometers and ended up in a town called Kurashiki. At this point I was fed up with the idea of camping and as soon as a business hotel appeared on the road I went in. Fully booked, damn. The kind lady gave me a map of all the hotels in the city, and I cycled to the next business hotel. Also fully booked. Double damn. Then I noticed the item at the bottom of the list: Kurashiki Youth Hostel. Brilliant! I somehow managed to end my day of cycling near the only youth hostel within 30km's! :D

The brilliance does not end there: as it turns out there is a festival in the city tonight, and that's why all the places are fully booked. After typing this I will go out and enjoy a nice Japanese festival ^_^. It's these days that are the best, really. Great weather all day long, the morning started out awesome, and then as time passed my mood got worse and worse, but somehow everything turned out great in the end. It always does. I wonder why.

The youth hostel was located in an inconvenient place as usual, and I had to climb a nasty hill to get there. The view of the city from the top of the hill was beautiful though, and I enjoyed talking to a nice young lady while watching the sunset. A great end to a great day. 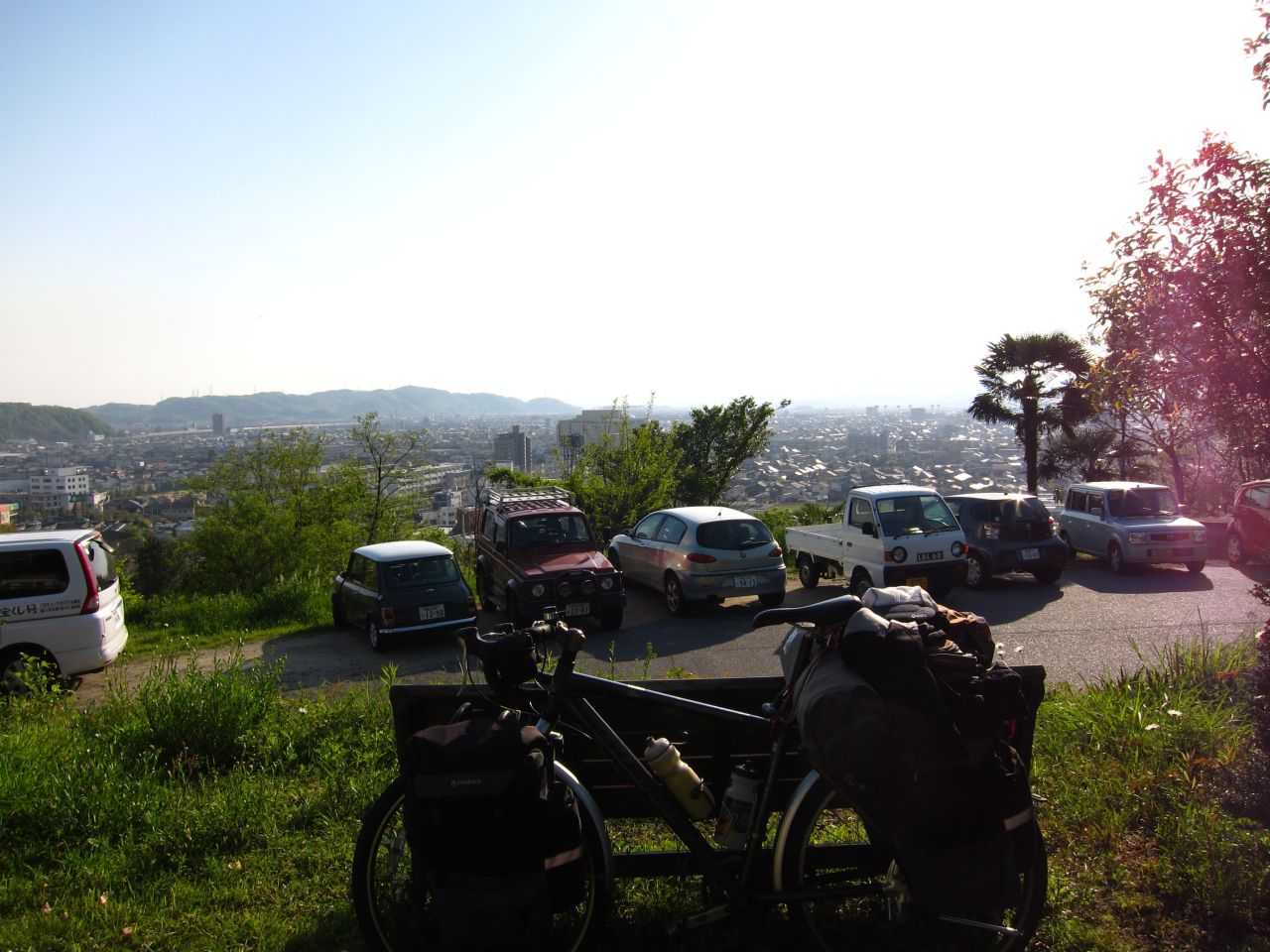 The view from hostel hill