A hot day in Hiroshima

I made it to Hiroshima! But not without problems...

Let's start at the beginning. I woke up at around 6AM, packed up my tent and went on my way. I had a very good rest last night, and it was the first time that I could sleep comfortably in my tent. Last night I really felt at peace at the shrine, and I sat outside for a long time just staring at the scenery while finishing some leftover snacks. I had a good time thinking about a lot of things, and I felt fresh and ready this morning. For the first 2 hours I alternated between watching the scenery and watching the tiny caterpillar which was crawling up and down on my left-front bag. I imagined what it would be like to be a caterpillar on a bicycle, and I cycled on and on and on. 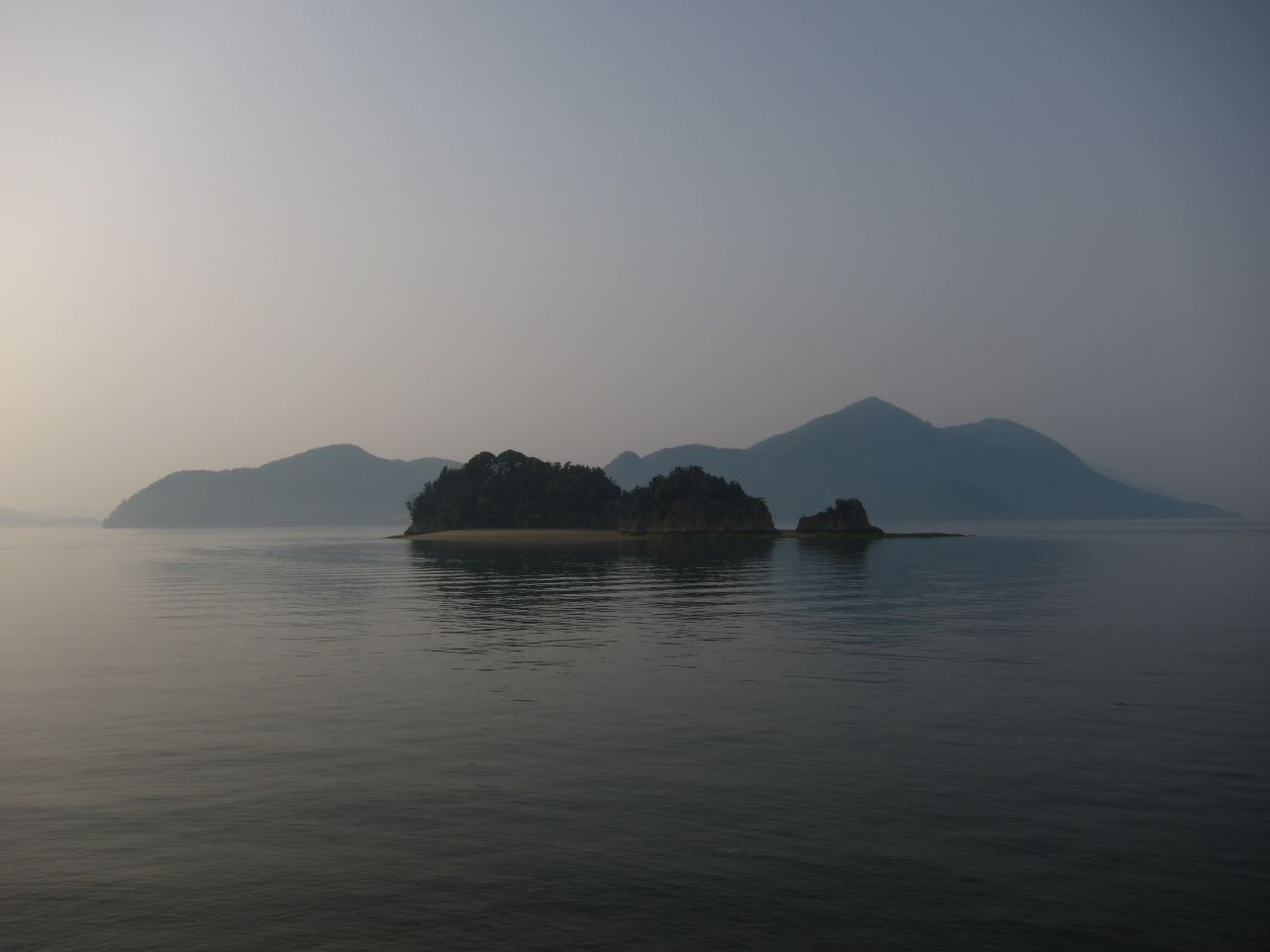 I don't know about you guys, but I'm getting desensitized from the continuous beautiful landscapes, so today is just this one photo. I'll share some other stuff instead. 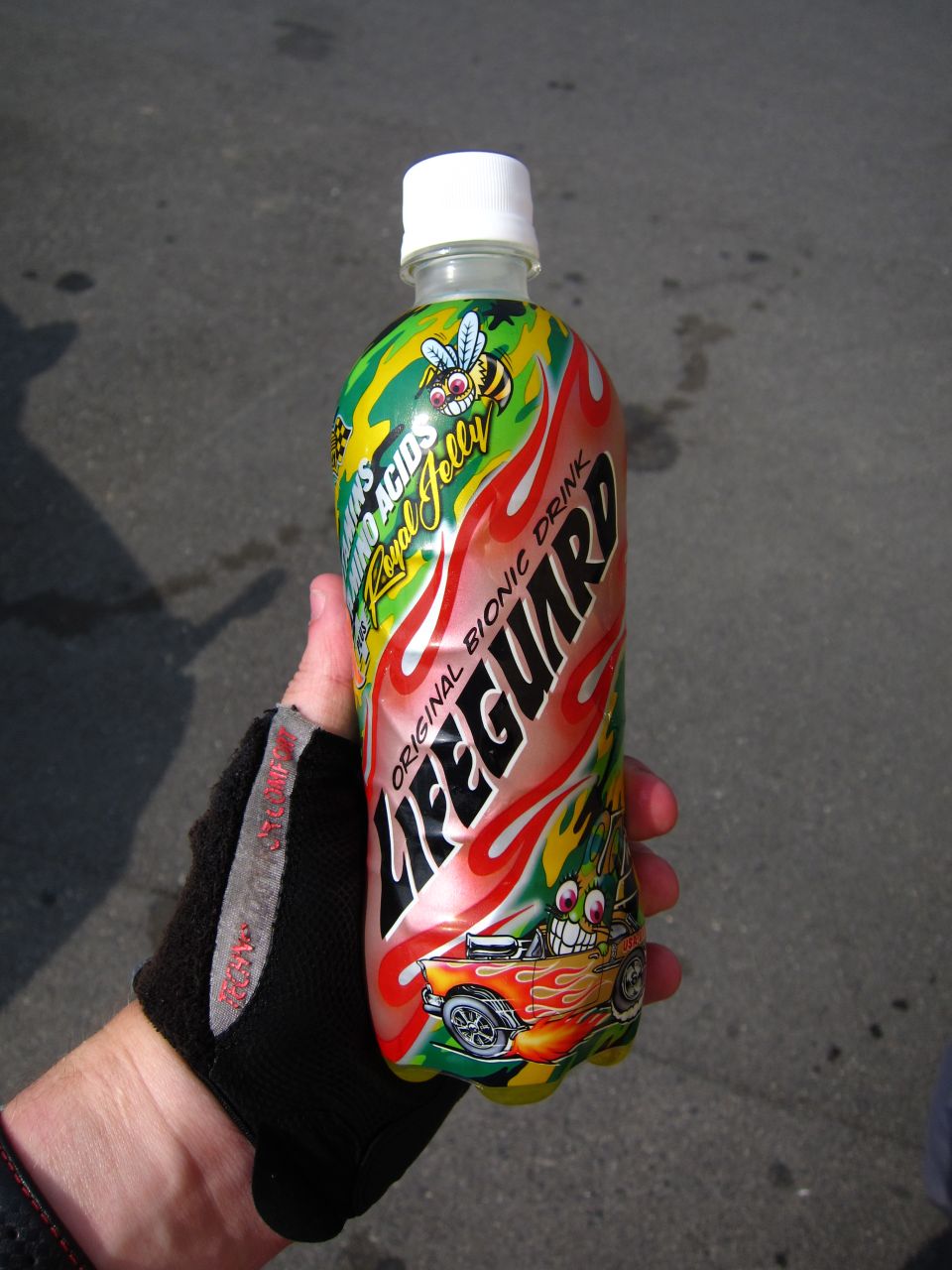 The other side said "USA daaaaaaaaaaaaaaaaa!". Weird drinks from random vending machines are part of the fun of cycling in Japan. 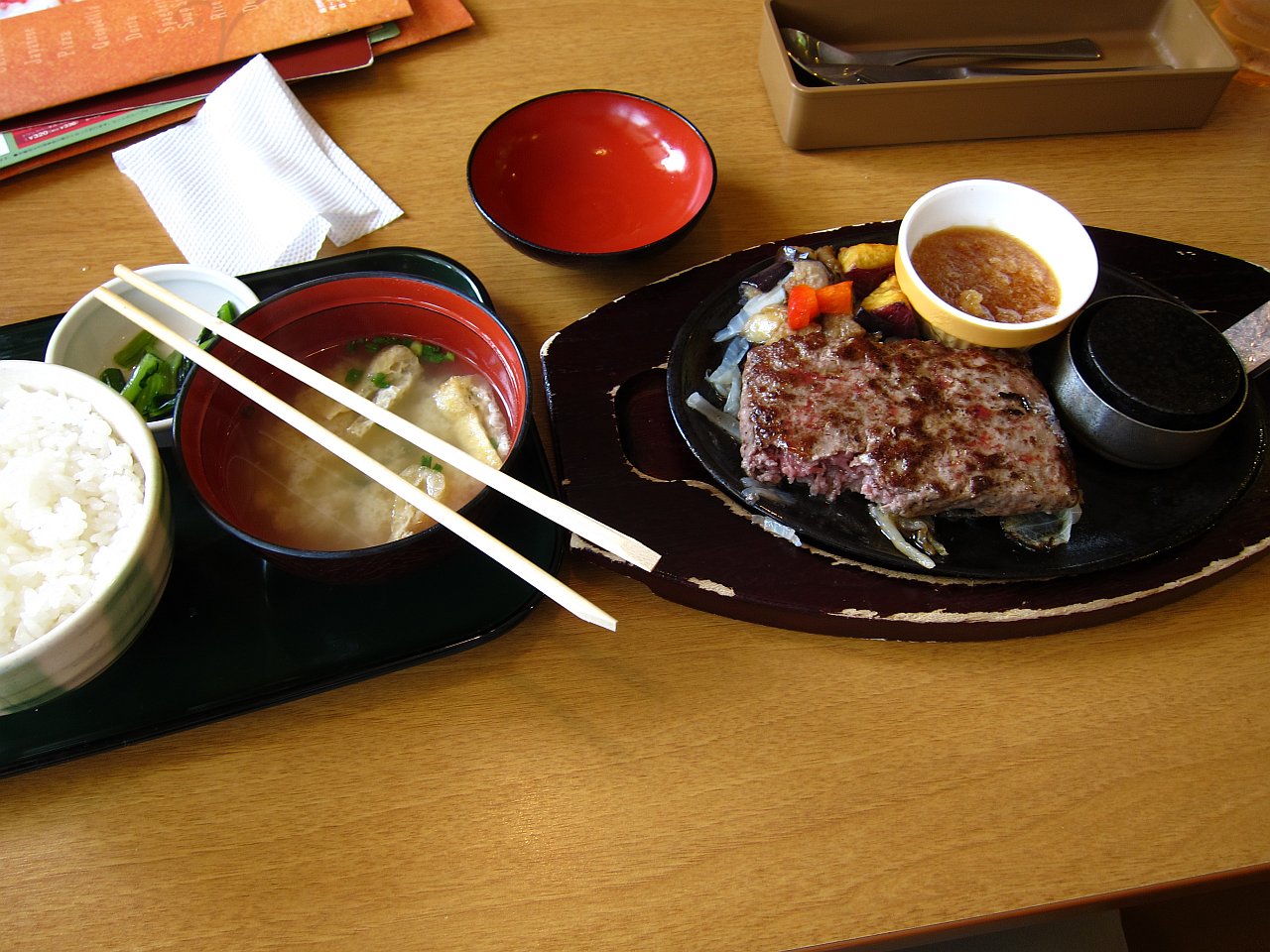 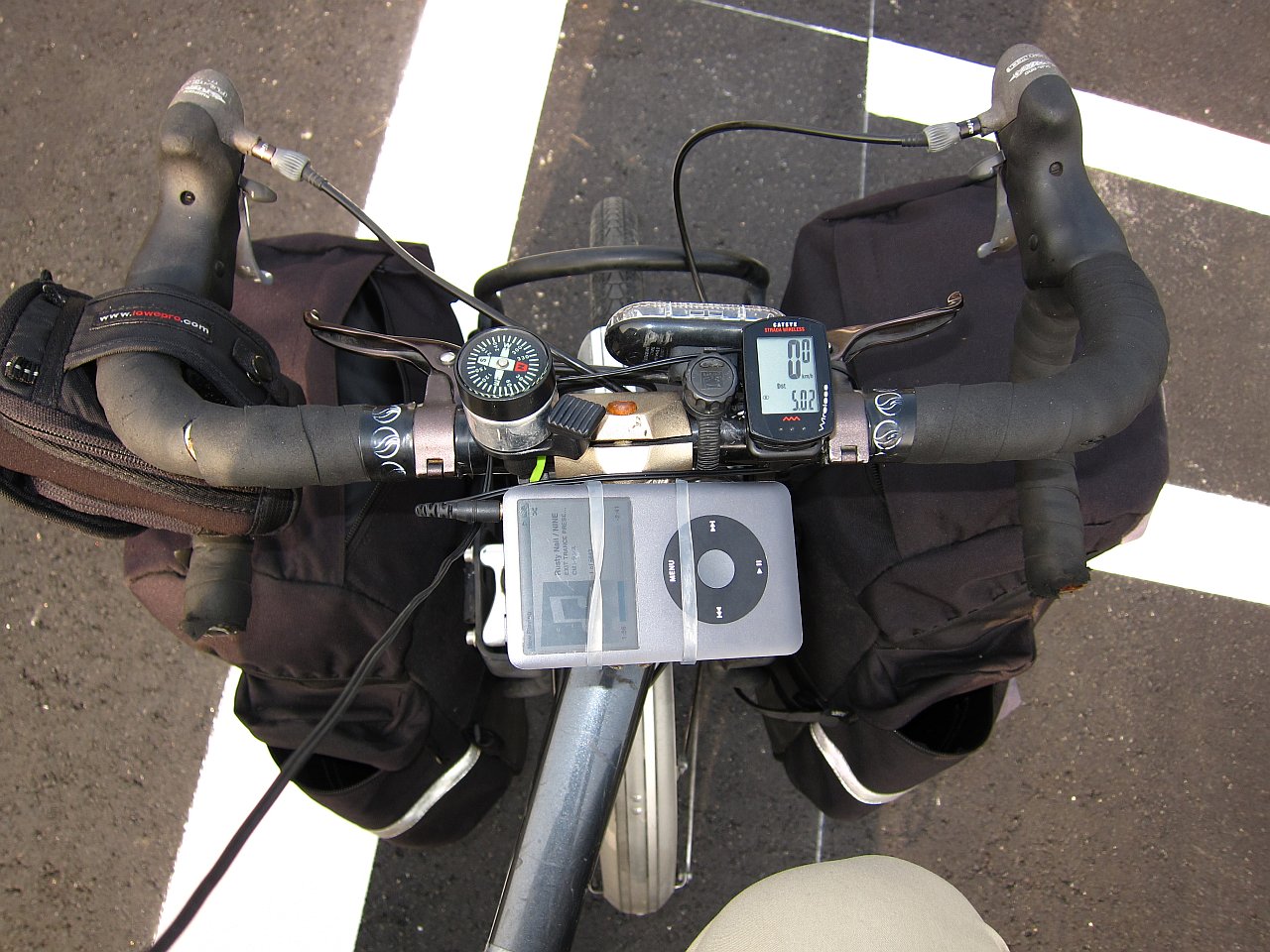 When I took this photo the caterpillar left already. Note how I managed to fiddle my iPod on there. I got tired of it after half an hour and dismounted it again. There's a whole bunch of scratches on the back of the iPod but iDon'tCare.

I'd gotten an early start today because of camping, and I managed to do about 60 km's before lunch. After exiting the restaurant I turned back onto the road and got ready to take my time and enjoy the remaining 25 km's to Hiroshima. The weather was great, the scenery was nice, and I was ready to slow-cycle the entire afternoon away while looking around random places on the way.

It was after entering a long tunnel that I noticed the first sign of trouble. The tunnel was very dark, and I took the pedestrian path instead of the main road. There were a lot of bumps on the way that I could not really anticipate for because of the darkness. In the middle of the tunnel I hit a big bump, and I felt the inside of my rear wheel hit the tire. That's a very bad sign, meaning there's not enough air in the tires. I don't normally hit a lot of bumps along the way, so I hoped sincerely that it was just because of the stupid tunnel and not because of lack of air, but my fears were justified. When I exited the tunnel I noticed my tire was nearly flat.

My first puncture! What to do? Well, I happened to exit the tunnel into a small city, so my first instinct was to find a bicycle shop and get it fixed professionally. I've honestly never fixed a flat tire myself, and although I have the tools, I don't have the confidence and would probably waste a lot of time fixing something that a professional can fix in half the time. I asked at the place where I flatted out, which happened to be a taxi company, if there was any bicycle shop nearby. Alas yes, but they were closed because of the golden week, which is a national holiday week in Japan. They told me I would not find any bicycle shop in business for at least the next two days.

Thinking how much time it would cost me to fix it myself, I decided to see how long it would take to deflate the tire while cycling on it. I got out my tiny foot pump and pumped as hard as I could, and then cycled on like a speeding (well, sweating) bullet towards Hiroshima, which was at this point only 20km away. If I could olnly reach the youth hostel then I could take my time getting my bicycle fixed later.

My stamina outlasted my tire, which was flat again in less than half an hour, still 15km's away from the city. I had no choice but to stop my bicycle at the side of the road and fix it myself. I prepared for the worst and got out my bag of tricks, which contained this little gimmick: 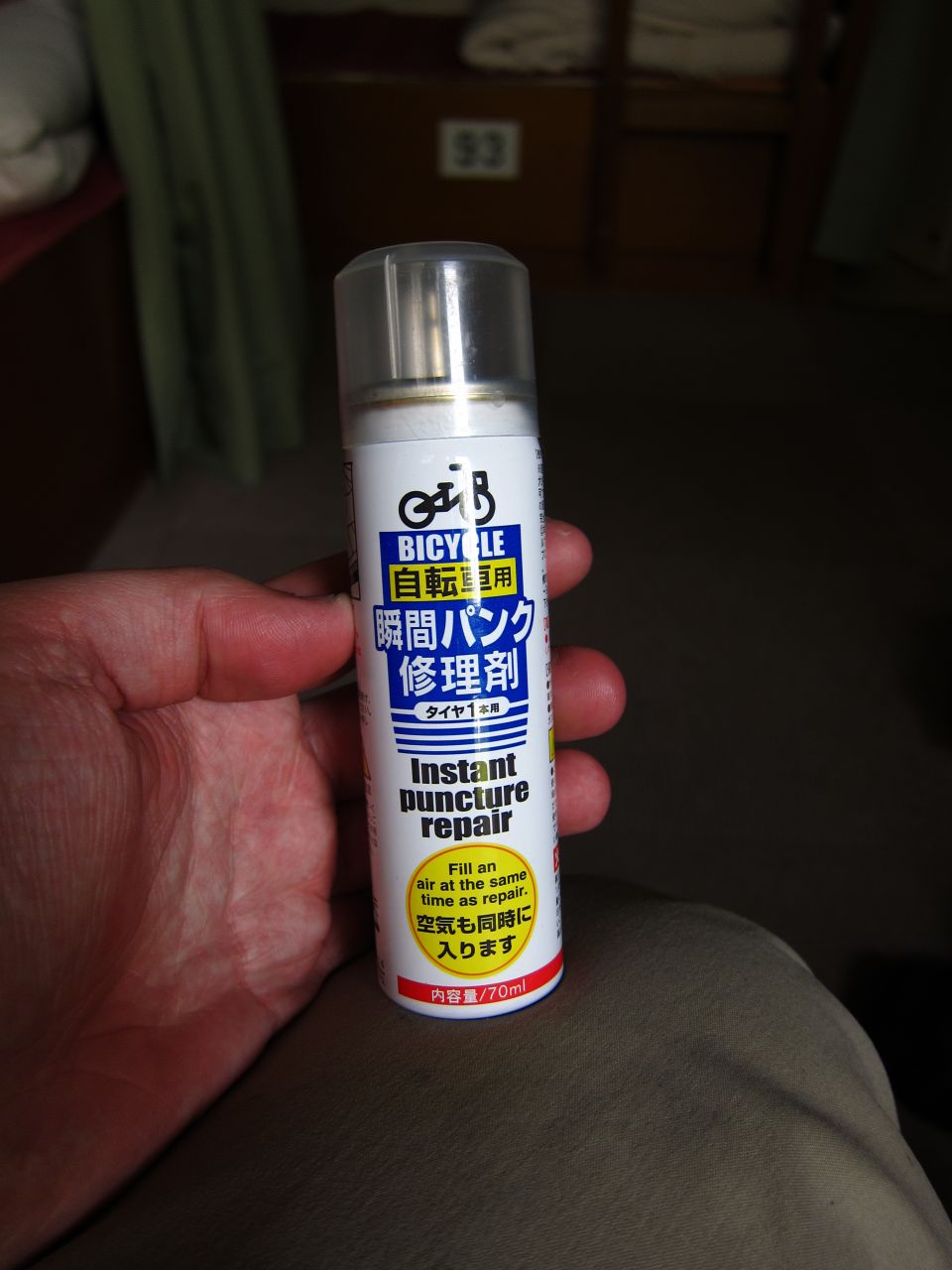 Yes, this magic spray is supposed to fix punctures. Well, it's surely a lot better than getting out the inner tire and replacing it with the spare, so I tried this first. The usage seemed fairly simple: 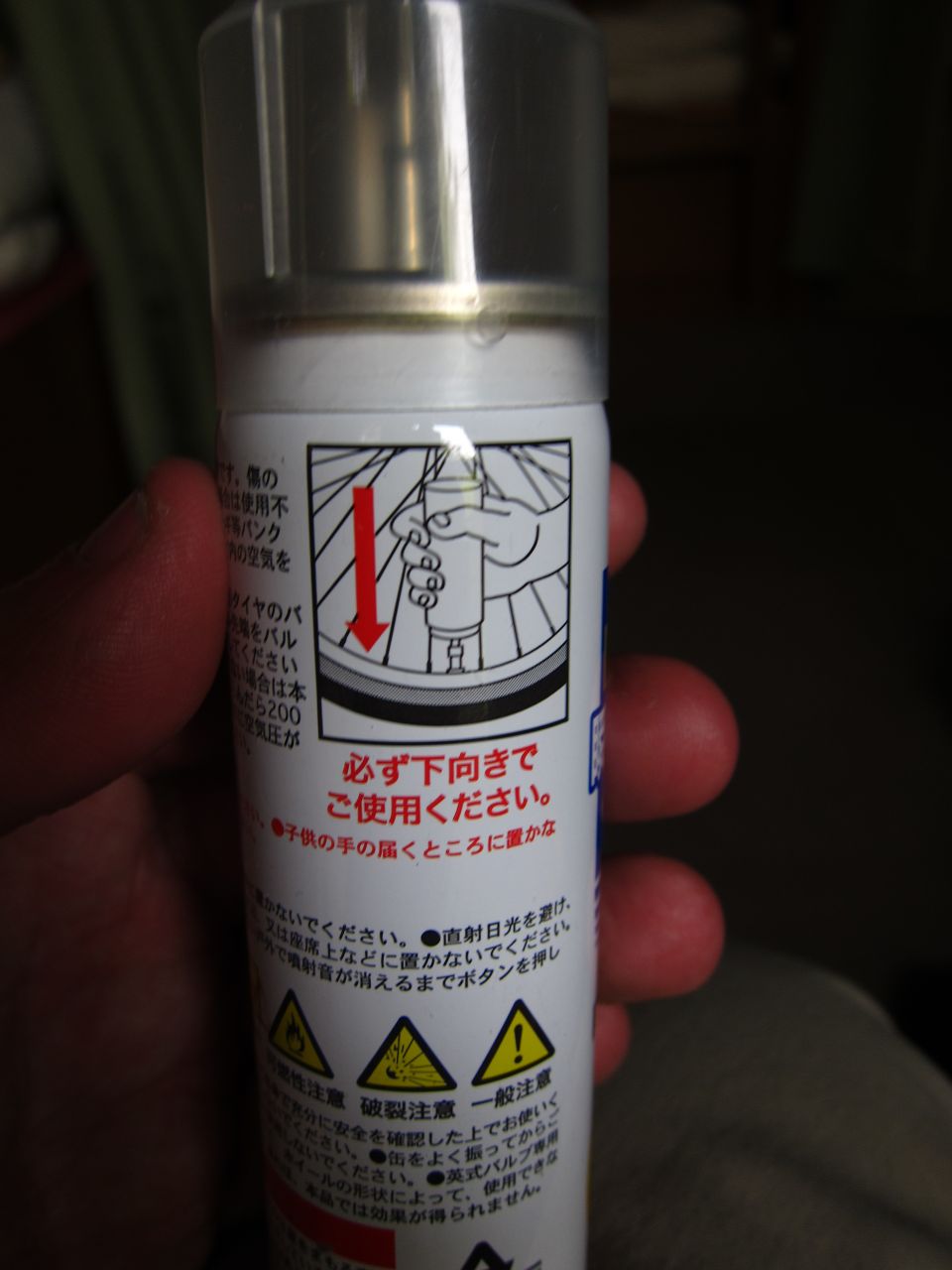 Right. Put it on the nozzle and push. Even I can do that. I should've spent a little bit more time reading the instructions, because I pushed way too long and the stuff squirted out of the nozzle like shaving cream. Oops. Oh well, better too much than too few, I guess. I proceeded to pump the tire as hard as I could with the crappy foot pump and proceeded on my way.

It works! The magic spray thing works! I still cycled like a speedrabbit all the way to Hiroshima, but the tire didn't go flat any more. After I reached Hiroshima I started searching for my hostel, and I happened to run into a bicycle shop that was not closed on the way. Lucky! I asked the pro to take a look at my tire, and he found no leak. I told him how I fixed it, and he told me it should be ok. Worst case scenario is that the tire starts leaking again after a week or so, in which case I can use the spray again or just replace the tire. I'll ride with it for now as I've decided to take a break here for a couple of days. If the tire is flat again before I leave then I'll replace it. Oh, and my chain is nice and oily again! It's been squeeking like a thousand birds for the past 300km's but now it's ninja-style quiet again. Like a stalker. 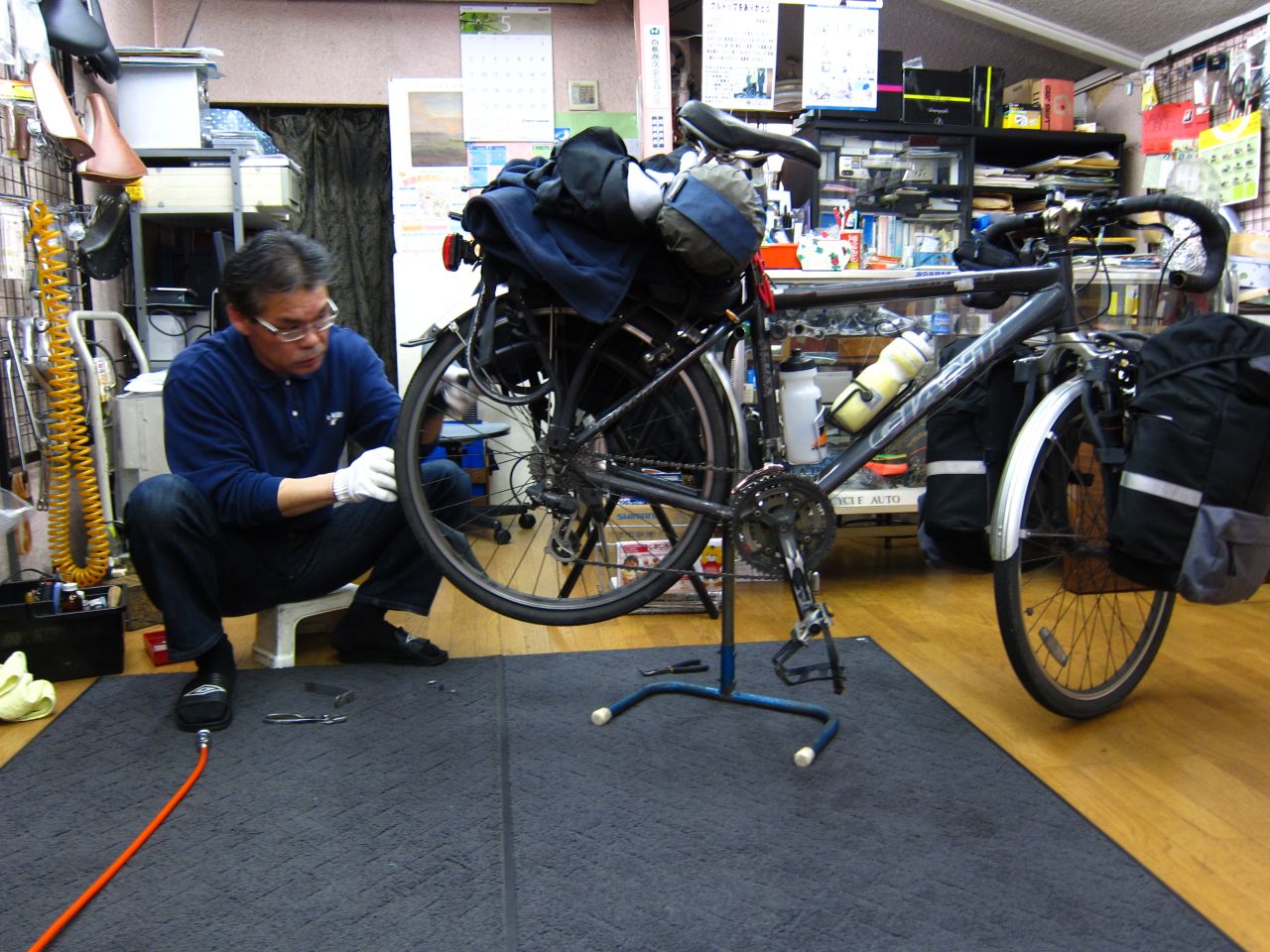 The pro does his thing

Soon after the healing I arrived at the youth hostel, which was yet again at the top of a hill with an impossibly steep road leading towards it. I think they do it on purpose. It certainly killed me. Then I had to carry four side bags, two backpacks and a sleeping mat down a long corridor, up two long stairs and down another corridor before reaching my room. Guh. Oh well, the hostel is three times as cheap as the average business hotel so it's absolutely worth it.

I made it! I'm in Hiroshima. I set out again on my now luggage-less bicycle at around sunset to explore the city. Turns out the youth hostel is very very far from the center, and it took me about 20 minutes to get to the famous peace lane (is that the name in English? I don't know). There's a festival called 'flower festival' in the city today, and tomorrow, and the day after tomorrow. They could have called it 'hana matsuri' in Japanese, but for some reason it's called flower festival in English. Meh.

First impressions of Hiroshima and the festival: people don't get out of the way for me, policemen are annoying, and the stupid festival completely destroys the peace because there's a lot of young loud drunken annoying Japanese guys walking around acting like idiots. I wanted to see the famous genbaku dome and the peace park, but that's exactly the area where the festival was being held. At first I thought it was only me, because all the Japanese seemed to enjoy themselves, but my two youth hostel bunkmates share my opinion: they came to see the genbaku dome, and they don't care about the stupid festival.

The festival wasn't all bad though: right in the middle of the festival street there was a concert going on, and I immediately recognized the song being played as one of the ending themes of an anime called Full Metal Alchemist. Whenever I hear a song in public that I know is anime theme song, I smile, and I feel happy to be in Japan, where the anime culture is so nicely mixed with regular society.

The festival streets were blocked off for the people to walk, and being a good citizen I stepped off my bicycle and walked all the way to the next crossing and the end of the festival. I was about 20 meters away from the exit when I got on my bicycle and started to cycle again, very slowly, towards the exit. There were no people in my way at all at this point. Then suddenly a policeman with a f*cking megaphone runs up to me and starts shouting "GET OFF YOUR BICYCLE!". WTF?! I politely explained the guy in Japanese that I was leaving the area and that there was nobody I could possibly hit. The response: "GET OFF YOUR BICYCLE!". I politely thanked the policeman for the advice, got off my bicycle, walked 15 meters, then got on my bicycle again and cycled onwards. I also called the guy an asshole after he couldn't hear me anymore. hahaha

I finally reached the genbaku dome and hung around there to take some photos. There were a lot of people gathered around there and a Japanese pop group was singing. Something about 'Yamato world peace' or something that really didn't matter to anyone around as they were only there to enjoy themselves at the festival. Lacking the interest to stay there and listen to more of that crap I went somewhere else and found a nice ramen place to eat, then went back to the youth hostel.

Super-saiyan note: remember when Goku does the weight training and then takes the weights off? I felt like that after leaving my luggage at the youth hostel :D It felt awesome to ride without luggage! I can actually start from a standing stop in a high gear and have some form of acceleration (and no squeaking thanks to the oil)! It felt great. Well, it felt great until I had to climb the damn hill that leads up the youth hostel again. Feeling overconfident without my luggage I started too fast and was completely out of breath at the halfway point. Whoops.

I've yet to find the magic of Hiroshima. Perhaps my timing is a bit bad with the flower festival and all that, but I'm hoping to go around a bit tomorrow and discover the nice places, not the populated places. Well, after I do my laundry, that is. I've got a whole new bag of smelly clothes ready to get washed again.. 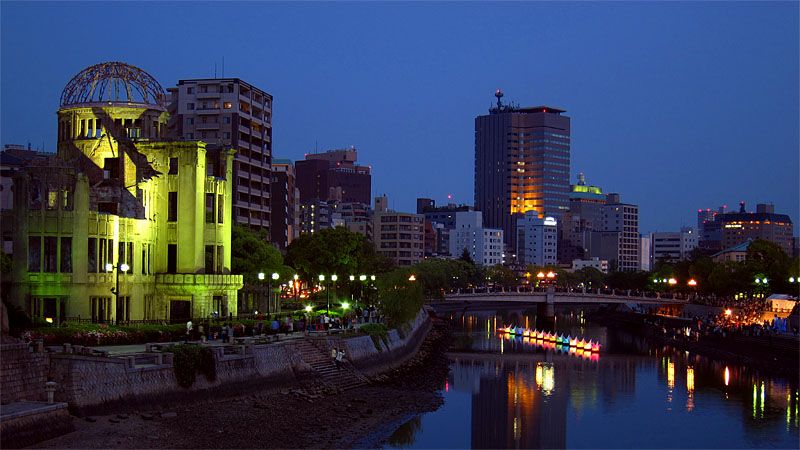