Sometimes Japan's smaller than I think. And sometimes I get lucky. Today I have once again proven that having no idea what I'm doing is the best way to travel. 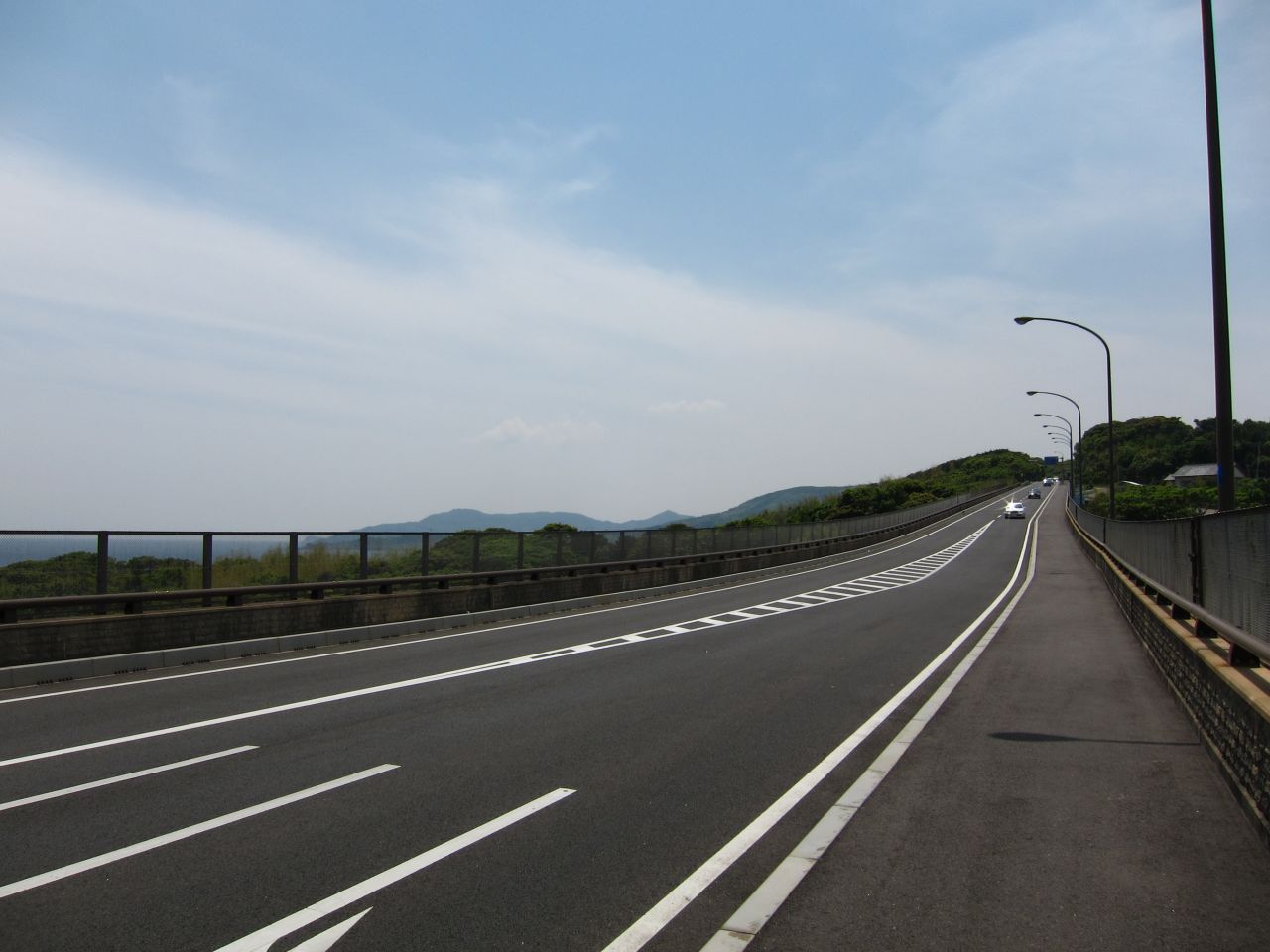 After my previous blogpost I set out on route 383 towards the south, immediately slowed down by the steep uphills. This is a very tough island. The uphills never end! I cycled for 30-40 minutes only uphill, no end in sight. It wasn't very steep, but just enough to hurt every muscle in my body over an extended period of time. 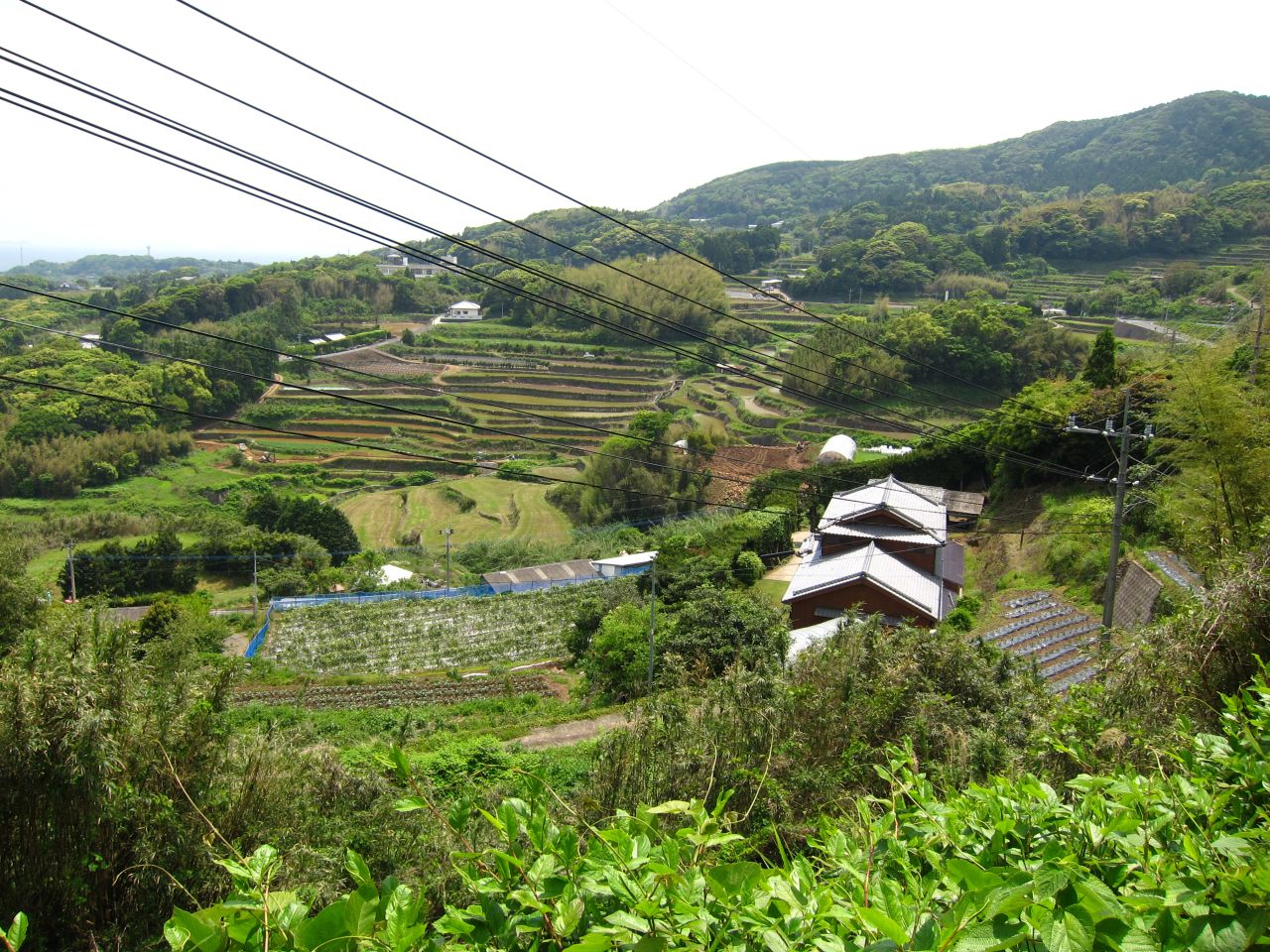 Power cables are unavoidable in Japan

The road was poor. Narrow and full of bumps and cracks. The downhills were ok but too bumpy and dangerous to go really fast, which made me go even faster because I got frustrated with the road and wanted it to end. (The road, not my life). I probably went over some bumps a bit too fast, because my bicycle's been feeling a bit odd since that road. I can't quite locate any one particular component that's broken or bent, but somehow the balance feels off. At some points I thought that I had a flat tire and actually stopped to check once, but it was fine. I'm not sure what it is, but let's hope that it's gone tomorrow.

Despite the long mood-destroying uphills it was over before I knew it. The route was about 30-40 km's but somehow it all went by in a flash. I took 2 photos on the way, and those are the ones I posted here. I reached the south part of the island, located the ferry and went on my way. The ferry would take me to a place called Ainoura, about 10-15 kilometers from Sasebo, one of the bigger cities in this area. My plan was to cycle from Ainoura to the Sasebo area and find a place to sleep there.

Here is where the 'no idea what I'm doing' part comes into play. First of all, I was lucky to find a ferry line in operation at the south of the island, as I had not checked the ferry times at all. Second, it never even occurred to me that the ferry might only take passengers, not cars or bicycles. I realized this at the moment when a Japanese guy came towards the bench I was waiting on and told me the ferry was ready to board. I saw no ferry, all I saw was a tiny little passenger ship. I was expecting a huge bulky ship that you can drive your car onto. My bicycle barely fitted inside, and had trouble going up the boarding plank. Whoops.

Well, that was certainly lucky. Riding the ferry made me realize how awesome it is to be on the sea. I've always liked to be in the water, either by boat or swimming, and this ferry was kick-ass. Huge waves on the ocean yet this ship bumped over them really fast, I guess at about 40-50kph. Awesome.

Arriving at the port I squeezed my bicycle off the ferry and prepared for the 10km ride to Sasebo. Gloves, hat, route check, etc. I got on bicycle, rode about 50 meters and then had to stop in front of a traffic light with at the other side Sasebo train station. WTF? I think maybe I got on the wrong ferry. I never really asked anyone where the ferry was going because I thought there was only one, and both Google maps and my route book told me that the ferry goes to Ainoura. I'm really quite clueless as to how I ended up in Sasebo, but I'm not complaining. Three cheers for cluelessness. :D 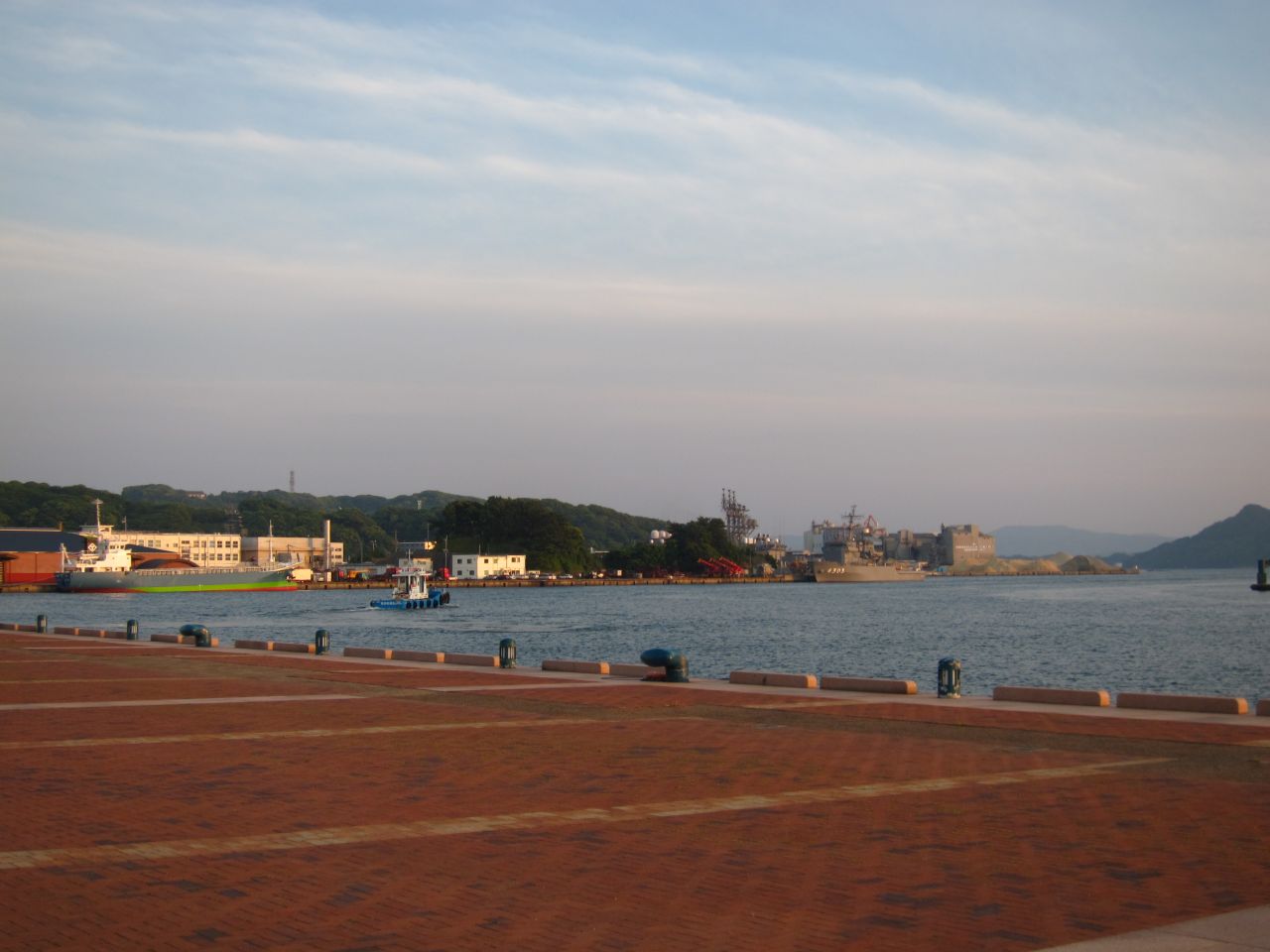 Finding accomodation was a breeze: I walked into the train station and asked the information-counter-woman to find me the cheapest hotel in town. She told me there was a ryokan just in front of the station. A ryokan is a 'Japanese hotel' according to my translator, but it's basically a youth hostel where you get your own room and don't talk to other people. Toilet and bathroom are shared.

Checking in to the ryokan is probably the worst I have ever been treated while in Japan. The obaasan (old woman. I would call her middle-aged, but no reason to be polite) didn't understand me at first when I asked if she had a room available tonight. I asked her twice in Japanese, got no response, then asked in English, and she answered me back in Japanese. She was very rude in the way of talking to me, and demanded the money upfront. Her attitude was so bad that I considered spending the extra money on a business hotel. This is really the closest I've ever gotten to walking away from a place. Anyway, she showed me to my room, asked me in Japanese in a horrible sarcastic voice: "Is this humble room good enough for you?". Having already paid, I decided to play nice and smiled at her and told her "Yes, it's great!". I think it's around this time that she caught on that I was not American, and she was nice to me ever since.

Sasebo is a port town, and the American navy presence in the city is annoyingly large, as I realized later while walking the streets. Besides the obvious American people wandering around there are more-than-usual steak restaurants and burger restaurants in this place. Avoiding those I went to a different restaurant and was promptly showed an English menu. They're definitely used to gaijins here. You can call me paranoid, but I think there's a connection between my being treated badly at a Japanese hotel, and an American base being present in the same city. That's my conclusion, feel free to draw your own. Maybe the old lady just had a bad day. There's still a lot of controversy about American bases in Japan. A hot discussion item these days is whether to move the American base on the Okinawa island to a different island. People on that island are protesting of course. But I've also heard older Japanese people saying that they tolerate the bases in Japan because Japan only has a self-defense force, and they need the Americans for protection. Sounds like mafia business to me. As far as I'm concerned all the American bases should disappear from Japan. It's a bad influence.

Speaking of influence (and otherwise unrelated to Americans), the convenience store sphere of influence has shifted once again. I remember way back in the Nagoya area all I saw was Circle K's, then in Hiroshima and Yamaguchi there were mostly Lawsons. The area I'm in now seems to have been conquered by Family Mart.

On a sun-related note, I'm developing a really weird sunburn on my left wrist that I finally figured out today. Despite applying factor 50 sunscreen every day the area below my watch developed a very strong, red tan. I applied the same sunscreen on my other wrist and it's evenly brown. The area above my watch (close to my hand) is also normally brown. I am theorizing that my big shiny watch is actually catching the sunlight and focusing it on the place below my watch, much like a magnifying glass. Very nasty. No more watch while cycling. 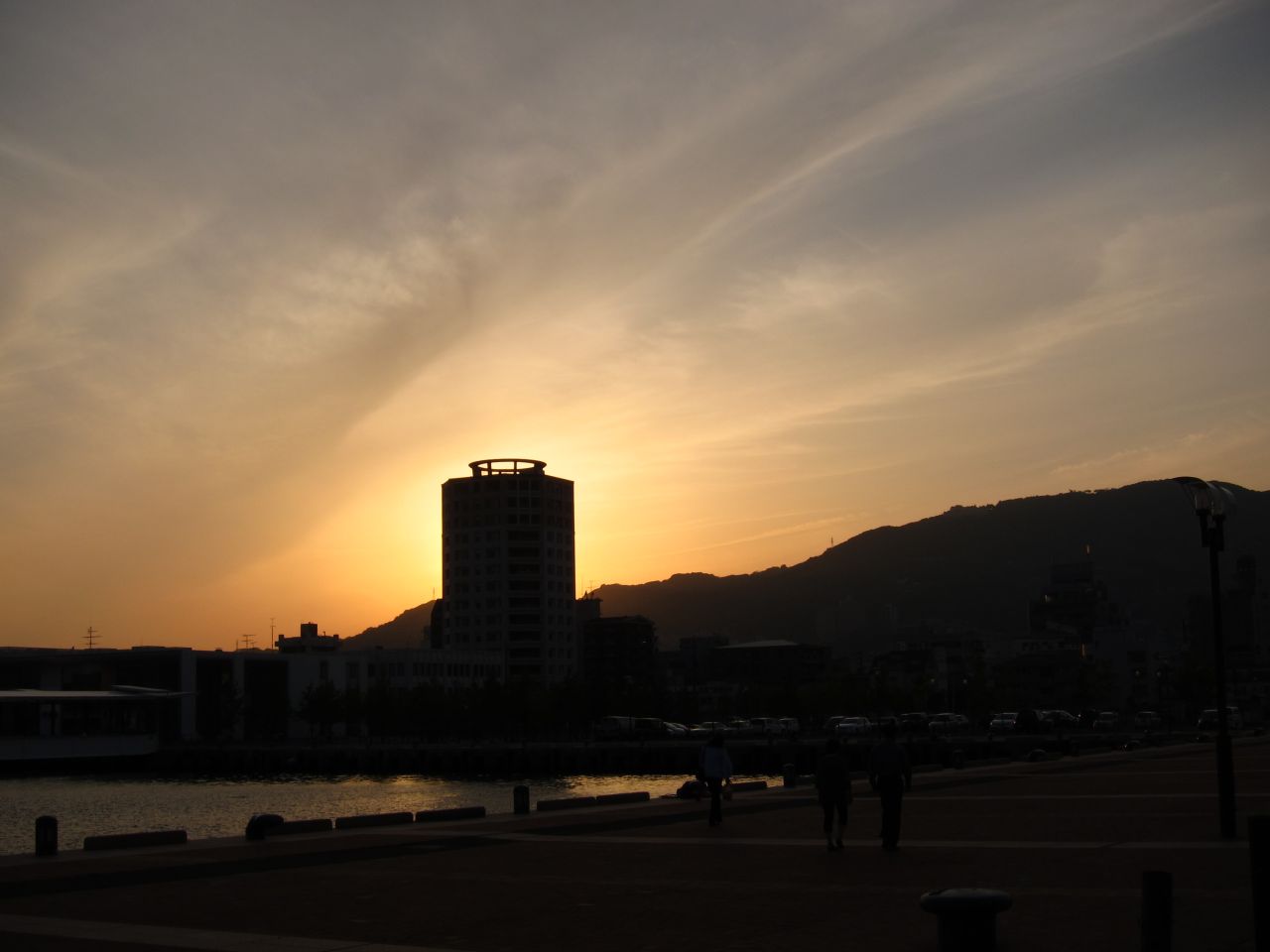