Amazingly, yesterday it did not rain when we set off for our trip. Four men: ultra-light Fumi, super-lively Hou, mega-pro Miro, and slightly-fat me. We set off for a two-day hike through the mountains of Yakushima. That the island is not as small as I originally thought became clear as the ferry approached the island: huge mountains could be seen from far away, surrounded by clouds. This is no small island, and the highest mountains are about 1800-1900 meters high. The island is famous mostly for its almost never-ending rain in the center of the island, but also because it has almost all of Japan's vegetation, from Hokkaido to Okinawa, spread out on different altitudes in the mountains. The mountain forest is really old, and is filled with mysterious places to see, with similarly mysterious names like Joumonsugi, Kigensugi and Shiratani Unsuikyou.

We took the bus in the morning and arrived at the starting point of the hiking trail at around 8:30AM. We took about an hour to confirm our route with the guides, and to file an 'intent-to-travel' form. This form is required so that people know where you are going and how long you will take, so that they can look for you if you turn up missing. My first time. o_0 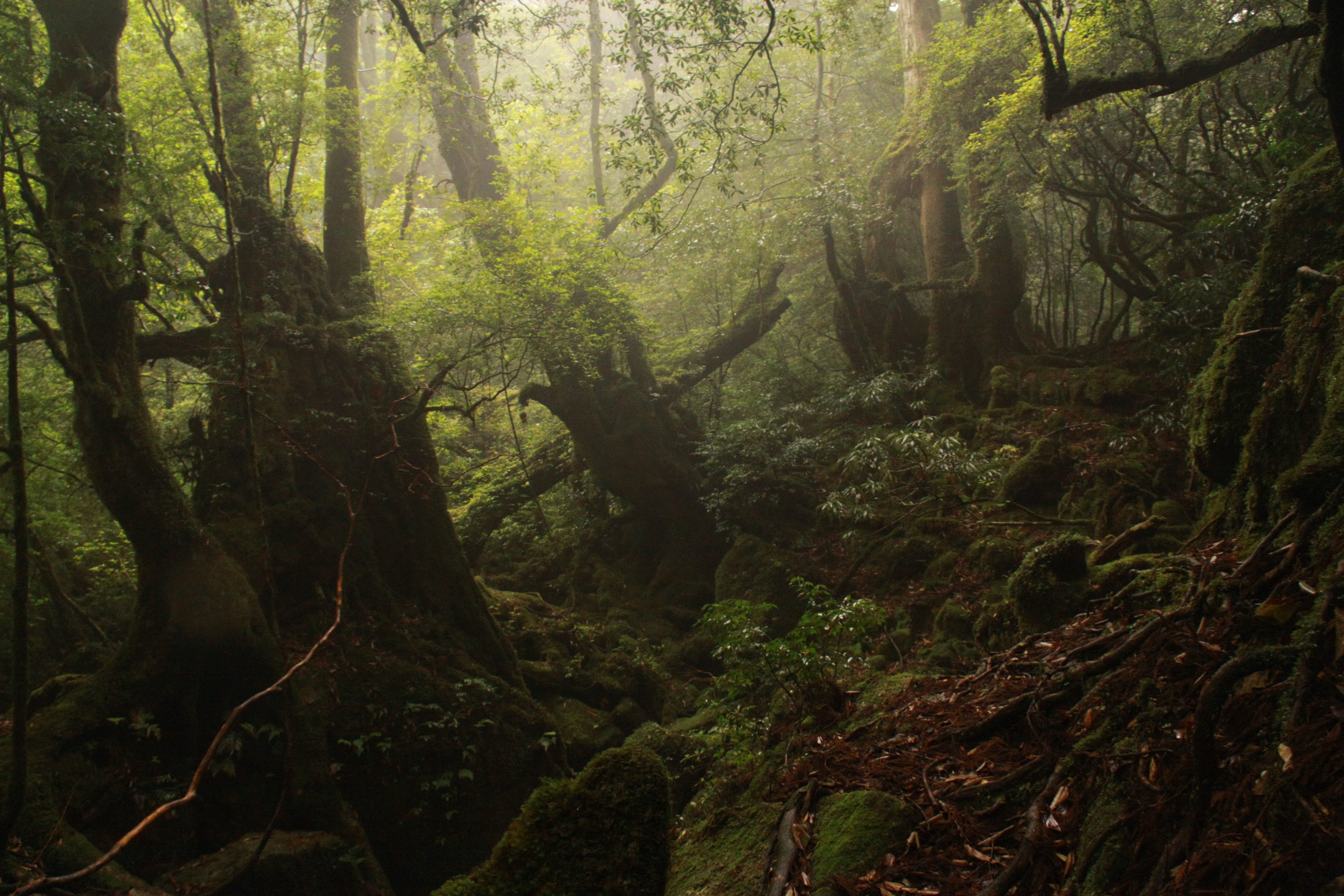 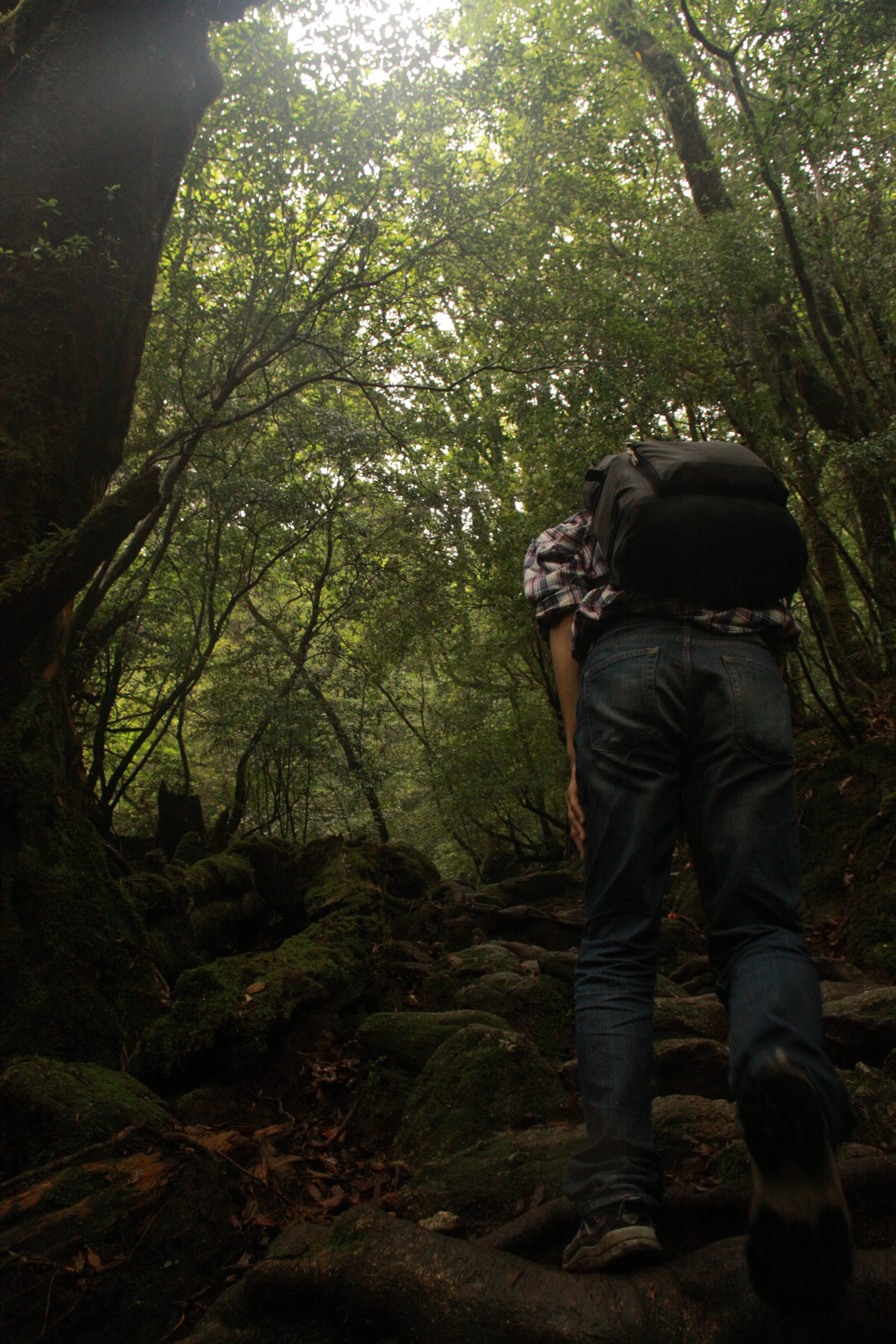 Hiking in the dry

We started from Shiratani Unsuikyou and spent the whole day hiking towards a mountain hut called Shin-Takatsuka Goya where we would spend the night. The hike was amazing. We started out at the place where the anime called Mononoke Hime was based on. A very strange place, but unfortunately it didn't last too long. After that we hiked a long way through the forest until we came to a huge rock in the middle of nowhere and could go no further. It offered us a beautiful view of the valley below. We backtracked a bit and found the abandoned railway tracks along which a small train used to run that belonged to a wood-cutting company. It seems that it's rarely or never used these days, but it's one of the most important hiking routes in the center of the island. 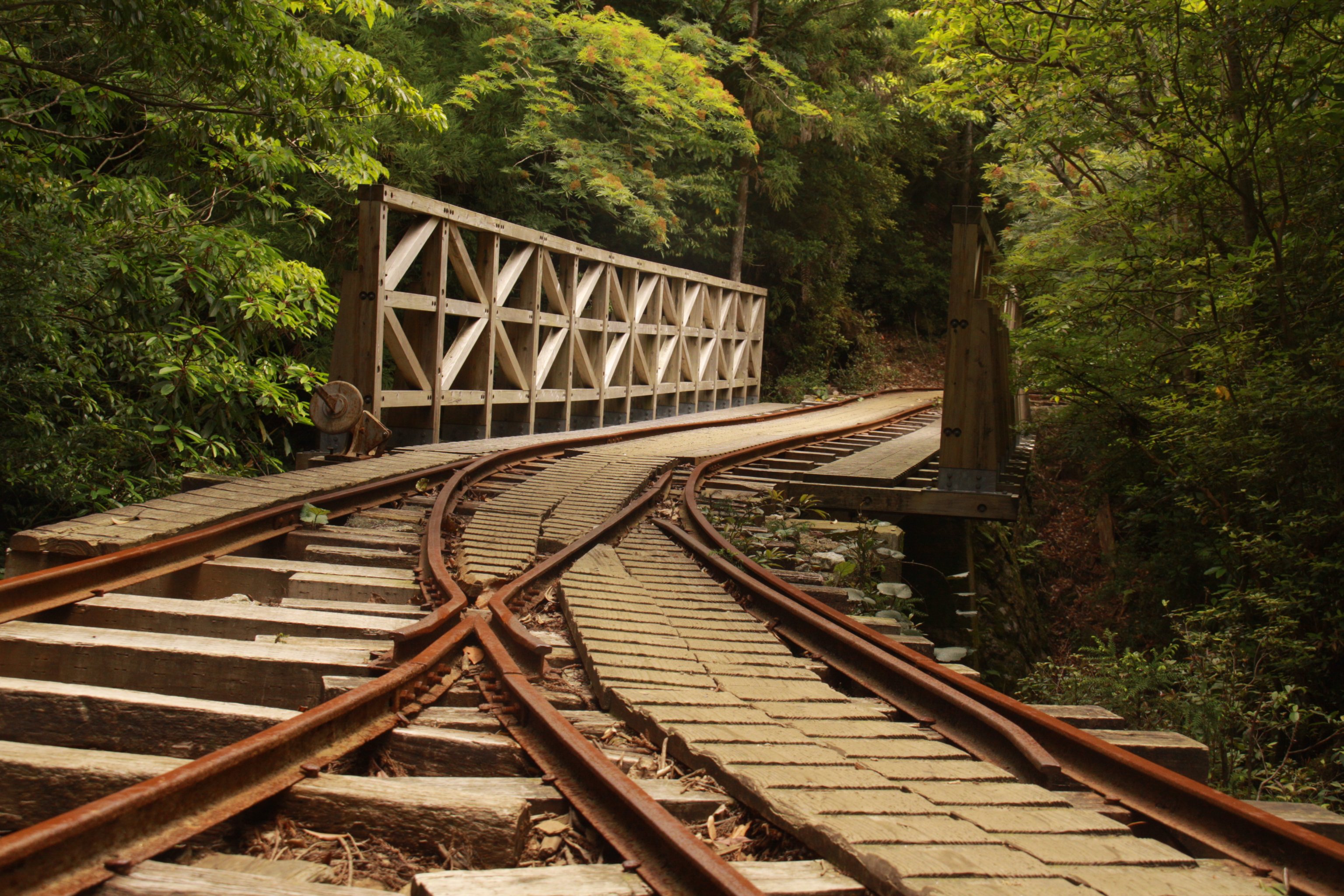 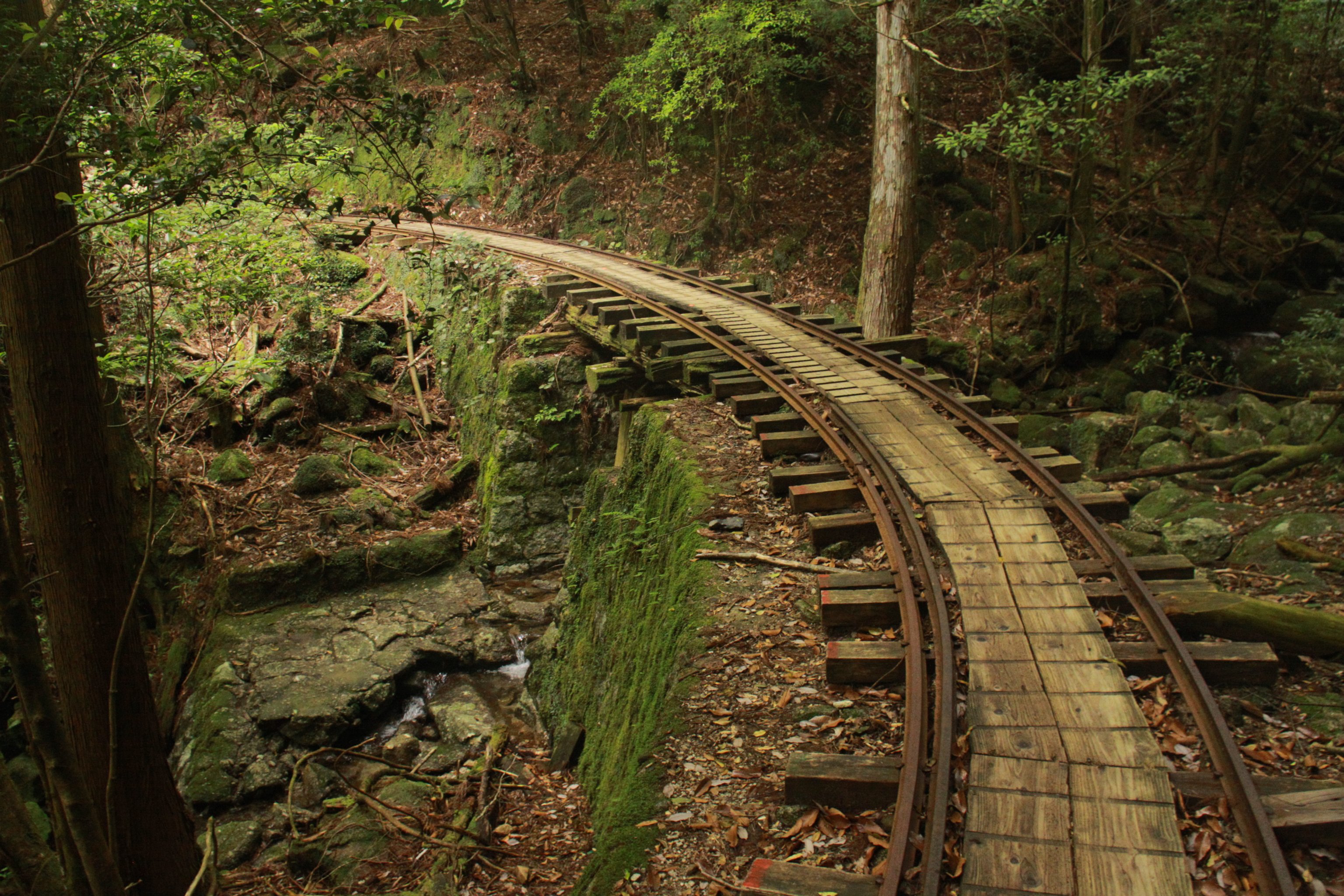 On occasion a wild deer would appear alongside the hiking trail, not afraid at all of people until you got too close to them. 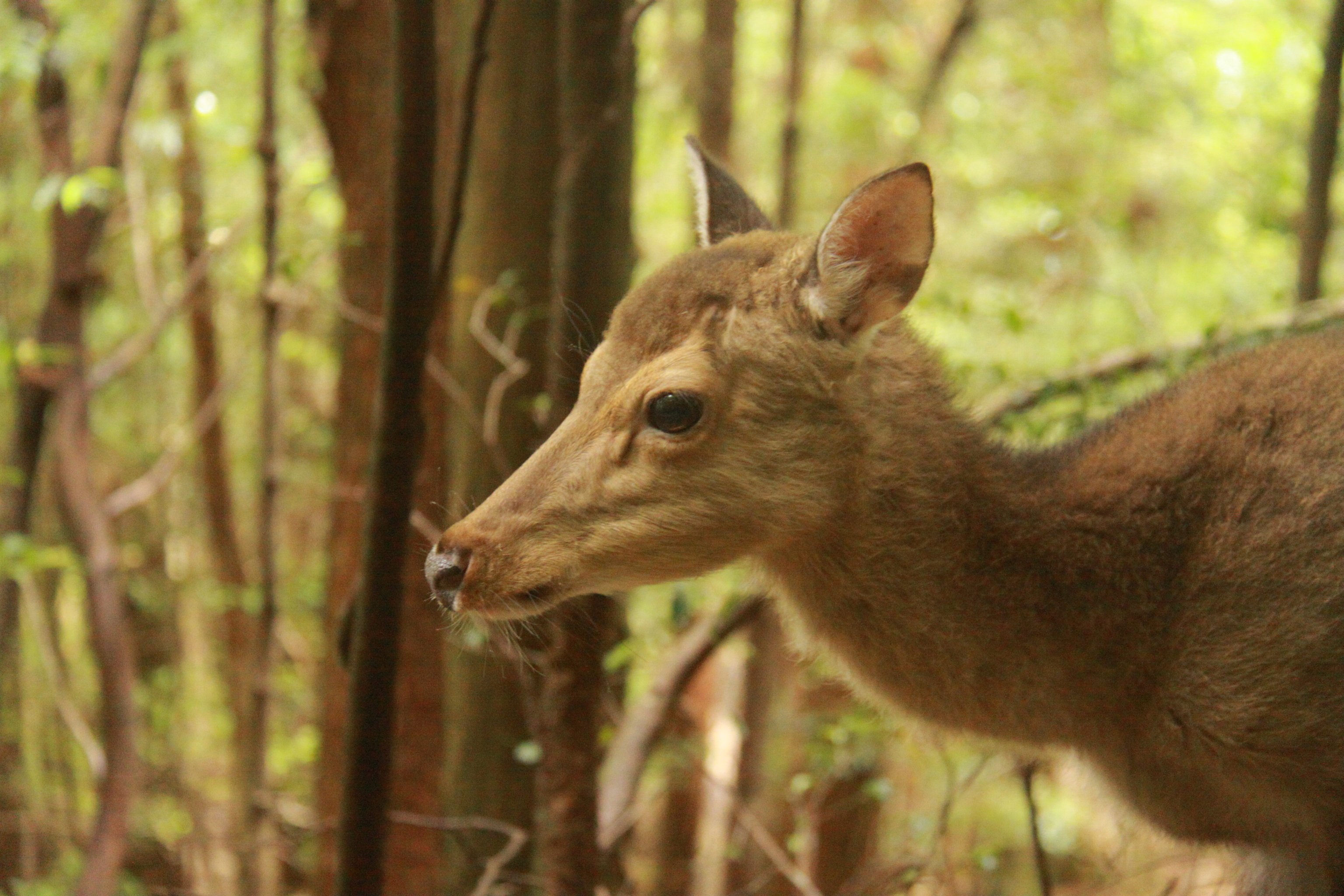 The hike along the train tracks took long, a bit too long for my taste, but eventually we reached the first mountain hit, which we would skip in favor of another hut about an hour away. The smell coming from the hut was incredible: an intense toiletty stink that I have never smelt before. Fortunately our hut turned out to be less smelly, although the nearby toilet was the dirtiest and smelliest toilet I have ever used (for reference: it used to be a public toilet near the great wall in China). The best part of being high up in the mountains with nothing else around is that you can drink the mountain water right from the river. And it tastes more delicious than any mineral water I have ever tasted.

As we walked along we passed along many beautiful natural sights, during the second half of the day the number of hikers got less and less. We had passed the point of no return where it would take too long to go back and catch the last bus. From there on we only saw people who were planning to spend the night. 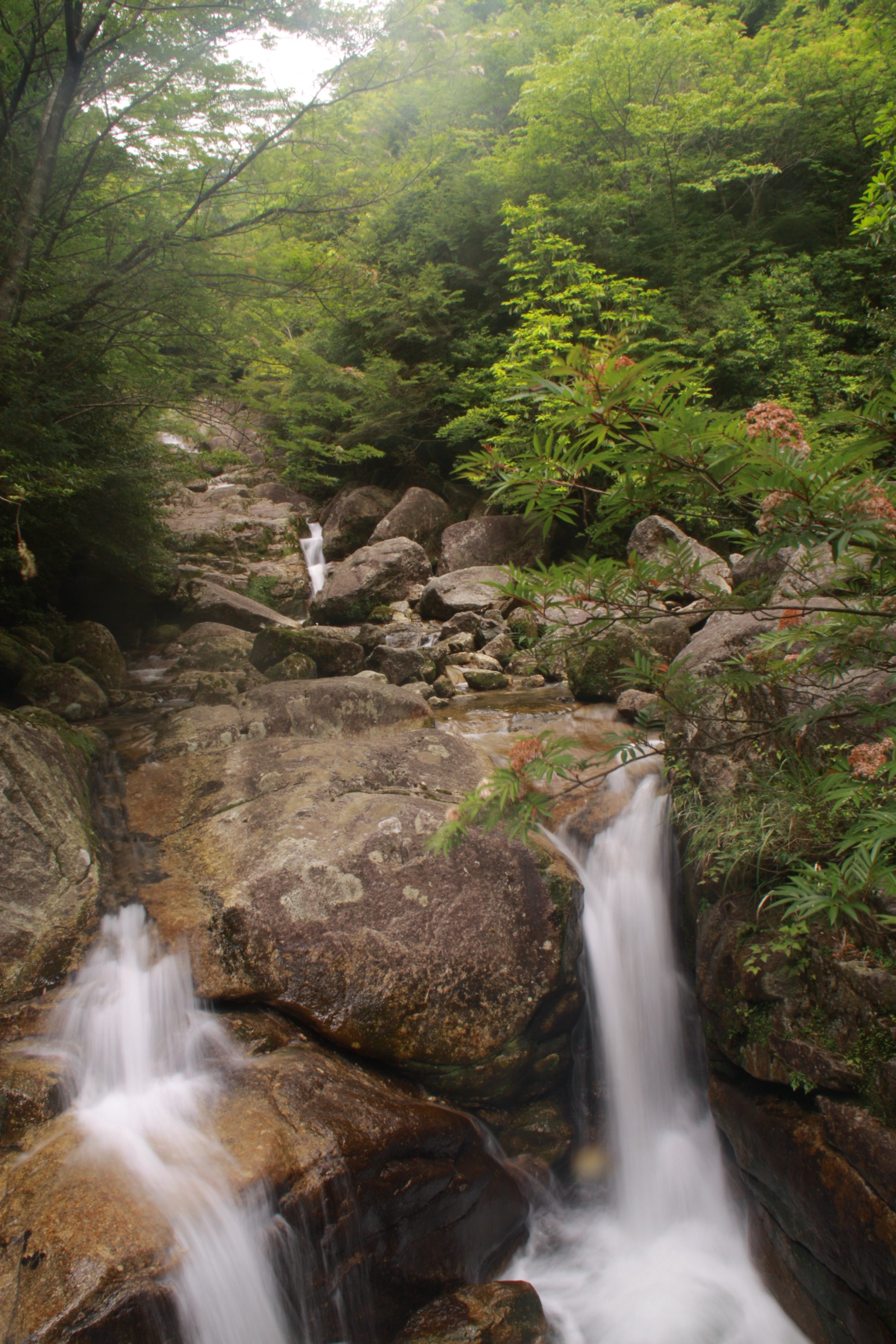 We reached a tree called Joumon Sugi, which is the oldest tree in the forest and supposedly between 2000 and 7000 years old. 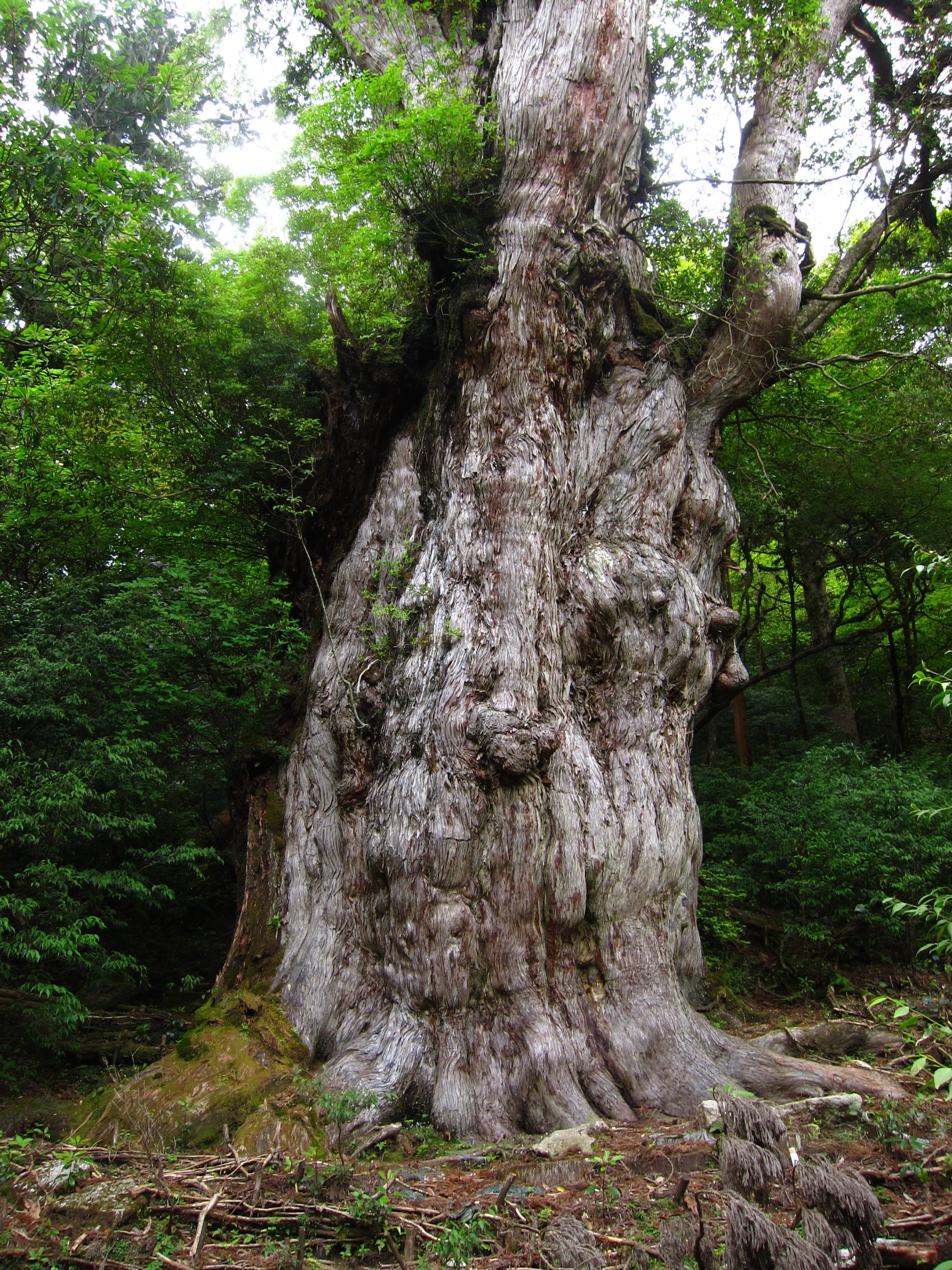 Irregardless of whether it's the oldest tree in the forest, just being around it is impressive. I really enjoyed sitting there in the middle of the forest, breathing the fresh air, looking out at all the old trees. As lame as it sounds, I don't think I've ever felt as close to nature as I did that moment. That nature can be strange sometimes was proven shortly thereafter when we witnessed a deer chewing on a dead deer's skull. 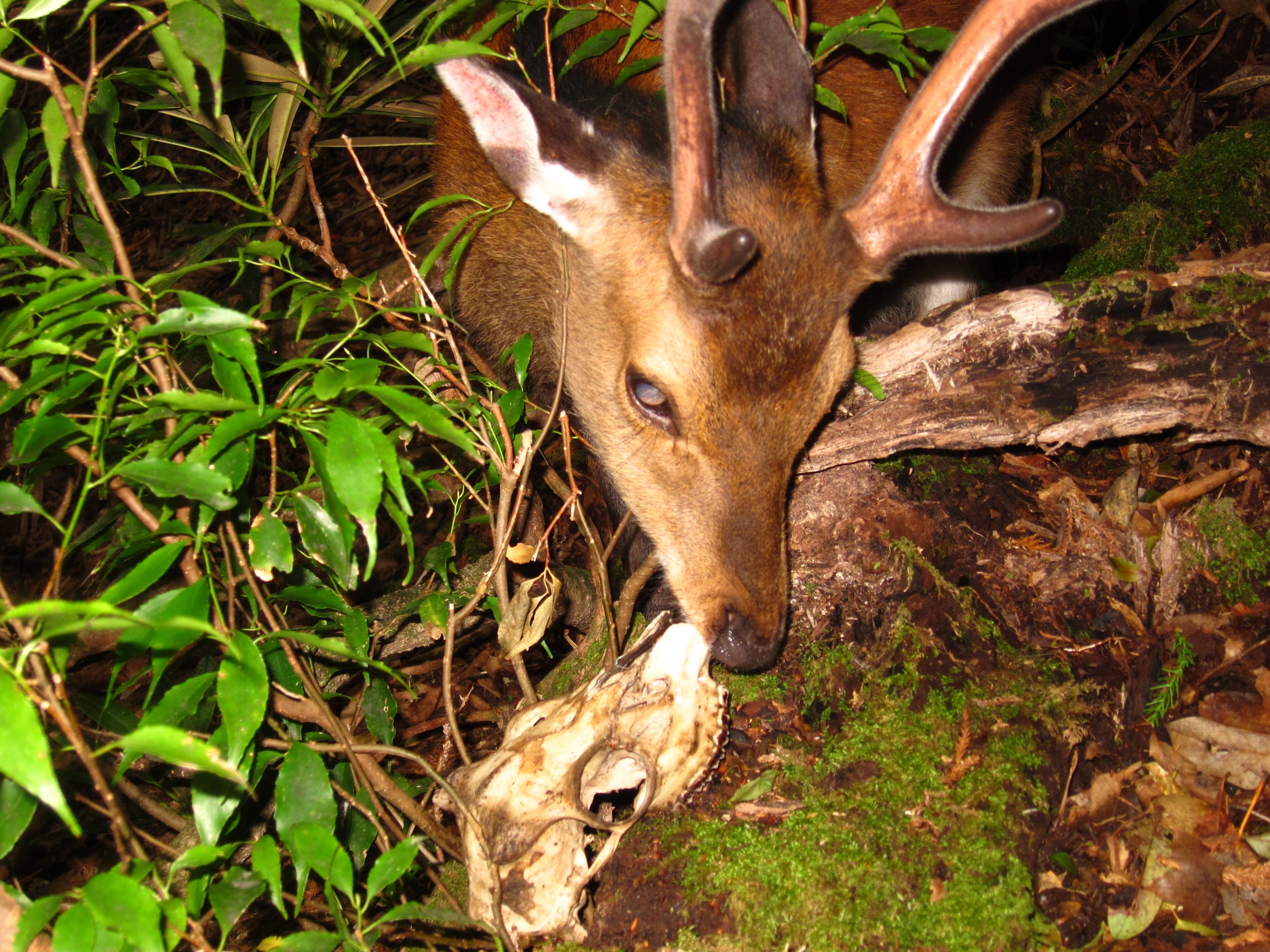 Walking on, we eventually reached our sleeping place: Shin-takatsuka hut. 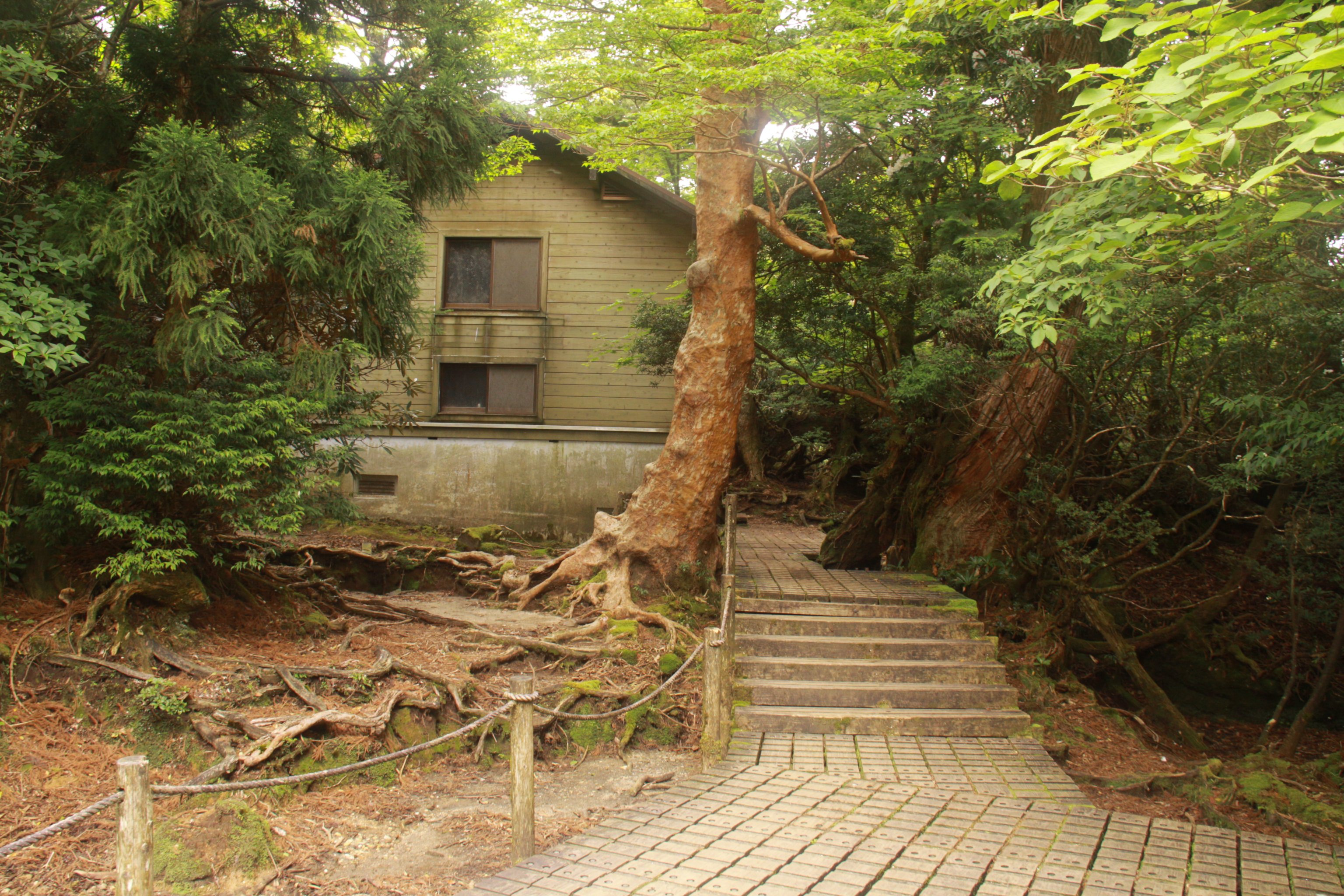 Our place for the night 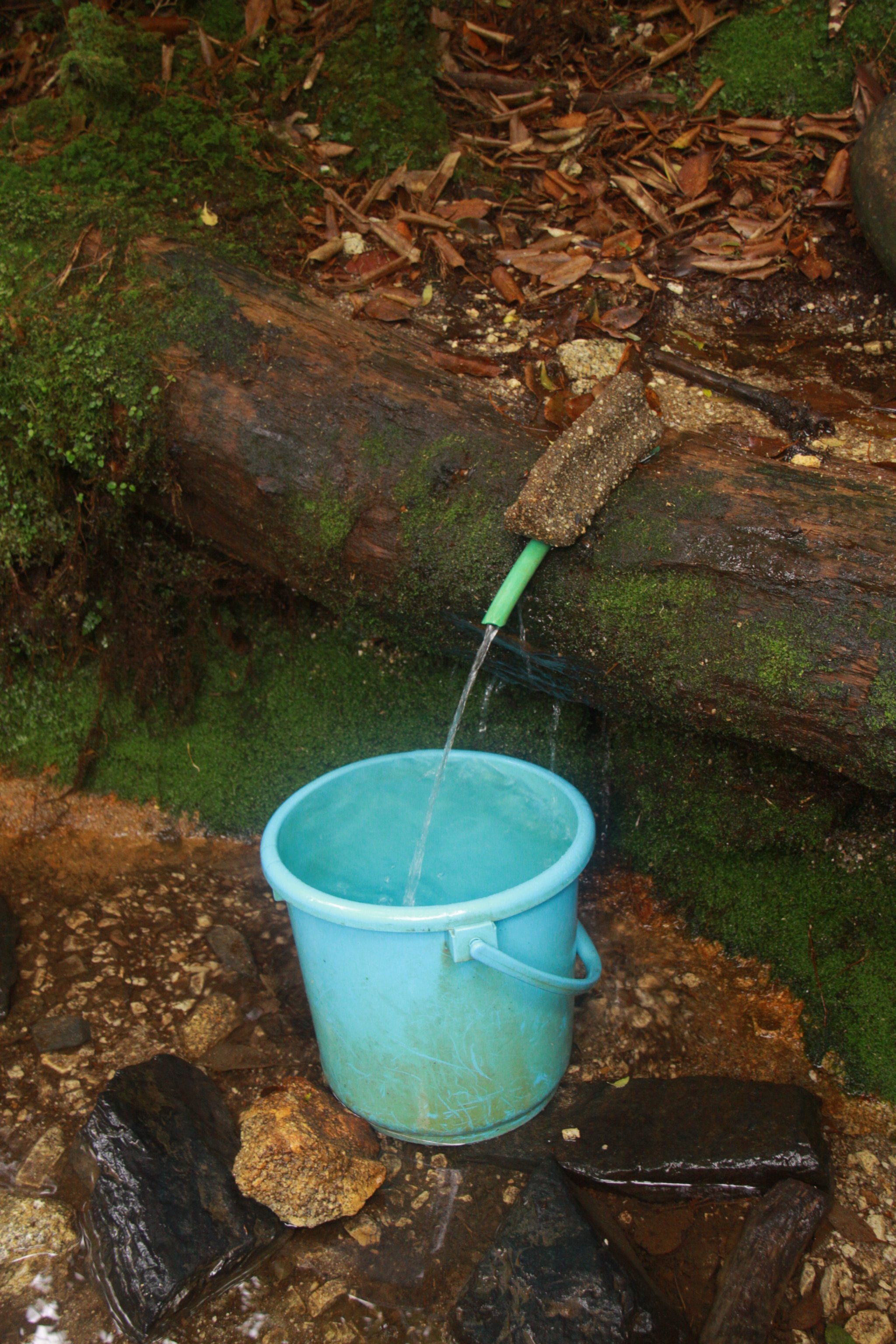 Our lack of preparation started to become apparent as the night fell, and three of us (four) had no mats to sleep on. Fortunately the mountain hut had some leftovers that we could use. Being at an altitude of 1500 meters the night was cold, very cold. I've experienced colder nights at the beginning of my trip, but this is not something I was prepared for on a sub-tropical island. When we woke up at 5AM the rain was pouring down, and the island finally showed its true nature.

Fumi and I were worried about the distance we were about to travel, which was about twice as much as yesterday, and we would have to travel in the rain. Miro quickly convinced us that the trip was absolutely possible, and off we went. The hike took us up many slopes until we finally came close to the highest mountain of the island: Miya-no-ura-dake. Climbing the bit between 1500m and 1900m was interesting, and the scenery changed a lot. The trees became less sub-tropical and more like the ones near Tokyo, and strange flowers started to appear that you would otherwise not see at such an altitude. Eventually we climbed above the trees and found only low foliage and huge rocks on our way. The rocks were so steep and slippery that we had to use ropes to climb them. And during all this time the rain kept pouring down.. By this time most of us were completely drenched.

From the highest point the trail followed a mountain range, involving a lot of consecutive uphills and downhills, all of them more difficult than any mountain I've ever hiked in the Tokyo area, but none of them extremely difficult. We were all kind of in a hurry for the whole day because the only bus would leave at 4PM, and after that there would be nothing. The map and the people we met told us that the hike would take 7 to 8 hours, but we did it in 6 and a half. And we could have done it faster if I had not injured my knee.

My left knee had hurt a little bit yesterday when we arrived at the mountain hut, but I thought it was just muscle ache and went to sleep. The next day everything was fine until long after we passed the highest point, but just before reaching the marsh the pain suddenly got worse, and I had a lot of trouble going downhill. The only thing to do was to go forward so we could reach the nearest exit, but by the time my knee seriously started to hurt the exit (Tozanguchi) was still two hours away. The pain got worse and worse as I went along, and the final kilometer cost me a lot of energy and a lot of pain.

Because we had arrived at the exit about 2-3 hours earlier than we expected, and because we had no other options, we called suspicious old weird guy to pick us up, and negotiated a fee cheaper than the bus fee. He took us back to the town and the youth hostel, which is where I am typing this from now. When the guy finally picked us up we had waited at the bus stop for half an hour in the pouring rain, and we were all soaking wet, tired and near hypothermia. But we made it. An extreme experience brought to a good end!

Well, good end... I have to catch a ferry to Kagoshima tomorrow, and then cycle 80 kilometers to Shibushi. I hope my knee can handle that. If that plan fails, I can still send my luggage to Tokyo via post and take a train, so there's no real pressure. I'll just see how it goes. More later!

(You will notice that I have no photos of the second day. This is because it was raining the whole day and I actually did not take any photos, a first on my trip.)