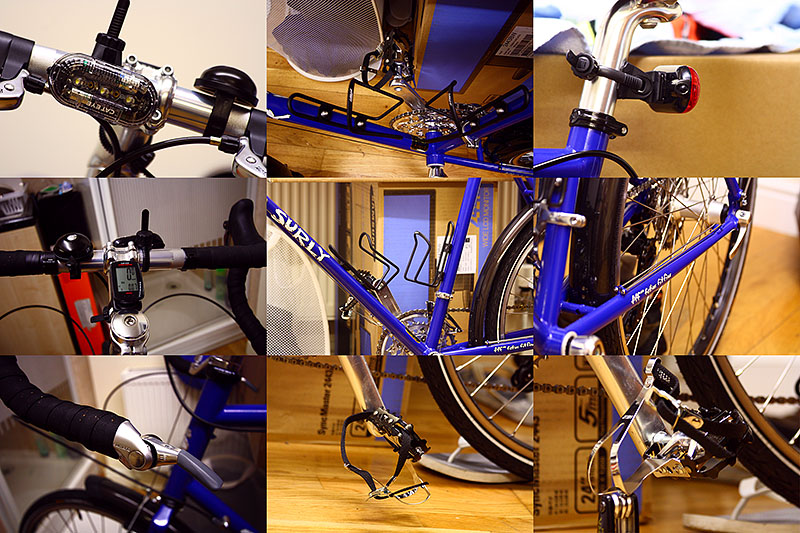 Today I fitted all the goodies that arrived earlier this week: lights, cyclocomp, bottle holders and toe clips + straps. The middle shot on the right is of the cool spoke holder area on the lower bar. Everything's still very shiny, perhaps a little bit too much. I'd better get out there and dirty it up a little bit.

The toe straps seemed quite tight when I tried them out just now. Definitely not as easy to get into as my old worn-out Giant's. When I bought the pedals the bike shop tried to convince me to go for clipless + cleated shoes, but I just can't bring myself to it. In my mind people who use clipless shoes are the ones that dress in skintight spandex and drive like madmen. I'm just a guy who wants to carry a boatload of luggage around a country. Cages and straps fit that image, clips don't.

Although not very visible in the photos, I had the bike shop remove the front rack. I went there with bike and pannier this week to get their opinion on how to carry more stuff on the front, but I met with large resistance. On the phone they kept saying that the rack they got me was 'the biggest rack there is', even though it was tiny. The me of three years ago would have let that slide and just gone to a different bike shop, but I'm feeling assertive lately, so I kindly told them that was bullshit and there's many bigger racks to find online, including the one that Surly makes. So I drove in for a little advice, which turned out useless, as they now tried to sell me smaller front panniers rather than a larger rack. This is it, you know: the fight between the spandexies and the touries. It exists. My encounter is proof of it. Although the Surly rack is massively heavy I decided to order it anyway, my decision perhaps assisted by the anti-cargo-hauler sentiment of the shop people. Yes, I'm a niche market. Still better than wearing spandex.