Tougher than it thinks

A lot of things happened today, and that's good. Even if some things were not good. But most things were amazing.

Let's start at the beginning. I'm still jetlagged and woke up way too early again.I checked out at 7 and started cycling north. I was expecting to go rural immediately but Shimonoseki's suburbs stretched out for quite a bit, and for a long time I was cycling parallel to a busy road. It was very windy and I had to lean into the wind quite a bit. Fortunately that got a lot better later in the day.

I veered off the main road to try and find the westernmost point of Honshu. It was a good 3 kilometers that I had to do twice, since there was no other way back from there, but it was absolutely worth it. A spectacular view with no one else around. At least, not at first. I was soon visited by first a biker and then a random guy, who both, when I told them that I was intending to camp tonight, told me that no camp site will be open since it's not July yet and it's too cold. Bullshit. 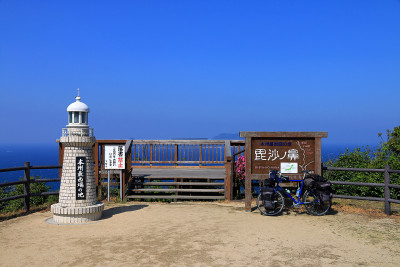 Still, I kept it in mind as I cycled along and decided to play it safe, stopping at the first camp site I find that is not closed. I headed north again on an amazingly beautiful road through a nice valley, with mountains on either side and large Japanese houses. The weather was perfect as well, which made it just one of those golden moments of cycling trips, where everything is perfect. It's the exact moment I was hoping for when I was planning this trip. You never know if the combination of route and weather aligns in this way, but today it did, and I was cycling along with a big huge grin on my face. 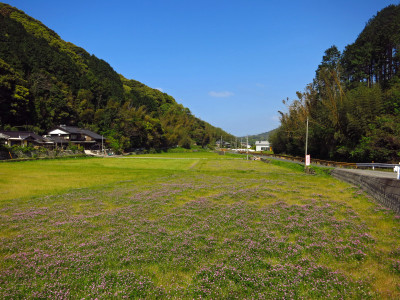 Wilflife: I saw a tiny shiny dark red frog today. And also what I think was a Japanese Giant Hornet, who didn't appreciate it that I parked my bicycle next to its bush.

After the pretty valley road I was back on the main route going north, and I was starting to feel some saddle pain. Despite my training I still seem to get sore-ish at around 30km. But this time it didn't get much worse throughout the day, which is good. I had a long lunch break at a conbini where I forced myself to sit still for at least 30 minutes before continuing. I think that helped a lot.

As I reached the northwestern corner of Honshu I investigated a campsite that I put on my map before I left. It was indeed very closed, but also in the middle of nowhere and with a perfect view. It seemed like an ideal place to camp, so I made my mind up to stay there tonight. It was only 2AM though so I figured I might as well cycle along a bit further and visit the bridge to Tsushima. It was only a few kilometers further but it was a tough cycle, with some steep climbs, and I was starting to run out of energy. 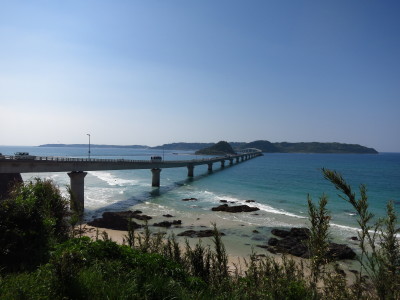 I decided to cycle on a bit further to a nearby port time in the hope of finding a conbini or supermarket, since I didn't have a proper meal for the evening yet. Unfortunately there was absolutely nothing there. I took a different way back which should have taken me to the main road first, which I could then cycle back on to get back to my chosen campsite, but I missed a turning and ended up even further away from it. So far that going back felt like a chore, and since it was still early I decided to cycle onwards and try my luck.

It was a few kilometers after deciding that that fatigue really set in. I had to take a break because my legs just didn't feel like doing anything anymore. Some bread and chocolate helped recharge me, but I was still feeling pretty drained for the rest of the cycle. I came across a nice park but was told that I couldn't camp there. There were some more potential opportunity camp spots, but none of them exactly brilliant. In the end I came up to the next camp site that I had marked on my map, just around 4PM.

The camp site was open and the two old men running it were very happy to set me up with a spot. Not surprising given that they charged me 1600 yen, or about a third of a hotel room, for a night's stay. What a ripoff. But I was too tired to care. They asked me if I wanted to use the shower and seemed extremely surprised when I said yes. They were very difficult to understand and kept switching back to their local accent.

Shower surprise number one: it's a coin shower. You'd think that for 1600 yen the damn shower is included, but no. Surprise number two: the hot water didn't work. So I went back to the reception where the two oldies were just leaving and I asked them if they could fix the shower. One guy stayed behind and let me try many times in many different showers, all the time slipping me 100 yen coins back every time it failed. It never did succeed in the end, and I had to do with deodorant towels. I should've just showed up here after 5PM and stayed here for free. The place provides no added value.

Still, the view from here is pretty damn amazing, and I enjoyed a nice sunset while eating my dinner of beef jerky and curry bread. I'm in my tent as I'm writing this and it's getting really cold. Good thing my sleeping bag is quality. That was definitely a worthwhile investment. Also, I lost my sunscreen somewhere. I think I left it leaning onto something on my bike and then cycled off, so it must have fallen off. I rummaged around in my panniers and found another smaller bottle of sunscreen from a previous cycling trip. Lucky, ish.

Tomorrow should be interesting. I kind of stopped the detailed map-planning midway into the area I will reach tomorrow. I'm pretty sure I'll be looking for a cheap hotel, but it depends on the circumstances I guess. I might end up camping again. I might not have a choice since I'm pretty far away from convenience right now. The last time I saw a conbini was at lunch, and that's an eternity for Japan standards.

Posted in Photography , Spirit of Japan 3