Beaten by an old man 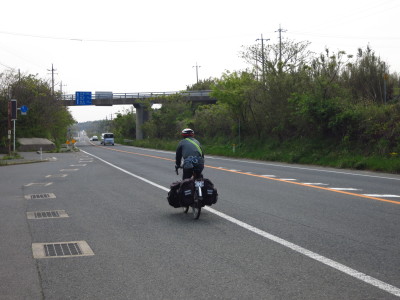 The Man, The Legend

Today was a tough day. The way to Tottori was a long 90+km road. Unending. I had done about 20 kilometers and was suffering up a hill when I heard a 'konnichiwa' from my right, and before I knew it this old man had gone past me! He seemed to have no trouble with the hill at all. Despite all of his luggage, which seemed heavier than mine, he was spinning the pedals like crazy, doing a cadence of at least 70rpm. I don't think I've ever seen anyone on a loaded touring bike tackle a hill at that cadence. My usual cadence doesn't really go past 60rpm, and on hills I'm closer to 50. Mad! And he kept it up, too.

Naturally I couldn't just let this slide. He was the first touring cyclists I've spotted on this trip so I wasn't going to let him get off with just a 'konnichiwa'. I pushed myself a bit.. well, a lot.. and managed to catch up with him. He slowed down a little for another uphill bit and I asked him a few of the usual questions. He didn't seem very interested in talking, or rather, very interested in not talking, so I let him be and hung back. From there on I managed to keep on his pace for a while. I took some stand-and-drink breaks and eventually lost sight of him.

But not much later I found him again! We were both going to Tottori, and there's really only one road that goes to Tottori (at least, only one that bicycles are allowed on). He was looking at his map, trying to figure out which way to go. I showed him my phone maps and told him that going straight was probably the safest bet, if not the most direct route. He said yes and promptly ignored me and went left. I figured I might as well follow him, and it was a good thing too because his way was much more direct.

I kept behind him for quite a while, keeping up with his pace but definitely breaking a sweat and pushing quite hard. Eventually he pulled in for a break and I did so too. There I learned of this legend's name, his purpose, and his age. I tried to get him to exchange email addresses too but he said he did not use email. I should not have been surprised by that, I guess.

He had already done the distance of my trip, going the opposite direction from Tokyo to Shimonoseki, and was now on his way back. He started the day at Matsue, a town I passed yesterday, at least 30 kilometers away! When I asked him how much he usually cycled on an average day, he said: 120 to 140 kilometers. Holy crap. And then I just had to know. I had to ask how old he was. So I asked him.

I still can't believe it. I had estimated him at at least 50, probably 55-ish, and I thought it goddamn impressive for a 55-year-old to be cycling the same distance I was doing. But it was far, far more impressive than that. He was doing way more distance than I was doing, and at that age too. I imagine when I'm 69 years old, if I try to cycle my legs will just fall off.

I didn't need more convincing of this legend's abilities, but I got it anyway. I passed him again a bit later on when he took a break somewhere, and I took the opportunity to push myself a bit harder for the next stretch, maybe 15-20 kilometers or so. Eventually I completely exhausted myself and had to take a mandatory lunch break at some middle-of-nowhere bus stop. I was there for less than 10 minutes when the old man showed up again, stopped to ask me where I passed him, which he seemed particularly discontent about, and then cycled onwards again, still with that ridiculous cadence. For all the rest of the day, every time I thought of that fantastic person I couldn't help but wow. I tip my hat to you, good sir. May you have good travels.