Because camping I woke up early. I always end up going to sleep early when camping because it's just so cold outside, so I tend to wake up early too. I had left a bit of tent flap open so luckily did not have any issues with tent moisture today. After a little packing I was on my way to Matsumoto. 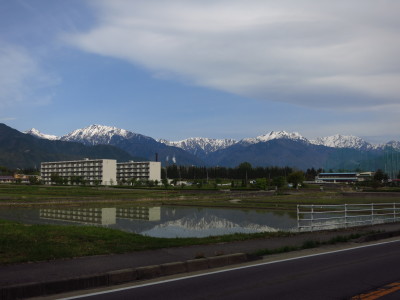 Matsumoto is downhill! It was a very gently constant 1-2% downhill, which made for an easy cycle. The road I had chosen wasn't too wide and there was a fair bit of traffic, but it didn't bother me much. Not after yesterday. Those tunnels really put me on edge, but they also put everything else in perspective. I am able to relax more now.

Due to my early start and the downhill road I actually arrived in Matsumoto at 9:30AM. Can't have that! I was planning to have an easy day, but that's just a bit too easy. I used the station wifi to check out the route towards lake Suwa and booked myself a cheap hotel there. It was a good 35 kilometers away, but I have the whole day, so why not.

I don't regret that decision, especially because I had planned to do Matsumoto - Kofu in one leg, but damn that was tough. I had chosen a fairly direct route via a smaller road, which was fine while I was in a suburban area, but the road eventually changed into a small side road parallel to the big highway, and that's where the trouble began.

The big highway had a steady incline up to the mountain pass that connects the Matsumoto area with the lake Suwa area. The side road however, did not. It would go up extremely steeply to connect to a bridge over the highway, then go down extremely steeply again to a normal height. So instead of suffering normally on an 8%-ish incline, I did a 15% uphill, then a ±5% downhill, then a 15% uphill again. And again. And again. I was completely exhausted by the time I actually reached the mountain pass.

Since I had climbed that much already to even reach the mountain pass I was hoping that it would just go down again to connect with the lake area. After every hill, every corner, I hoped to see the end of the 'slow traffic' line that signifies a steep uphill road, and after every hill and every corner I was wrong. It was only at the very end of the mountain pass, when I was already able to see the lake, that the road started to go down again. According to the stats I've climbed 600 meters less than yesterday, but it felt a lot worse. At least yesterday's road was gradual and predictable. 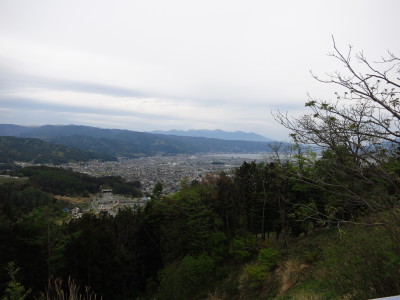 It had been mildly cloudy all day but when I finally entered the lake Suwa area it really got gray. The cycling path around the lake was utter crap. It was full of bumps and side roads and steep edges. Definitely not the way you should design a cycle path. The dark clouds soon turned into rain just before I found my hotel. Hopefully it'll be better tomorrow.