Well, that was a short cycle, but it took forever. I managed to stay somewhat dry by taking shelter every time the rain got stronger, and then waited until it had stopped or gotten less. It took about 3-4 shelter stops to get halfway, and then I got to a better bit of mountain where the rain didn't just linger, and I managed to stay dry right until near the end. As it turns out my final destination today was exactly where the rain clouds were, as they were blocked by the surrounding mountains. It wasn't too bad though, no harsh downpours, just soft sprinkles. 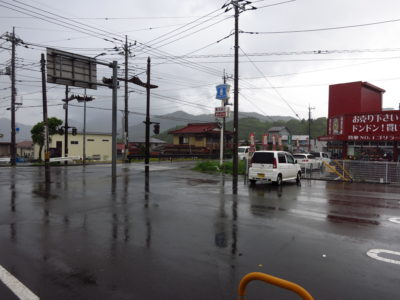 Yesterday evening I told myself that I'd decide later whether to make the descent to Atsugi or not, but after checking the weather I did eventually decide to book the cheapest accommodation I could find near Yamanakako. It was the perfect location, too, and since it was on booking.com in a fairly touristy destination I expected my hotel to be fairly standard. I knew it was a ryokan, a Japanese inn, but I didn't expect there to be nobody there when I arrived.

Eventually a very old lady showed up, followed by an almost-as-old lady who I can only assume is her daughter. I had gotten there quite early, and they had just returned from a grave visit, which is a thing Japanese people do to mourn those that have passed away. That sure made me feel awkward...

They invited me in, and apparently the room wasn't ready and the toilet was broken, so they invited me in for tea first. They also gave me some really nice omiyage that tasted really good. I chatted with them a bit, told them where I was cycling from and to, etcetera. As I was talking with the younger lady the older lady was  on the phone talking to other hotels, and I distinctly got the impression that they were trying to put me up somewhere else, but the local accent was so thick that I found the conversation hard to follow. I asked about it and they said everything's fine, so I guess I must have misunderstood.

The room I'm in is a typical tatami room, slightly run-down for ryokan standards, but otherwise very pleasant. The view of the lake is fantastic, although right now the cloud coverage is so thick it pretty much touches the water. Tomorrow should be great though. I had a shower in the owner's house's shower room, since apparently the hotel's shared showers were not turned on or not clean or something. They really were not prepared to have a guest today, it seems. I like that. It's quirky. It's warm, dry and there's a conbini nearby. Way better than camping on a rainy day like this. 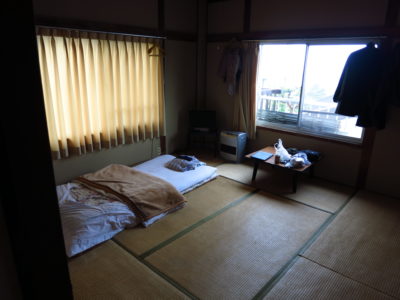 I have to admit I severely underestimated today. I guess I thought it would be a casual slow cycle to the next lake, but this lake is about 150 meters higher than the one I came from, so I had to climb a fair bit. For some reason, probably because I haven't cycled with luggage for a few days now, I've lost my cycling rhythm. I ended up doing way too high cadences uphill and just nearly ran out of breath a few times. I was also frustrated at climbing in the rain - since I was dressed for the rain, climbing just made me sweat like crazy in my windcoat, and I couldn't take it off either because then I'd get soaked by the rain. 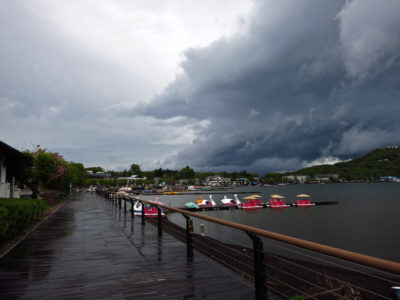 That said, cycling with luggage on felt really good. The bike felt stable again, and I could feel that my legs are still used to the effort needed to make the heavy bike move. If I hadn't taken camping equipment I could easily have gotten away with just two panniers, but that just fucks up the entire balance of the bike if the front isn't loaded and the back's really heavy. Much better to have four panniers only partially loaded.

Tomorrow there's still about a 100 meter climb. After that it's downhill almost all the way back to Atsugi. I'm really looking forward to taking photos along the way. I want to find some of the spots I've been to on those incredibly memorable first and second day of my first solo trip. It's still a good 70 kilometers back to Atsugi. But I've got time. It's not like I have anything better to do :)