And quite unexpectedly too. We were planning to go the setsubun festival today, which is a tradtional Japanese festival where you drive demons away from your house by throwing beans out the door of their house. But lo and behold, this is what I saw out of my window this morning, albeit with a bit more color in real life... 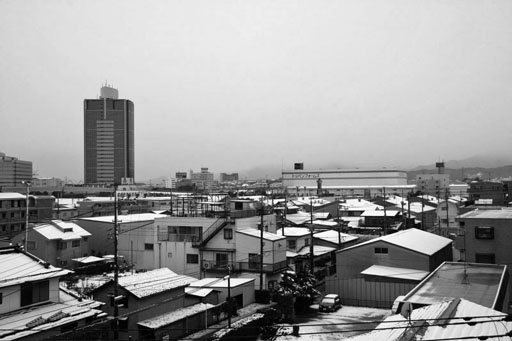 The black is the buildings. The white is the snow.

t seemed to be okay on my first encounter with the snow in Atsugi, but while riding the train to Tokyo the snow got worse and worse, and by the time I arrived in Shinjuku I was in a full-blown snowstorm.. Setsubun indeed being off, we ended up wandering around Akihabara and Yuurakuchou, close to Ginza district, the most rich neighborhood of Tokyo.Very very cold, but fun to see a part of Tokyo I hadn't been to yet. Saw a cool movie too: Kidz, but I can't seem to find too much information about it on the net..

Flashback to Thursday. Because my graphi

cs card's been kinda dead I haven't played games for months, so I ordered a new graphics card which finally arrived on Thursday. After installing the card the PC was completely dead though -____-. After some problem pinpointing I figured out that it was either the motherboard or the CPU that died.. Crap!

Figuring that it's better to fix the stupid PC once and for all, I went to Akihabara on Friday night after work to buy new components for a new PC. After a nice dinner I had to take the last train back home which was quite possibly the worst ride I have ever taken in Japan. I've never seen a place so crowded with me in the middle of it.

Saturday I spent the whole day backing up data and installing the new stuff, which fortunately works. Of course it never goes smoothly, and I ran into some compatibility problems with my power supply, that needed some creative fixing.  After a long day's work I was very pleased to see everything work like it should, so I made some time for a nice dinner at Outback steakhouse in Ebina with some friends ^_^ Of course dinner always takes longer than expected, and we ended up watching movies in my room until deep in the night. I was mostly fixing my PC though, and at the end of the final movie the PC was in perfect working condition. Mission accomplished!