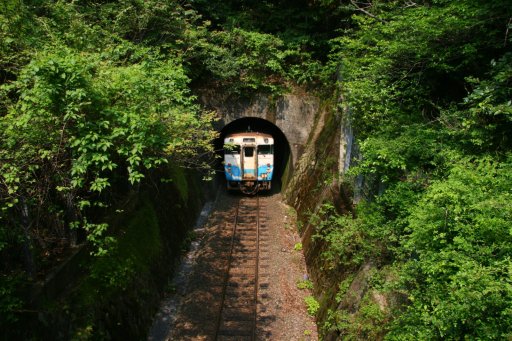 The next morning we got ready to cycle more south, but I found another problem with my bicycle. Yesterday, after transporting my bicycle by train, a spoke got loose from my wheel on one side, and I had to tie it to another spoke with a string. Today I found out that my rear wheel was not quite straight any more, and the ride it gave me was quite wobbly... T_T With no bicycle shop in sight this seemed like a hard one to fix, but it turned out to be not so bad. The wobbling was mostly caused by the tire hitting the rear brakes. After disabling the rear brakes the problem was largely gone, although I did take lesson from this experience and moved all my heavy luggage to the suspension-armed front. Still, everything went well and I didn't have any problems with it during the trip, although the loss of rear brakes was at times noticable when going downhill.

Our plan took us south on route 55, a big bypass road going all the way to the southernmost point of Shikoku, but we wouldn't follow it for long, since it is a very big, boring road, and there's nothing to see at all. We managed to cycle continuously between 20 and 25kph on the long straights, and soon we arrived at our first sightseeing road. It was a small road going not-too-steeply into the mountains along the coast line, and taking us quite deep into the forest. The ride was fantastic. We hardly encountered any people (or cars), and the nature was beautiful to behold. The slopes were not steep at all and we could relax and enjoy the ride. Oh, and my compact camera died on the way. Or so I thought, but after I got home I found out that it was only the battery that died...

On the way we met up with two people doing the famous Shikoku temple walk: a walking course taking you all across Shikoku to visit the 88 most famous temples. This in itself could take a month though, so a lot of people don't do it all at once. The guys we met were on the way to a temple in Hiwasa, which was also our destination. We had a short talk, wished them well, and went on our way again, taking a short break at a nice scenic spot in the forest, where the railway tracks entered a tunnel. We managed to spot a train and then we continued, out of the forest, downhill all the way. We were quite surprised when we arrived downhill and found there the two templewalkers waiting for us! Apparently, when we took a break and were zigzagging downhill, they were walking steadily along and took a straight path down, so they managed to get there sooner than us.

The remainder of our course took us past a nice coastal town, and it wasn't long until we reached our destination: Hiwasa. Hiwasa has exactly two sights: a castle and a temple, and the castle was closed. Of course, we didn't find that out until after we had climbed the steepest hill of the entire trip to get up to the castle's mountain.. The temple was quite interesting, and quite different from the usual temples I've seen in Japan. Still, temples don't really make me excited. After the temple we decided to go to the beach first, about 5 minutes away from the center. We put up our tent while there was still light, dumped our luggage inside and went to the onsen next to the weird temple. And again, the two templewalkers were there! They set quite a nice pace for themselves and managed to make it to the bath house before dark, just like us. We had a quick dinner at one of the local places that didn't close at 7 and then went to bed. It's still quite cold at night...

The following day we got up early and prepared to cycle to the southernmost point: Muroto Misaki, or cape Muroto, if you will. The plan was similar to before: at first we would start on a small scenic road, taking us through the mountains on the coastline, and after that we would switch back to route 55, the big bypass road. Thought at this point route 55 had changed from a big four-lane bypass to a regular two-lane coastal road, and it was the only thing separating the mountains and the ocean. The small scenic road was quite nice, but it had quite a lot of steep slopes in it, and it was quite obviously made for cars and motorcycles, not bicycles. Still, we handled it without too many problems, and we enjoyed some nice views. It's interesting to see how sometimes there is a single farm in the middle of nowhere, or a tiny house in the middle of a mountain. It makes for good pictures, at least.

The scenic road brought us to another tiny coastal village, and we took our time to wander around it a bit, scaring the local children with my gaijin gao (foreigner face) and checking out the local harbor. There's so little people in these towns that they really give the impression of a ghost town. Still, one local restaurant was open, and we enjoyed our unadon setto (cooked eel on rice) very much. After that, we rejoined route 55 for a very long stretch of road taking us as much south as we could before dark.

Thanks to our hard effort at the end of the day we managed to reach Muroto Misaki. Almost. We stopped 2 kms short of it because we found an Onsen hotel on the way, where we took our bath and enjoyed a not-too-terribly-good dinner. Whale curry. Japanese curry mixed with whale meat. Quite strange. Cooked whale doesn't taste very good at all to me.

We tried to look around a bit to find a place to camp, but there was not really any good place around. Only rocky soil, and not even much of that between the mountains and the ocean. We did find a very creepy place that looked like it came right out of an X-Files episode. In the middle of nowhere, as countryside as you can get, we found a huge high-tech bathing and cosmetic care facility. All-white buildings, all-white personnel, very bright white interior, not a speck of dirt to be seen. It looked like a place where clones are made, or where people are brainwashed. I didn't take any pictures, but it really seemed like the kind of place where rich Japanese people go to take care of their body, and then they get brainwashed or replaced by a clone or something. It's the kind of facility that could disappear the next morning and nobody would remember that it was there. Anyway, we asked if we could camp there and they said no. Crap.

The people at the Onsen place recommended us to backtrack a bit to find a camping site, because apparently there was a small park there, and up ahead there were only rocks, rocks and more rocks.. Interestingly enough I met a guy in the public bath who started talking to me, and he was going there as well, on his motorcycle. He went there before us though, and we had to find the way by ourselves. That's not easy! It was completely dark. No street lights, no moon, and only two crappy bicycle lights to light our way. Still, we managed to find the park, and there we found the motorcycle guy and some other people who had already set up their tent. The motorcycle guy was kind enough to light up the area around us, so we could see what we were doing while putting up the tent. Countryside hospitality is great, and fellow travelers always help each other :)