Winter is starting to make itself known here in Atsugi, but it's not quite succeeding yet. One day it's freezing cold, the next day the sun is shining and I can walk outside in just a t-shirt. Autumn and winter are when every important thing happens in my life. Biggest example of this is of course my coming to Japan, but there are numerous other events that happened in winter. For years now I've been stuck in the same cycle, where cool stuff happens in winter, which makes me feel happy for months until the golden week in May, and after that nothing interesting at all happens for the rest of the year. I'm sure it has to do with the yearly pattern enforced upon us by the weather and the fiscal year. In any case, experiencing the onset of yet another winter in the same place makes me think about what I really achieved since I came here. Yup, it's one of those 'Sunday-night-at-2AM-the-brain-can't-stop-working'' topics.

But it's a rather short topic really, because I haven't achieved much at all. On a global level at least. On a personal level I've taught myself a lot of stuff, and I'm very happy to have seen and done so many things during my travels. But all of that will disappear when I die. As for things that I've contributed to this world, or the human race as a whole, there's not much I can be proud of. At my job I've done a lot of stuff related to speech recognition, and I've developed a lot of software that could potentially be useful on the short term, but I wouldn't say that my work is unique or vital to the development of a better speech recognition system. Ultimately it's work that other people either don't need or have already done themselves. Despite that, my work gave me the chance to improve my skills as a programmer, and I'm very proud of that. But that's not exactly 'giving back' to the community.

If I had to list the achievements that I was most proud of in terms of value for others on the long term, then I would probably put this blog and the photos it contains at the top of the list. Which puts things into perspective, because I don't want my single best accomplishment in life to be this blog. It's decidedly un-engineer-y to favor my amateur photographic results over my professional programming knowledge, which is what I use to make a living. I guess in role-playing-game terms I'm like a swordsman who uses magic spells instead of his sword. To continue the analogy, right now I feel like I'm just leveling up my skills to face the end boss at the end of the level.

Back to the point: what have you done that could potentially benefit others? Did you ever make other smile? How? And did you do it my using the same skills you use to earn money? Or was it something else? And if it was something else, do you believe your career path is correct, or would you rather switch? All of these questions make it seem as if I would consider a career in photography, but that's really not true. I think I can contribute more to the world as a programmer than as a photographer, and part of the reason why I think that way is because of all the time that I spent studying and practicing the art of programming over the years. I guess I'm just wondering when I will get a chance to make it pay off as much as photography.

Please don't blame me if this post is incoherent. I am only half conscious. And I don't know which half. 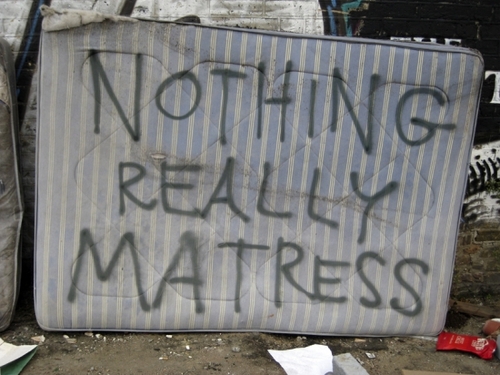