Smeagol will show the way

"Long ways to get yet. Smeagol will show the way." - it's stuck in my head now: whenever I see a road sign I hear Smeagol's voice calling out to me. That's what you get when you put a geek on a bicycle, I guess.

I am here right now: 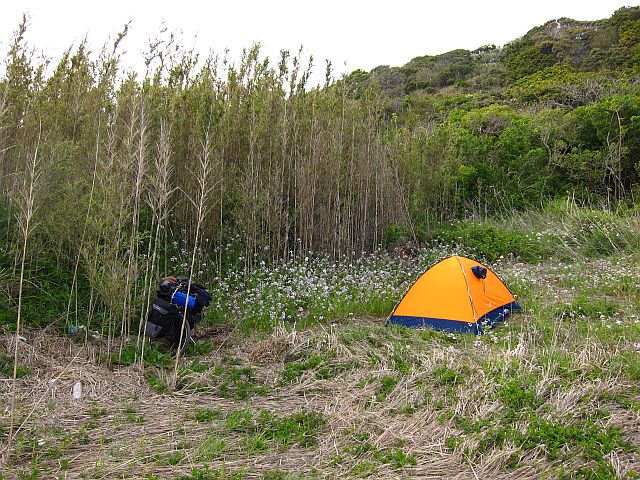 (Wordpress took very long to upload this photo. I've decreased the size but I think the connection here is pretty bad.)

I'm not exactly sure where 'here' is. I'm still on my way to the ferry at the south tip of Nagoya, but I decided to rest early today because of my lack of sleep. I'm at a beach in the middle of nowhere, only a very crappy sandy road leading to here that I couldn't cycle because the sand was too thick. Today was Sunday so there were a lot of people at the beach, but they've all gone home and now I'm the only one left. This time my tent is parked in a wind-free area, with the 'chimney' bit pointed away from the wind direction. Tonight should be warmer than yesterday. Other preparations for tonight include an extra sweater, warm socks and a dry bag to wrap around the bottom bit of my sleeping bag to keep the heat in. There was a toilet building near here, which is why I chose to stay here, but upon closer inspection the toilets are just holes in the ground and there's no running water or electricity.

It's pretty much a worst-case situation. Well, an on-average worst-case situation. No conbini's anywhere near here, no restaurants either, and the nearest vending machine is supposedly on the top of the next hill, although I didn't check. I've got two bottles of water and a food bag with bread, chocolate cream and a bag of peanuts, which made up my dinner. But at least it's not raining!

Sometimes I regret a bit about how I'm doing this trip. I know I've consciously chosen this way (haphazard, random routes, scenic routes etc.), but the consequences are that I'll sometimes be in the middle of nowhere for the night, and it will take longer for me to reach my goal. Also, I think I'm too stubborn. When I find a sleeping place I always want to keep looking for a better one, telling myself that I'll go back if I can't find a better one. But whenever the next place is crappier than the previous one, I don't want to go back. Instead I go further and find an even crappier place. That's how I ended up here, in the middle of nowhere on a road that isn't even meant for bicycles >_<;

Today has been quite uneventful actually. Been following the Pacicifc OCean CYclcecincg Road something or other, which is very challenging and not very useful. There's a national road right next to it that goes straight, whereas the cycling road keeps going up and down into the dunes to the seaside and back, zigzagging, crossing car roads and whatnot. What's worse, at every intersection there's poles in the road to prevent cars from entering the cycling path. The space between those poles is just about my bicycle's width plus one centimeter. This quite annoyed me in the beginning, but later it was quite fun to see how fast I could go between those poles without hitting them. (22kph :D)

Been reading a book called 'The Zahir' by Paulo Coelho. I just started reading it after arriving at this beach camp site. So far it seems quite interesting.

Hopefully tomorrow I'll reach the ferry and make my way into Mie-ken. Should be quite a different scene from today, or at least I hope that, because today was quite boring. The coast line looked way too much like Holland...

Oh, I almost forgot. Had my bicycle's chain assembly looked at in Hamamatsu, but the owner said he couldn't help me. Since yesterday the chain releaser thingie that makes it so that you don't have to pedal when you go downhill flips up sometimes when I stop pedaling. It's not a big deal, but I wonder if one day it may block the chain somehow (and the wheel), causing me to crash in some horrible way. The owner said it was definitely messed up, but he didn't have the parts to fix it. Guess I'll have to get it fixed when I get to Kyoto... The front sprocket could use changing too. Chain still skipping sometimes. Argh.