The path to Sasayama

While preparing my bicycle this morning I ran into my roommate, tough Spanish guy. It turns out his name is David and he is on the way of a very epic journey, crossing many countries like New Zealand, Japan and Thailand. We had a wakeup coffee at the Starbucks before parting ways. Good luck David! 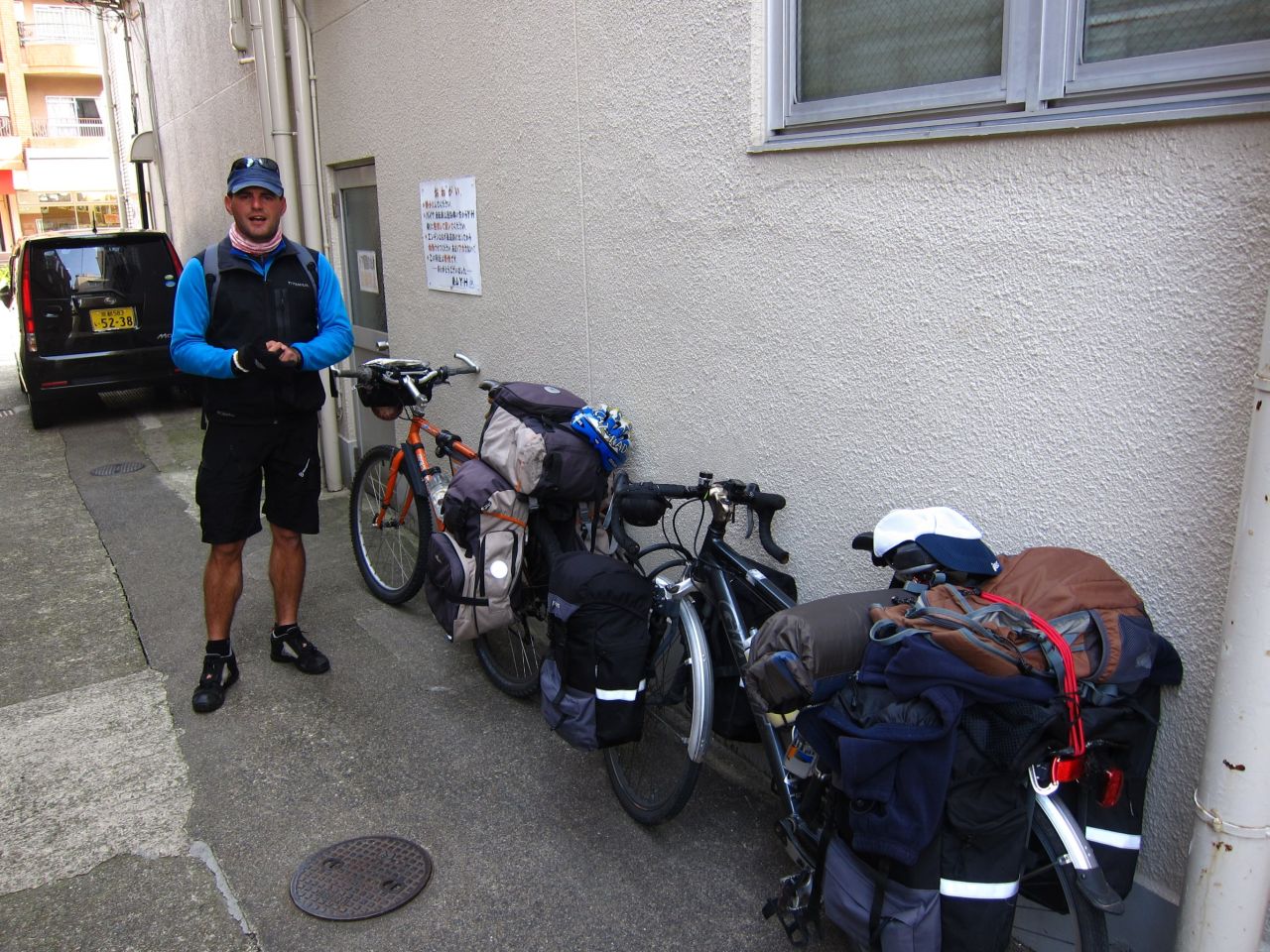 David also started out with tent and camp gear but decided early on to send it back home as he would hop from youth hostel to youth hostel. It seems we both reached the same conclusion. I'm still holding on to my camping gear though. The weather will get better, dammit, because I say so. (That said, today was fairly cold and had light rain at times...) Also, I've discarded some more luggage and managed to put my bright blue bicycle carrying bag inside one of the side bags. I'm losing weight :D

According to Google maps I had about 60 kilometers to travel today, but somehow when I reached my destination it turned out to be 80. I didn't make a lot of detours today, but I did get lost in Kameoka, a city to the west of Kyoto. I had to climb a nasty mountain pass to get there, then coasted all the way to the city not really paying attention. Then I suddenly realized I had probably gotten too far and tried to backtrack in a creative way, accidentally climbing another nasty hill. That ended up nowhere, and when I asked for directions it turns out I wasn't too far yet at all, and I had to continue a bit further on the previous road. Oh well.

My destination today was a place called Sasayama. A single road, road 372, would take me there without any detours. Or without much of anything else either, as it turned out. R372 is absolutely one of the purest roads I have ever cycled in Japan. And by pure I don't mean nature, although there's plenty of nature things to see too (rivers, mountains, GRASS). It was pure because it was classic Japan the way it's supposed to be. A road slaloming between hills, occasionally passing by a small village hidden between the mountains, sometimes climbing a bit and passing through a pine forest or bamboo forest, and then going down again to the next hidden village. There is absolutely nothing to spoil the experience: no foreigners, almost no traffic, no vending machines, no convenience stores and no restaurants. Small villages don't need restaurants or convenience stores, they have a tiny grocery store and nothing else. There's no traffic because nobody goes there, and I barely saw anybody even walking outside. No idea where all the people went, but it was a very peaceful ride. Well, until I got hungry, that is. The only restaurants that I found on the way were closed, so I had lunch at the only conbini on R372, next to a giant huge tree. Not bad.

Here's some pictures of the road. The photos themselves are nothing special, and I will be the first to admit that from a photographic standpoint they suck. But imagine cycling in this area and you will realize how awesome this road is. 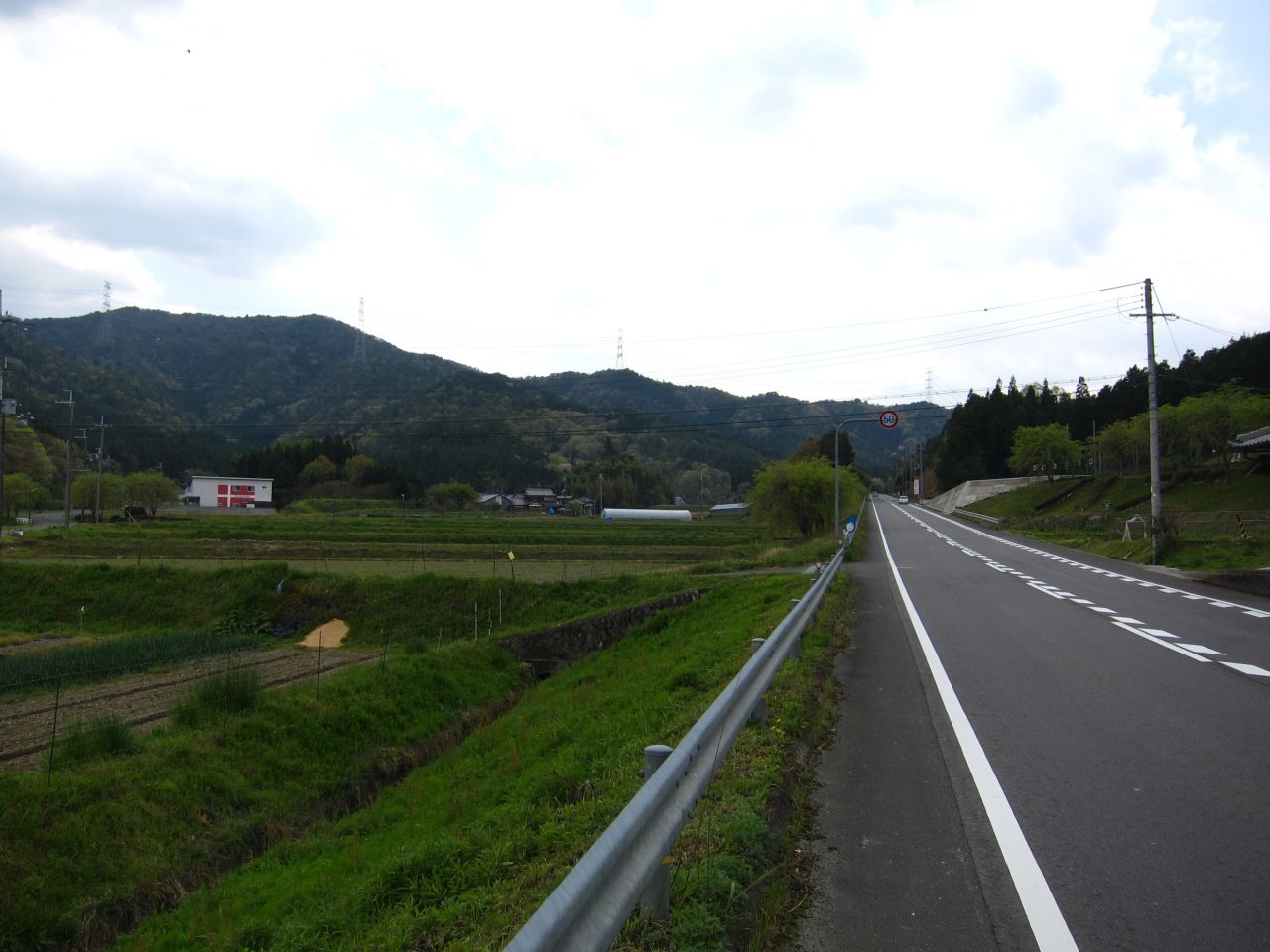 It was a bit cloudy today

And a bit hilly 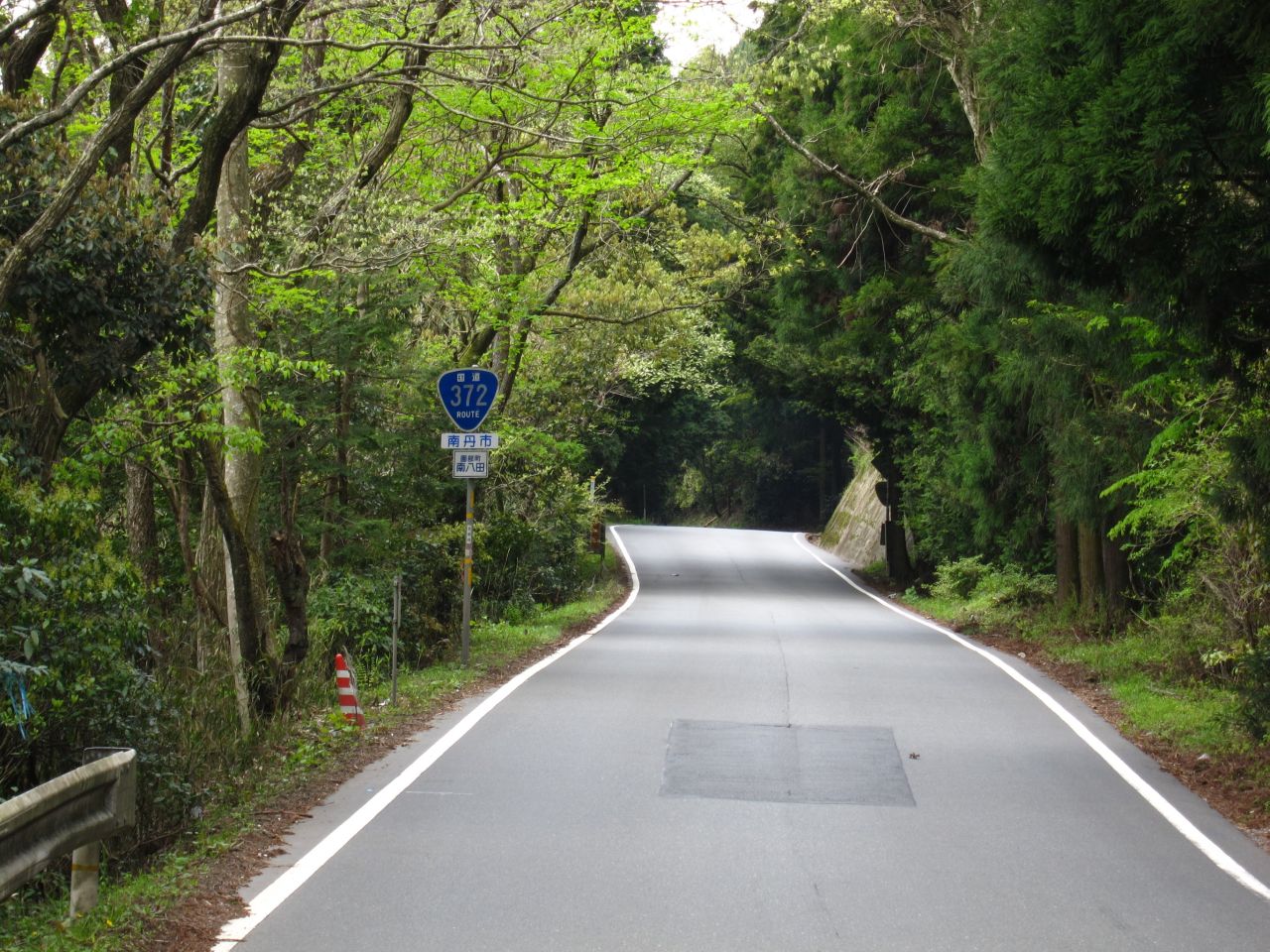 And a bit foresty 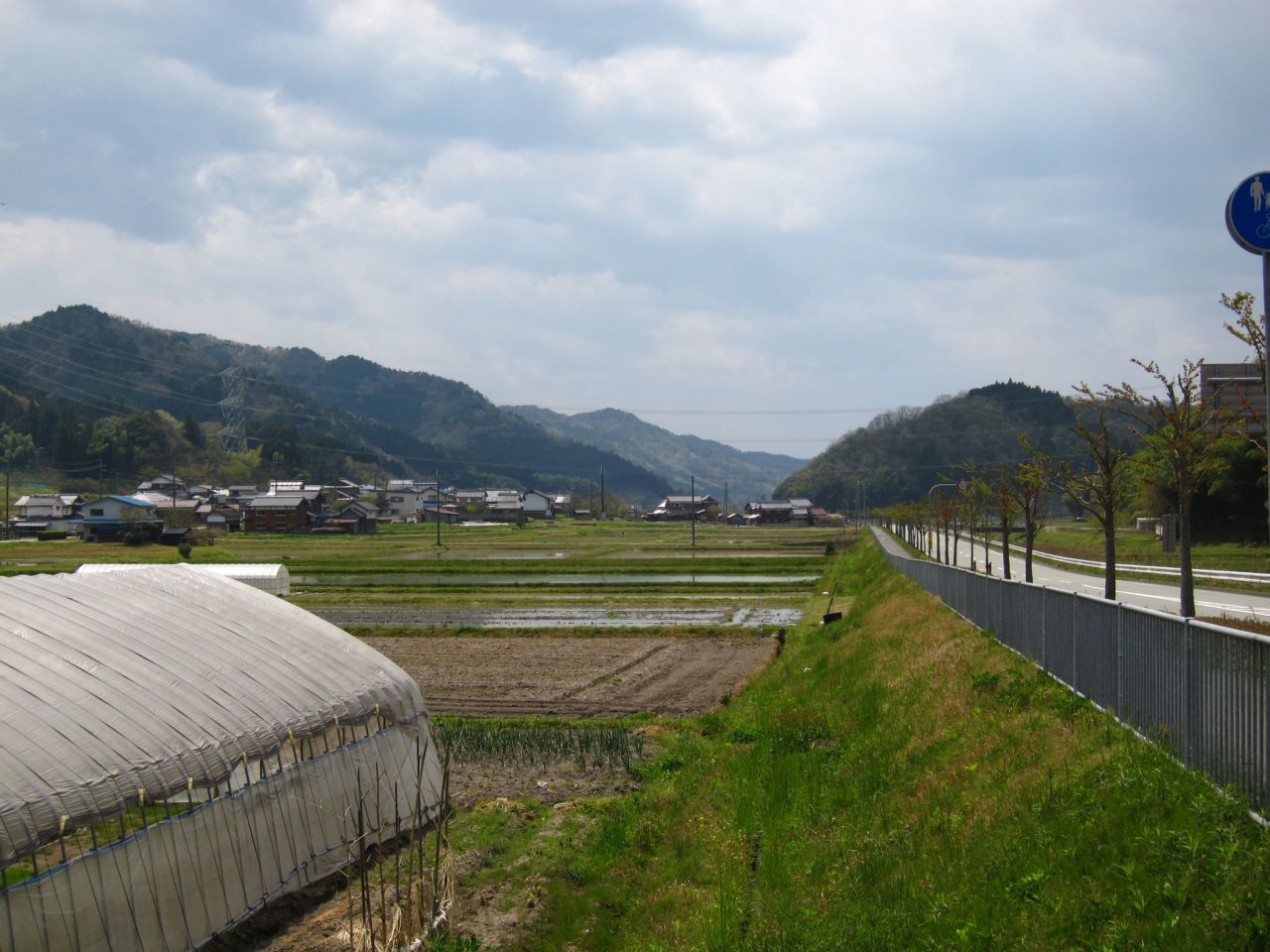 A wide road, no traffic, and nice scenery. Perfect. 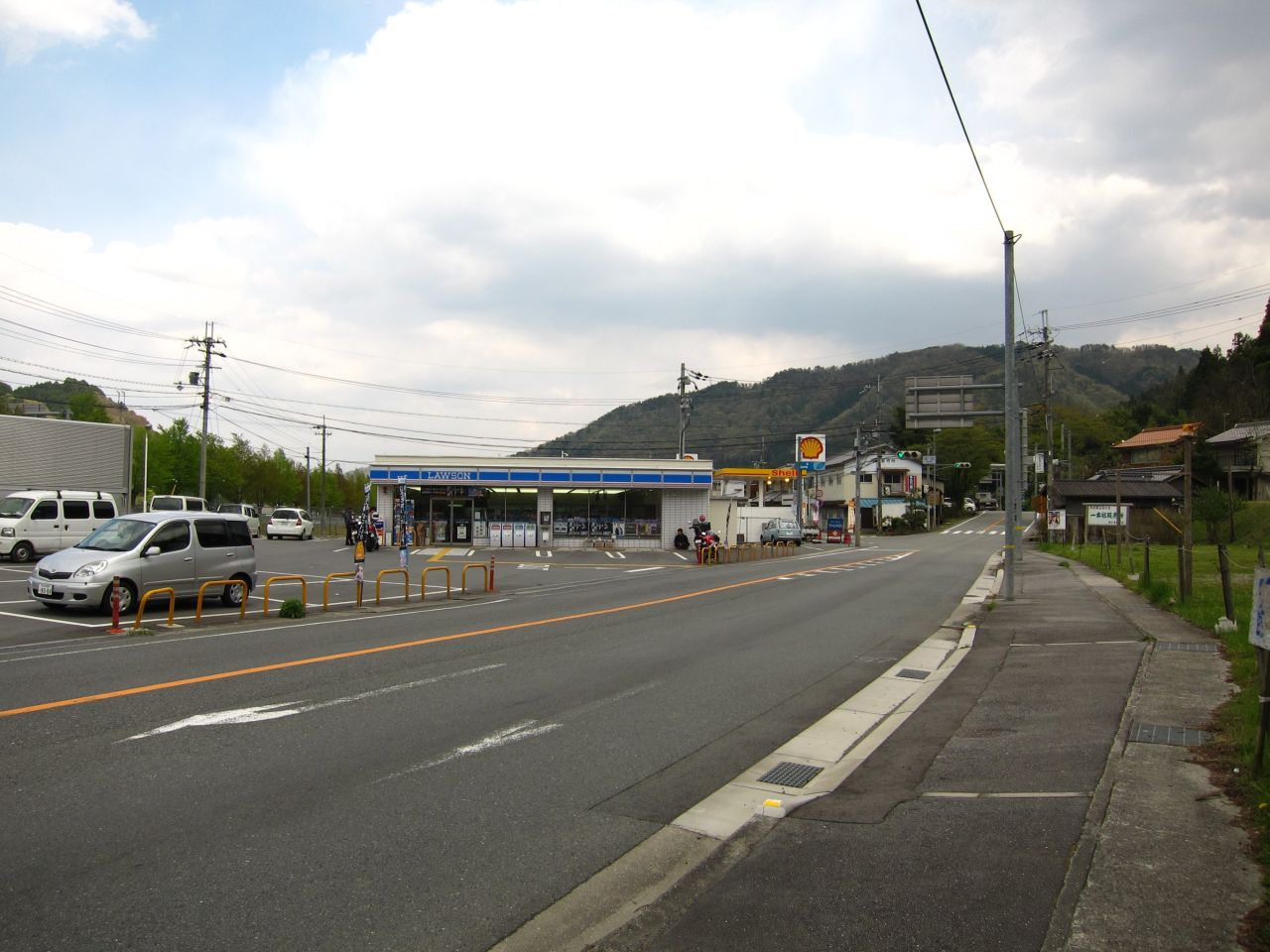 The only convenience store on the way

I keep on climbing hills that are way too steep for my comfort zone. I start to climb them optimistically in a high gear and then change gears lower and lower until either I reach the top of the hill or run out of steam. I'm trying as much as possible to keep my front gear in the highest gear at all times, partly because it's a nice challenge, and partly because it's near impossible to switch back to a higher gear after lowering it. It even got worse after the last bike repair guy 'improved' it. There's just no fixing the gears on this bike...

I'm getting stronger though. I still run out of steam fairly quickly, but when I started my trip that meant that I had to stop at the roadside and wait for my heart rate to go down again to an acceptable level. Right now I'm running out of steam while still in middle gear at the front, and instead of stopping to catch my breath I cycle up the hill slower and can still catch my breath. It's a great feeling to be able to do something that would be impossible for me just one month ago, and this motivates me to try even harder.

Posted in Spirit of Japan , Uncategorized