First, here's a backlog item: the GPS log of a couple days ago on everytrail when I cycled towards Okayama. I got lost after following a cycling path, and that's when I turned on my GPS. I've just seen the log today myself, and it turns out my detour wasn't that great. It also shows the rather boring urban part of the trip.

I'm having trouble getting out of bed in the morning! The youth hostel bed is the perfect softness for me and I just want to lie in bed for the whole day. I'm quite used to getting up early though, and by 8AM I'm usually bored with sleeping already and want to get out and do something. Today I did the usual: went to a conbini, bought breakfast and went to a riverside to eat. Right after finishing breakfast it started to rain.. As I got on my bicycle again I wandered across another bicycle shop and asked if I could borrow a pump to fill up my rear tire to the maximum. Still worried that a lot of air escaped since my puncture two days ago I was ready to pump it up a lot, but as it turned out it was still completely full! Looks like my quickfix worked. The sticky foam spray super puncture fixing stuff is awesome.

Today I went to the Peace Memorial Museum. I'm not much of a museum person, but this museum was an experience that I will not soon forget. I was very impressed. A friend suggested me that this museum is worth seeing twice, something I dismissed immediately before visiting there myself, but now I completely agree with him. This is a must-see place that you have to visit at least once in your life. Rather than the Nagasaki museum, which focuses more on the icky disgusting effects of the bomb, this museum tells you a story and makes you feel as if you were really there, experiencing it firsthand. I want to share more details here, but I think it would be better to go there yourself and see it with your own eyes. 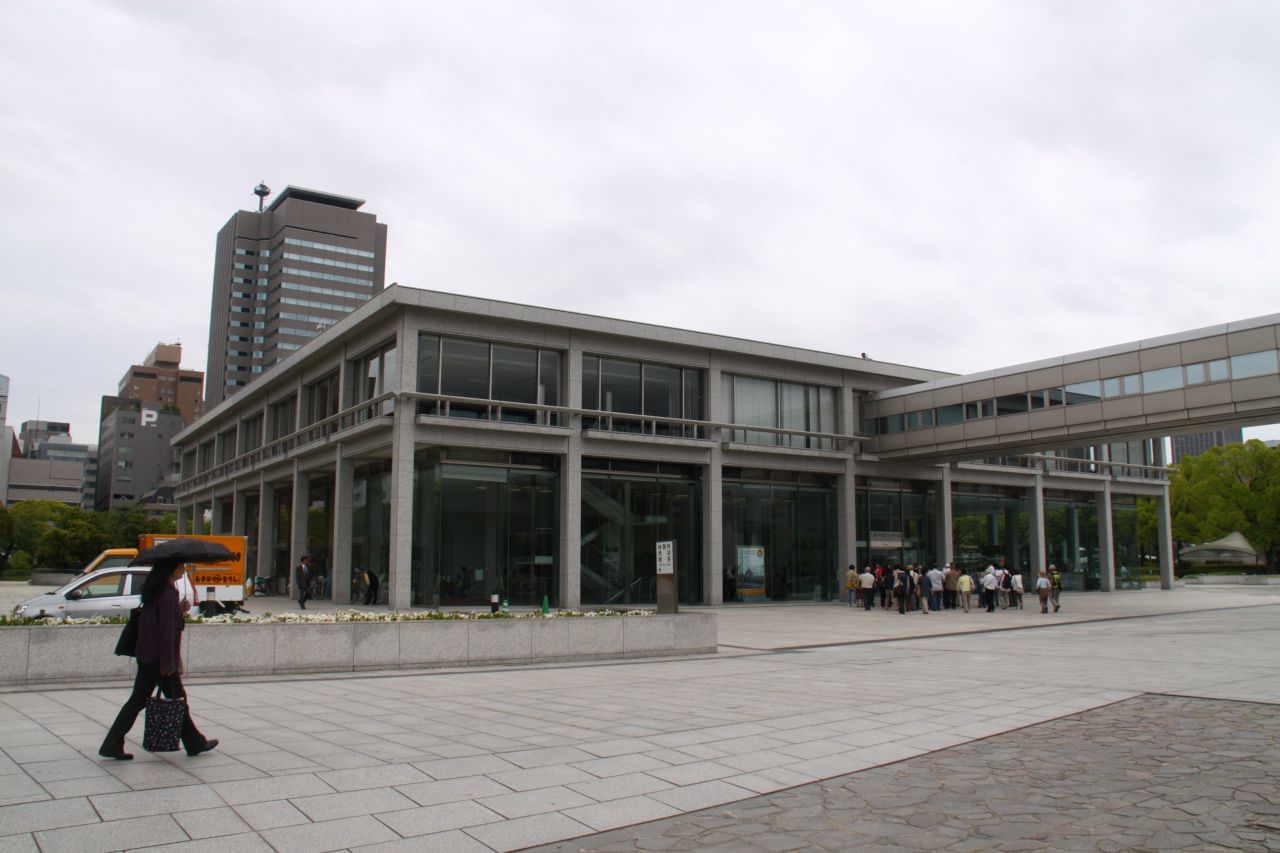 Entrance to the museum 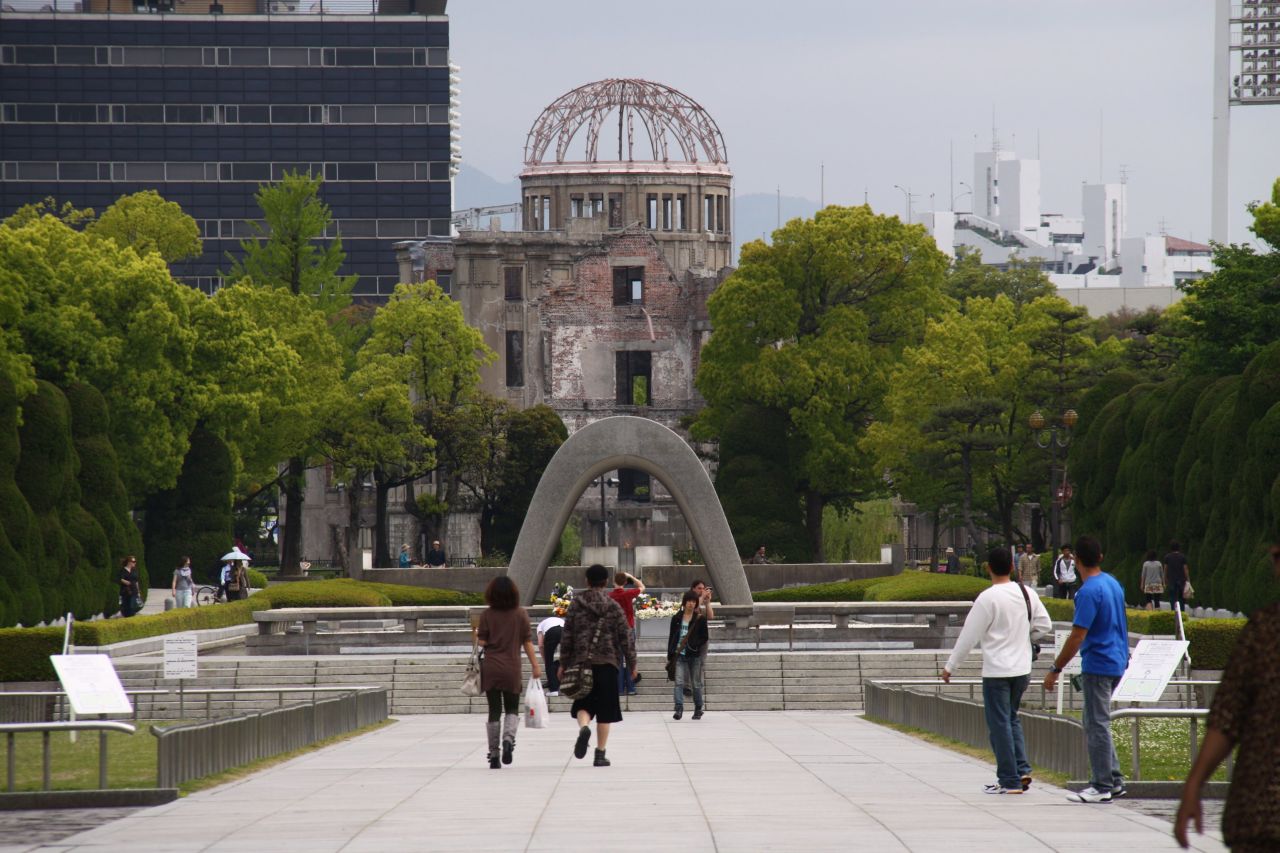 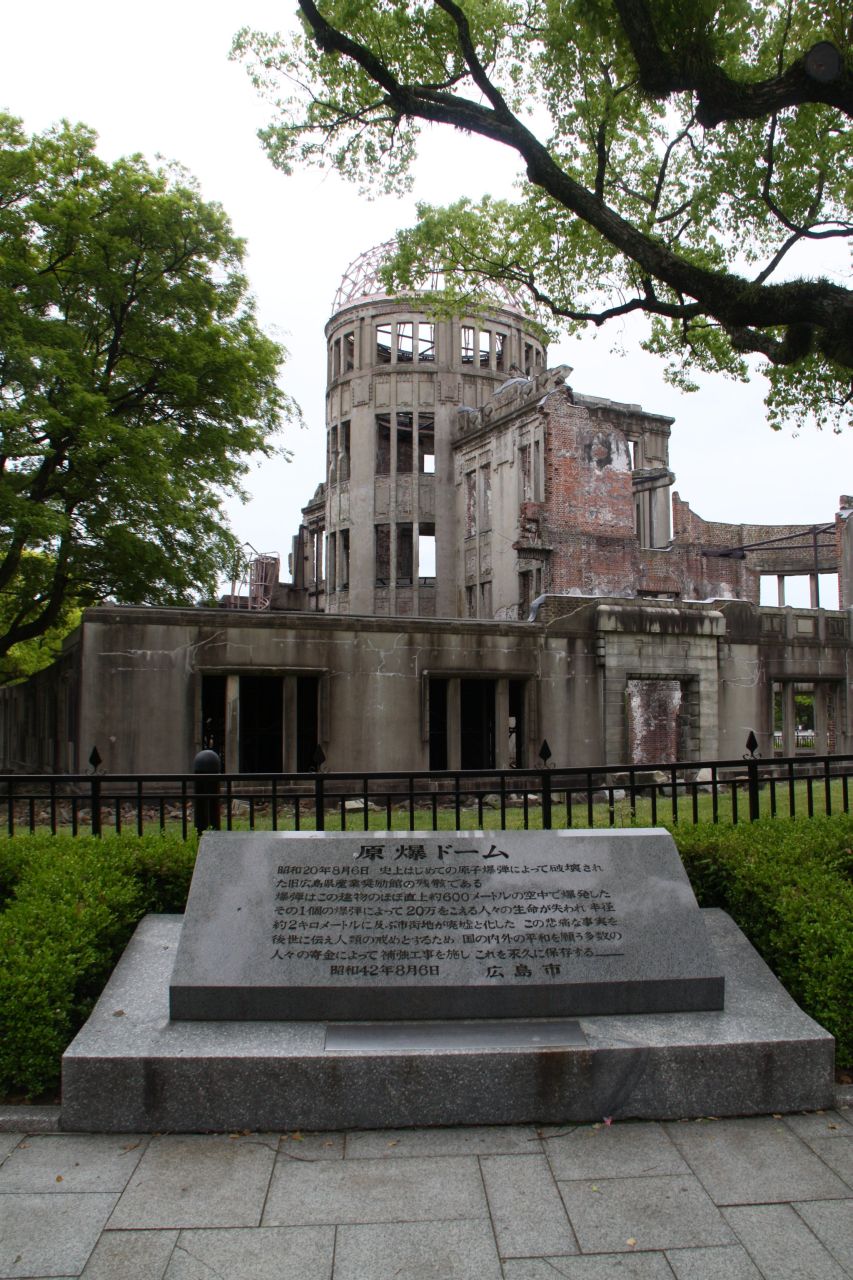 Another one of the a-bomb dome 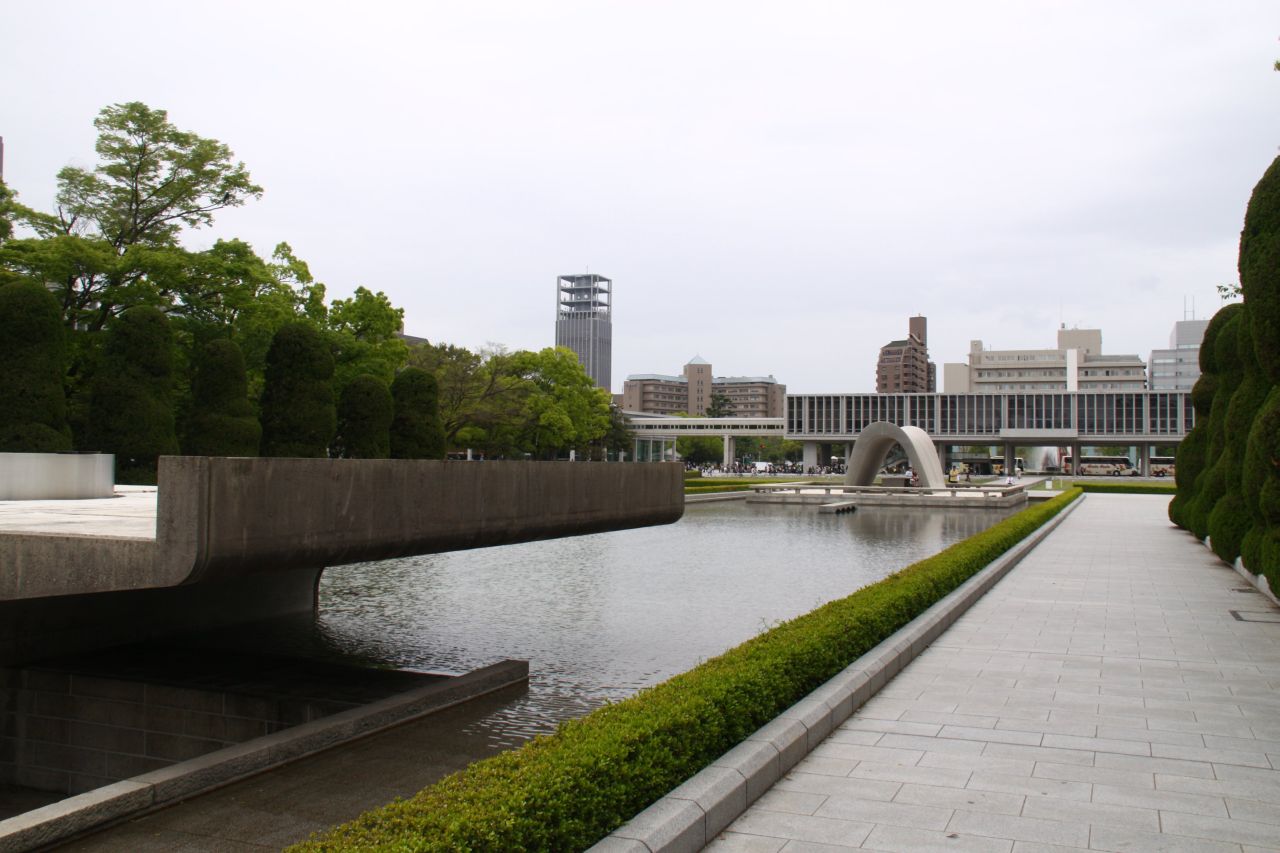 The museum from afar

After the museum I took a break and walked around the area a bit, which was now pleasantly quiet after the stupid festival was over. Unfortunately the weather was lousy for taking photos, so I moved on towards the city center with a mission: to find a kebab restaurant. Earlier this morning a friend talked to me about kebabs and instilled an insatiable desire in me. I found this place online, put some photos of the google map on my digital camera and set off to find it, which turned out to be quite easy. As a foreigner in Japan it's not always easy to find kebab! Which is a real shame because I'm quite used to eating kebab in the Netherlands, and it's one of the foods I really miss here in Japan.  I can highly recommend Molly's Med Cafe. The food is awesome and it's a great place to relax. They also sell beer by the bucket, but I passed on that as it was still early in the afternoon. 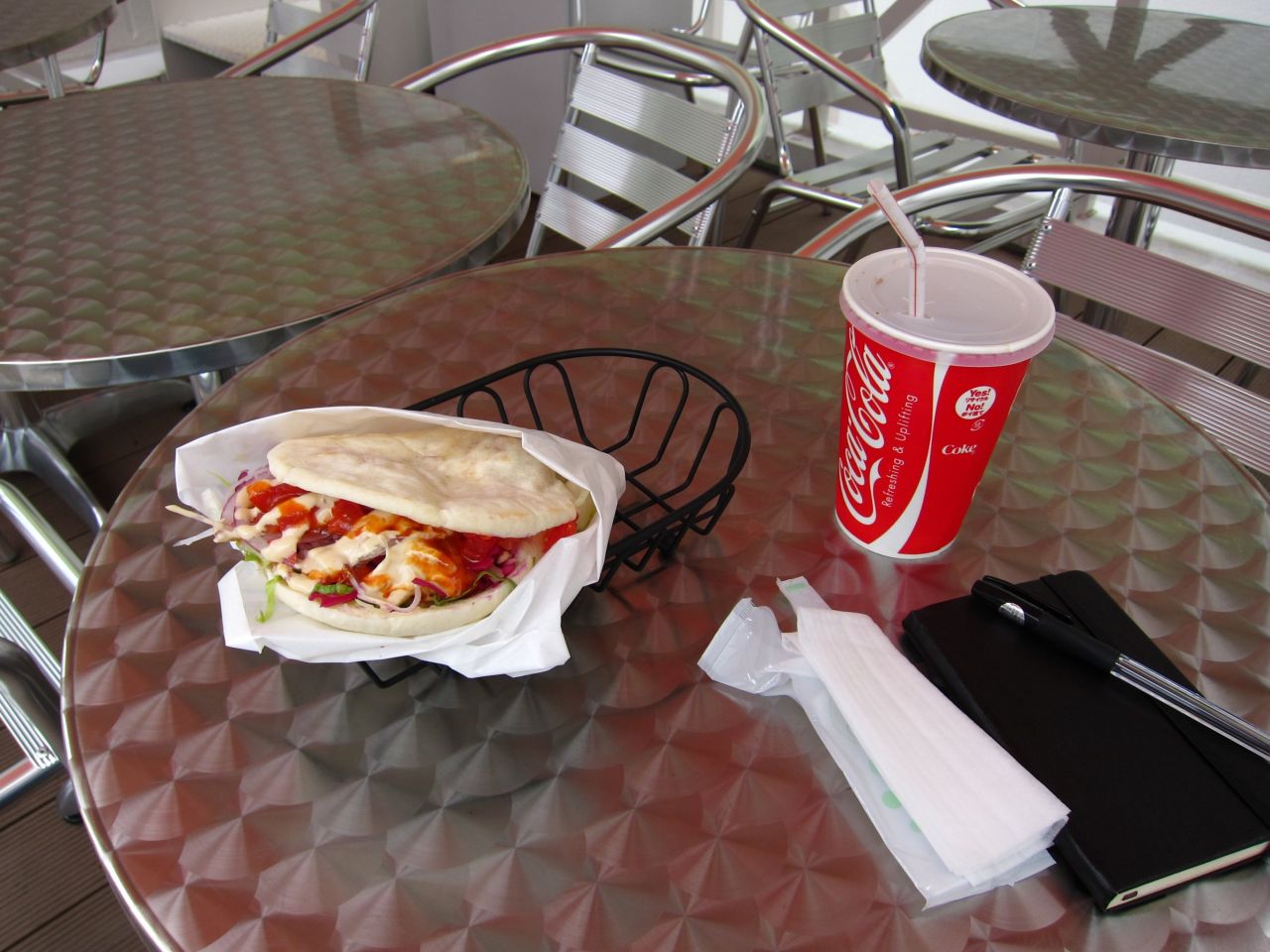 MY KINGDOM FOR KEBAB

As for my general impression of Hiroshima, I get the feeling that everything's a bit more chaotic here than elsewhere in Japan. People walk at random places, there's always a near-accident going on around you and there's a general sense of confusion and lack of sense in the road layout. There's always people cutting across or walking where they're not supposed to walk (or cycling where they're not supposed to cycle >_<;) It's very different from Kyoto, which had perhaps more people walking around on the streets, but somehow everyone managed to avoid each other and things seemed to make sense. What's worse, if you cycle on the sidewalk then Hiroshima is definitely the worst possible city to be in.  If you want to cross a road you first have to go back a bit, zig-zag down a ramp to get underground, get to the other side of the crossing and then zigzag your way back up. At some places there is no underground crossing but you have to climb up a bridge, which is double the amount of zigzags. Not very funny, especially if you're carrying luggage. I gave up on doing it the proper way and just cycled on the road all the time. In the general chaos of Hiroshima traffic nobody seemed to notice or care. (Note that I call Hiroshima traffic chaotic, but this is of course by Japanese standards. There's a lot worse places in other countries.)

I'm going to do a bit of packing today and I have to figure out roughly which way I'm supposed to go tomorrow. I didn't get a map for the last bit of mainland, so I'm relying on my compass until I get to Kyushu. I'm not in a hurry now that the temperature's gone up, but I'm also expecting a bit of rain for the next couple of days, so it might not be the best time to camp. I'm sure things will fall into place with a little bit of traveler's magic, though.