I had to struggle a bit to get a happy end today, although mostly the struggle was with my own stubbornness.

Woke up this morning freezing cold, as I mentioned in the last post. I can tell you by the way that an 'abandoned' camp site in the middle of nowhere gets darn creepy at night. There were no lights on anywhere, and the wooden fences kept on making noises all through the night that sounded like sticks breaking in half. It's good that I found out soon that the fences were making the noise, otherwise I would've had trouble sleeping. Well, more trouble than just sleeping in the awful cold. 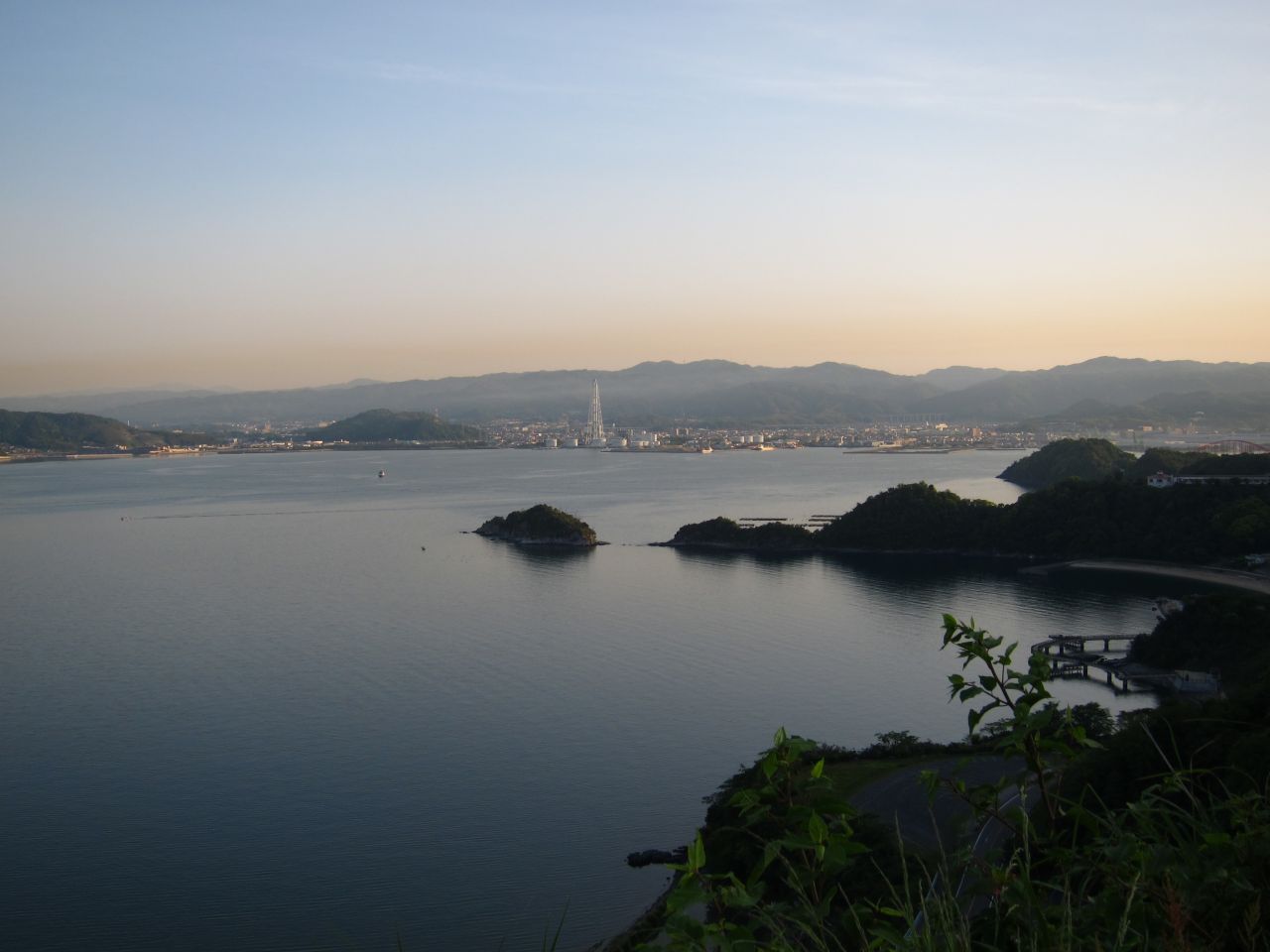 I started cycling when I got a call from Panakuro-san, who wanted to cycle together with me for a bit and show me around. I accepted and we rode together until lunch time, taking all the nice shortcuts and avoiding the big roads. It was a great ride and at a nice pace. After a well-deserved sushi lunch I rode on by myself. We already did 70 km's before lunch and I no longer felt compelled to drive quickly. Instead, I found a seaside road and followed it all the way round, as this is sort of a peninsula. My direction changed from west to south to west again and then north, and sometimes I lost track of the sea because of all the heavy industry around here. Still, it was a relaxing ride. The first half was hilly but nothing too heavy, and the second half was a very very long stretch of wide open road that made me feel as if I was in Australia. Thank you Panorama-san for showing me around! 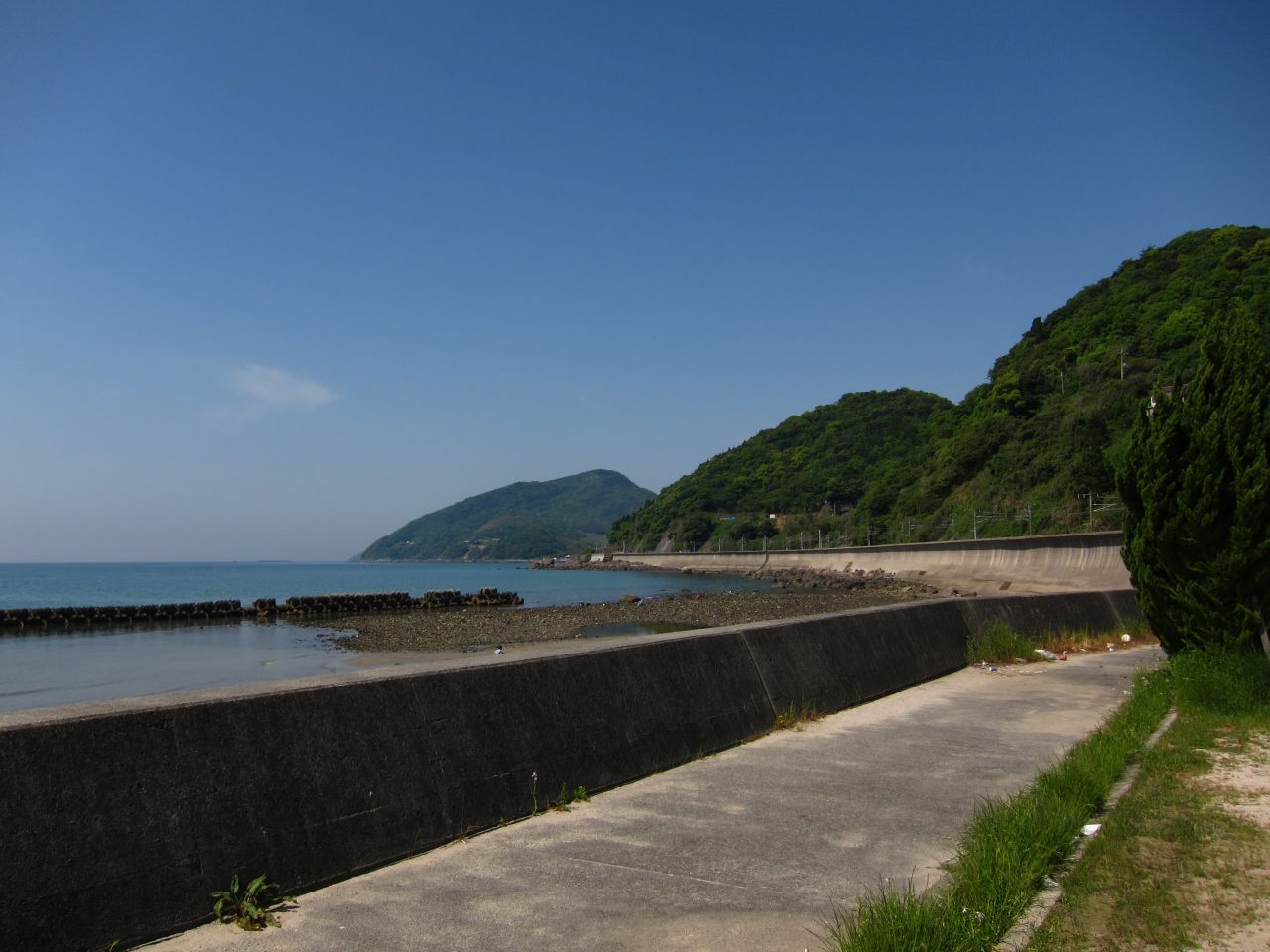 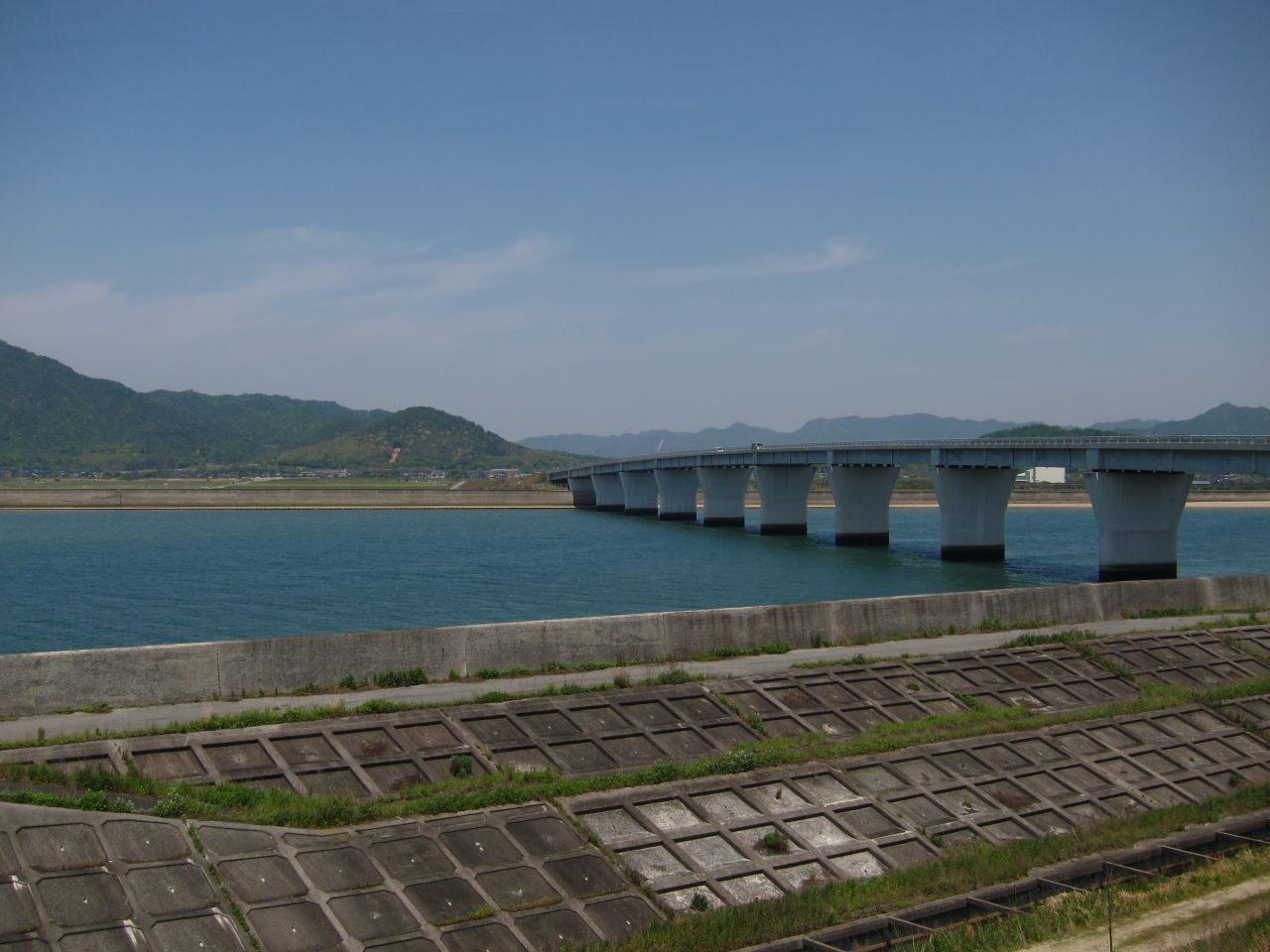 Yamaguchi prefecture is a rather different place. I really like the people here. They don't talk with a strange accent and they're all very friendly. I remember back in Hiroshima (prefecture) where everyone talked gibberish, was generally slightly more rude and traffic was chaos. Here is the complete opposite: I understand everyone, they're all nice to me and there is no traffic at all! It's almost creepy how empty this prefecture is. Huge six-lane roads in a lot of places, yet no cars that drive them. Almost no pedestrians either. Like a ghost town.

By the time I reached 80-90 km's on my daily distance counter I decided it was time to look for a campsite.  I found one barely acceptable place at the beach but decided to drive on, thinking there'll be another place at the coast. For the next 20 kilometers I was then not able to even get close to the coast because of all the huge factories that were taking up all the seaside area. It reminds me a bit of Holland actually; big roads, not a lot of traffic, lots of industry, and very flat, open areas. So nostalgic.

Finally I reached another beach area that looked exactly like the place I was rejected from before coming to Hiroshima: nice beach area, trees, grass, and a fancy restaurant in the middle. Remembering my previous experience I decided to cycle up a nasty hill to get to an 'official' camping site, but staying there for one night would cost me 2000 yen. No thanks. I asked a random person if there was any other place to camp cheaper, and she told me to just cycle up the hill a bit further and there'd be a parking/lookout area with toilets where I could camp for free. Nice!

Thinking I'd do that later I cycled down a bit, found another suitable campsite, and then cycled onward a bit to find a place to eat. That turned out to be impossible. I asked three different people if there was any restaurant or cafe around, and they all told me that the only place is the fancy restaurant at the beach. Damn. This is really countryside. Too tired/annoyed to keep searching I bought food at the convenience store and headed back to the beach to eat. From there it'd be a 10 minutes ride to the campsite. On the way back to the beach I realized that I'd somehow made a full circle and ended up 5 kilometers back where I came from.. 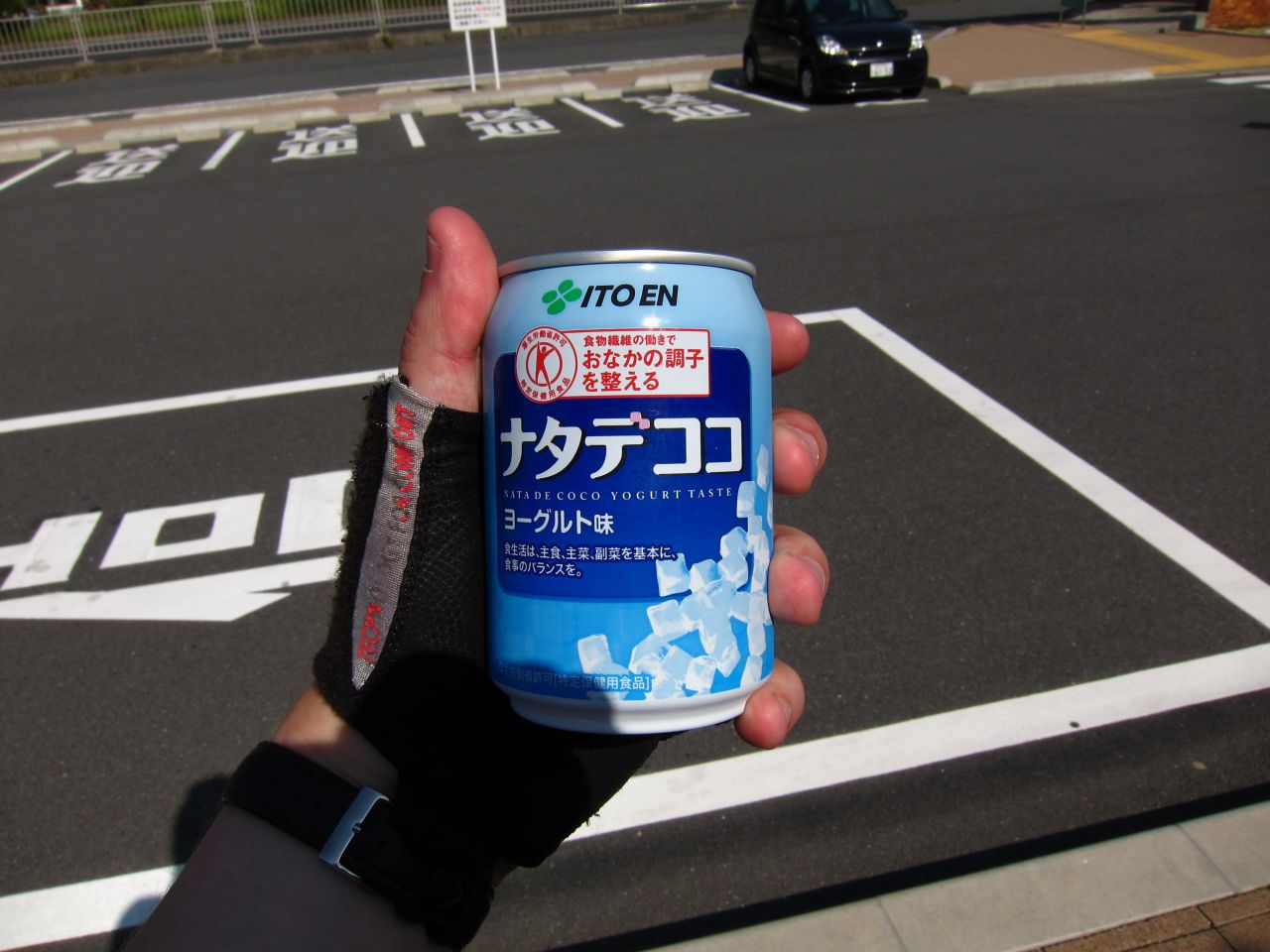 Today's weird drink: Nata de Coco: a drink that looks and tastes like yoghurtsperm and has tiny squishy solid jelly-like cubes inside that you have to chew to eat. Despite the strange description this is one of my favorite drinks in Japan, and I'm glad I came across a vending machine that sold it. 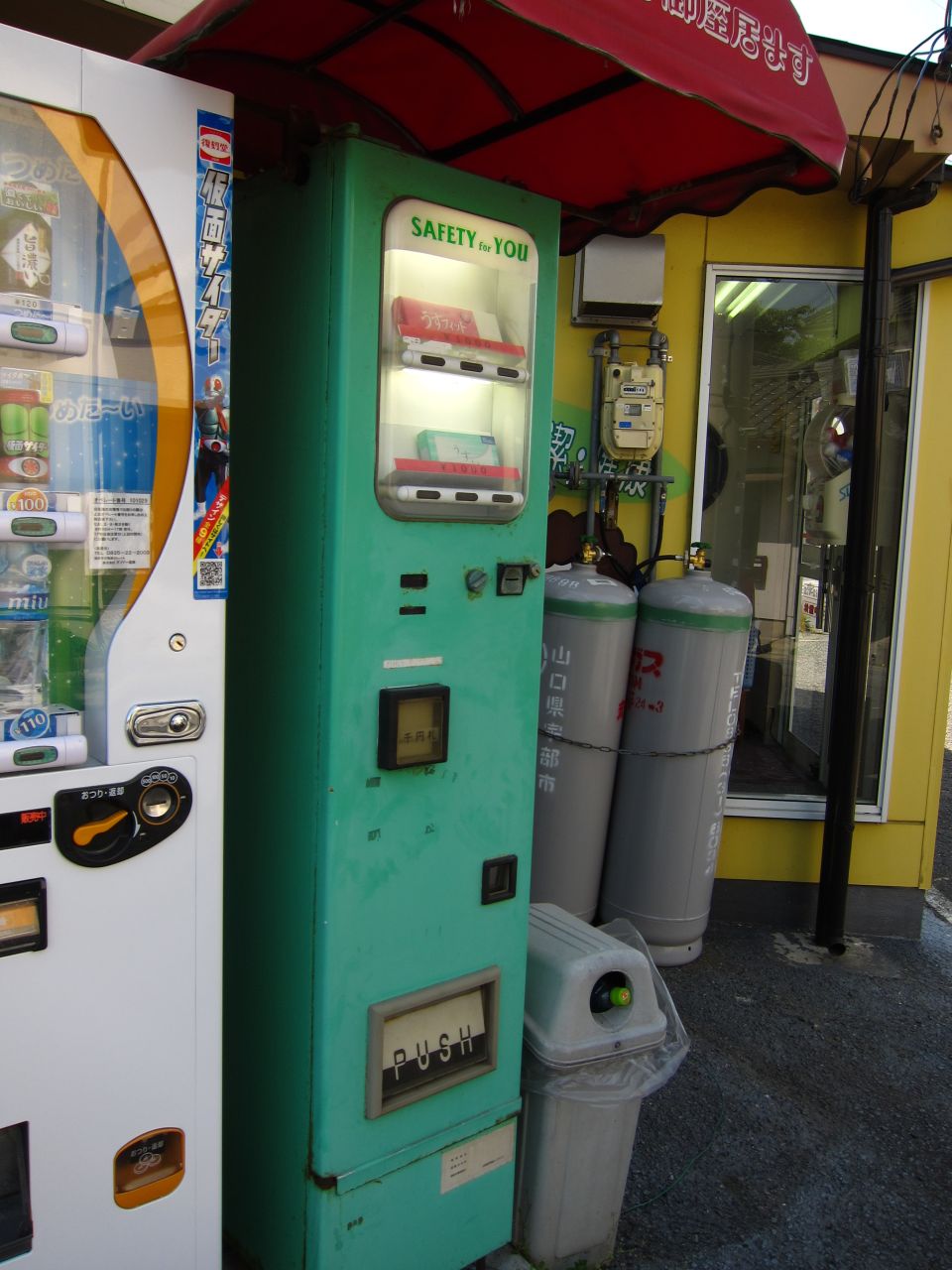 Speaking of vending machines, I came across this one today: a condom vending machine. First time I've ever seen one in Japan. Two strange points about this vending machine: 1. it looks like it was made 50 years ago, and 2. it was located in the middle of nowhere, the nearest city was at least 5 km's away. Peculiar. One pack costs 1000 yen by the way.

Arriving at the beach I decided to ask at the fancy restaurant if it was ok to camp at the beach area. The worst thing that could happen is that they reject me, but I already found another camp site, so that would be no problem. I made a point of parking my bicycle at a place where the person I asked the question to could see it, but there was no need to bother, as all people in Yamaguchi are nice. He told me that it was perfectly okay to camp here, and then he asked me what I was planning to do about bath/shower, and told me there was a public bath very close to here that was very cheap and nice. Excellent! Yamaguchi-ken is great. 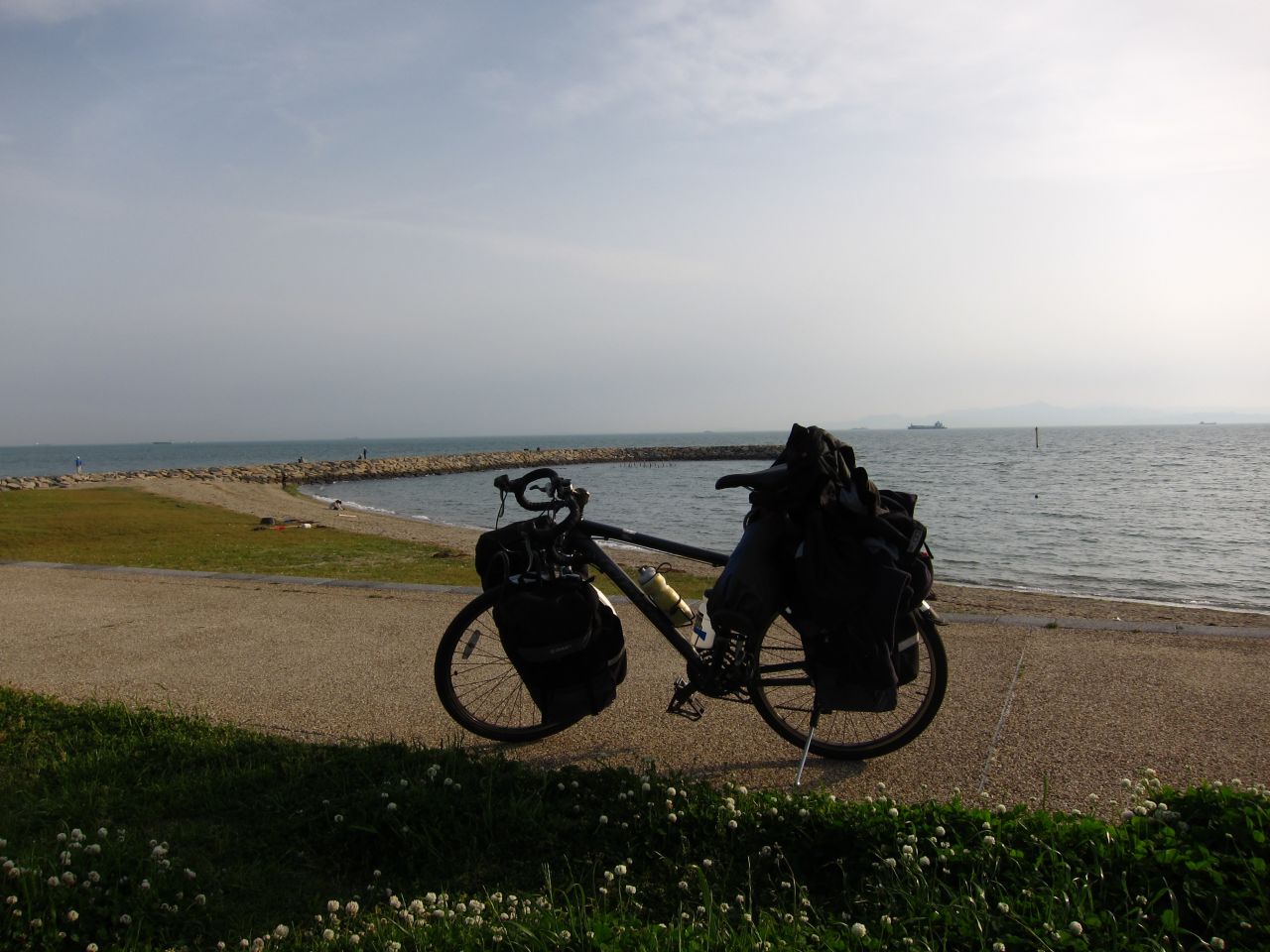 So, sleeping spot secured, dinner secured, bath secured. All ready! Tomorrow I have about 40 kilometers to go until I reach a city called Shimonoseki, which is the crossover point to Kyushu. Kyushu! I'm almost there :D 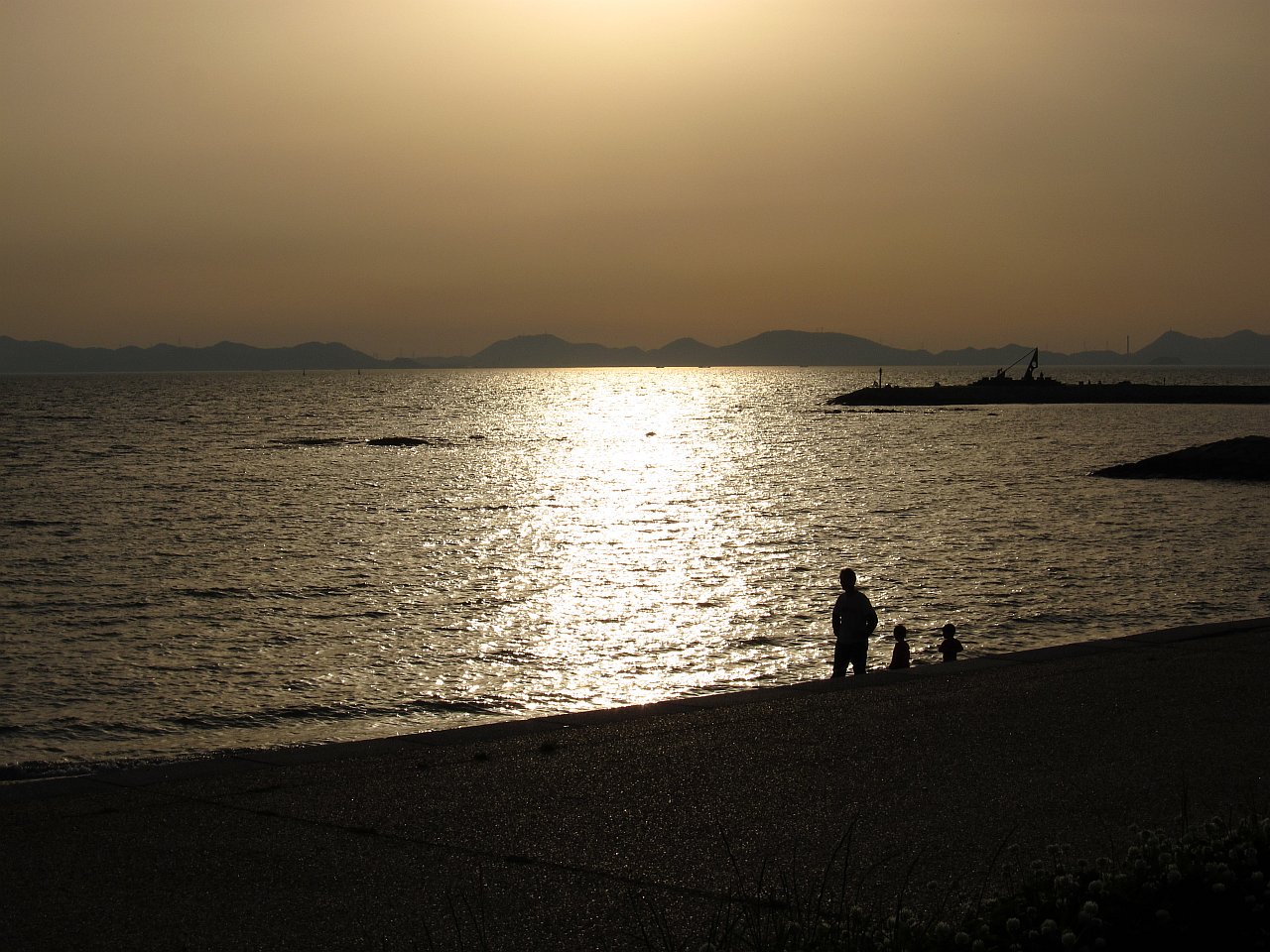 (of course, it will still take me at least two weeks to get the southernmost point...)

I did say that I didn't want to cycle back to Tokyo or even Hokkaido, but I really am  in the right rhythm right now, and I'd feel sorry if I had to give up my current lifestyle for something else. Maybe I can make this trip longer somehow. Hmm...