On some days it's just better to stay in bed. I would have, but around 4AM, even before sunset, I heard old ladies talking outside. When I finally decided to wake up at 6AM I noticed that they were cleaning the area, as the beach I was staying at was also a 'community center'. When Japanese people get old they wake up at 4AM and start cleaning random places. Useful functionality. The day started brightly, both in spirit and in shutter time, but then quickly turned sour. 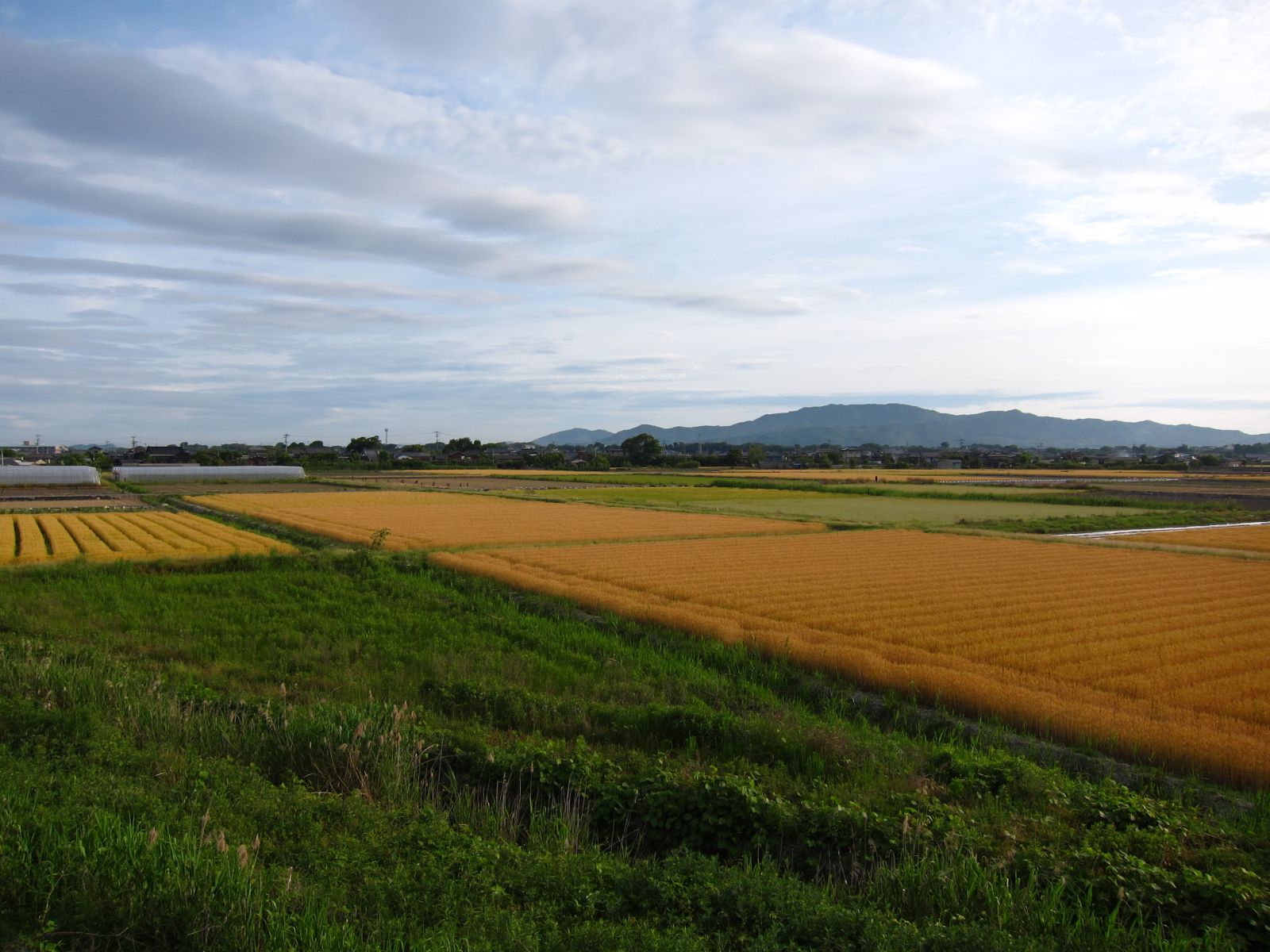 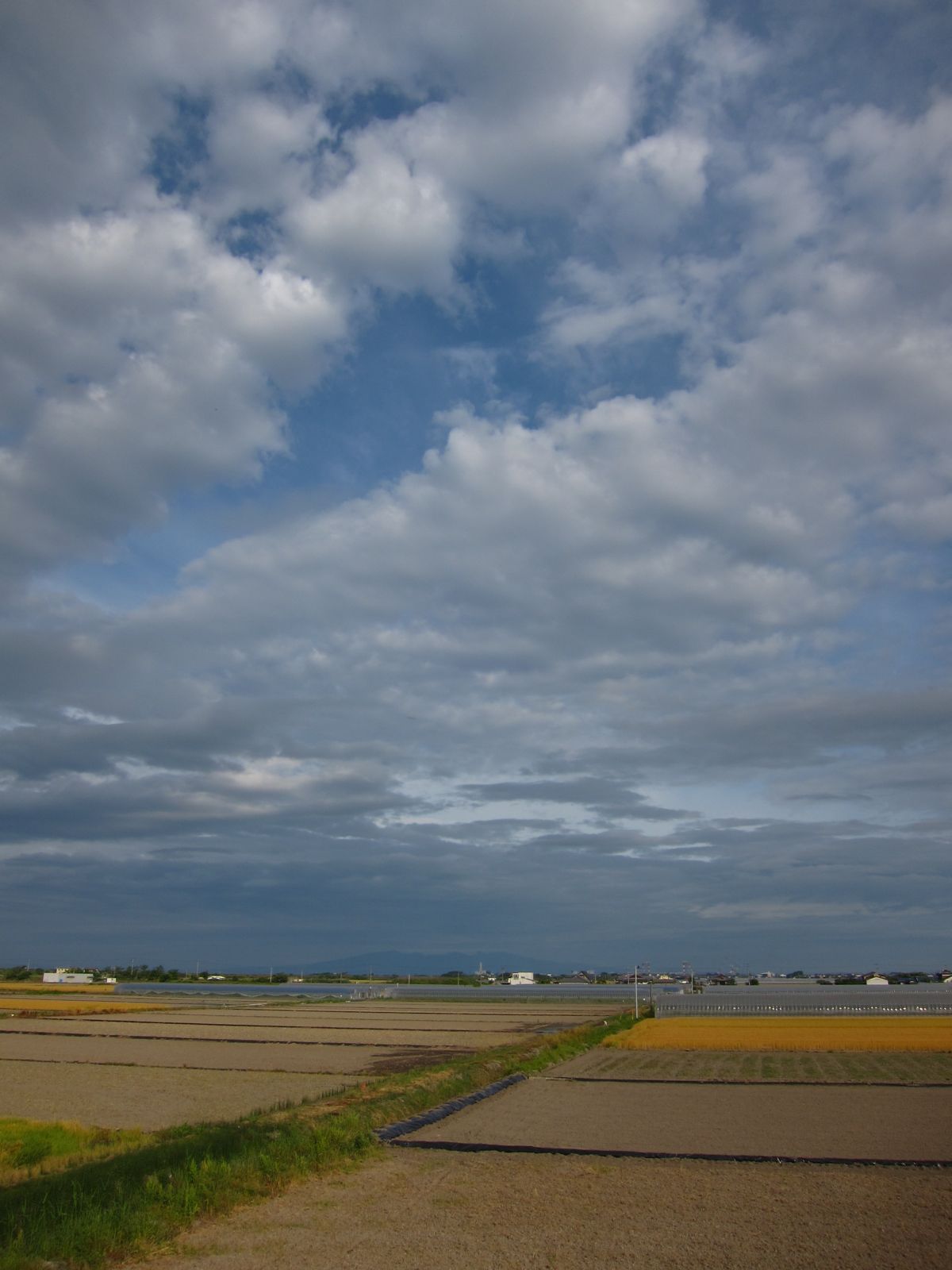 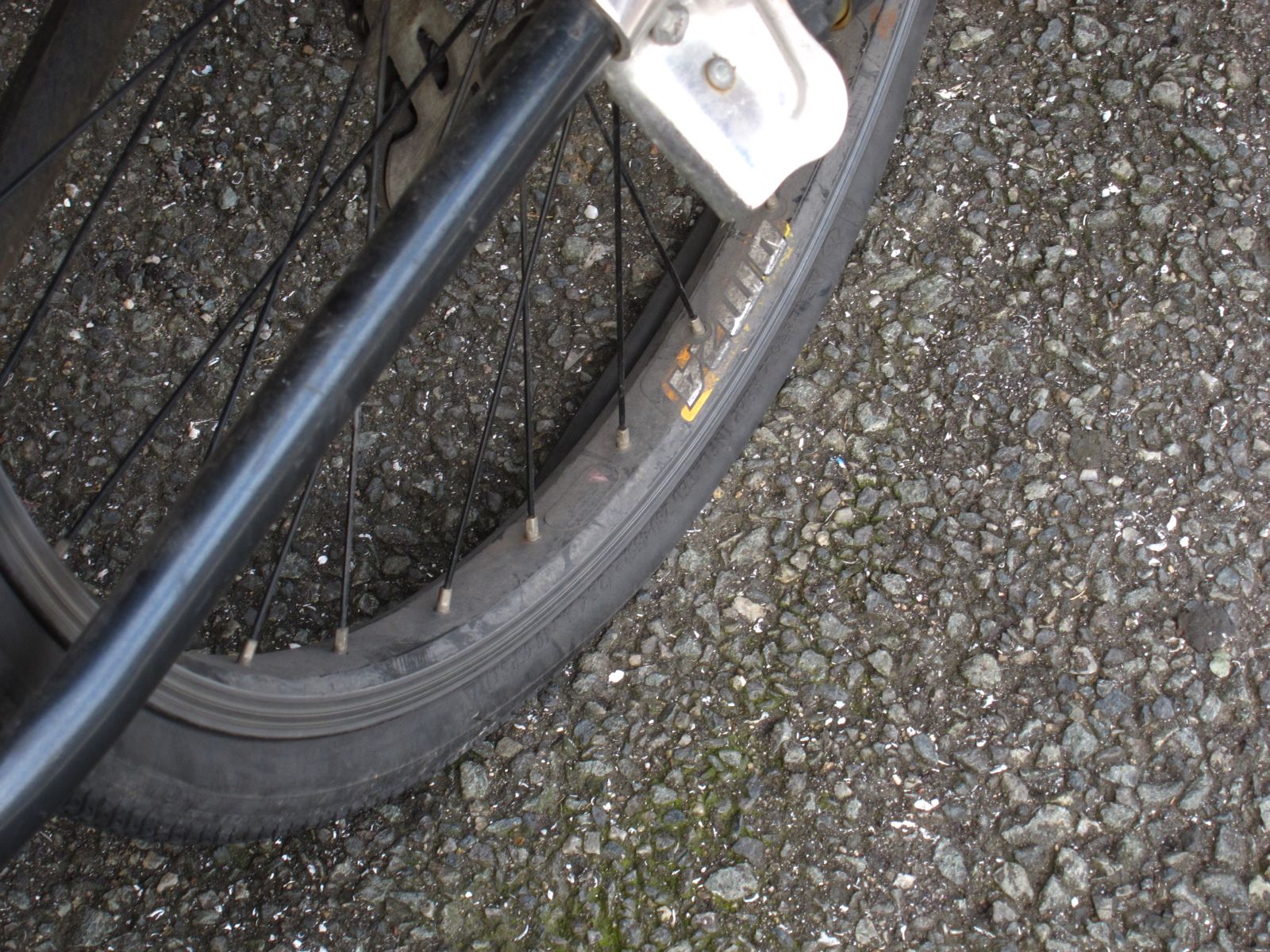 I took this picture as I was taking a conbini break to eat breakfast, about 5 km's after I left. I'm absolutely sure that the tire was fine when I woke up, so I must have punctured it during the first half hour of cycling. Now that's a good start of the day.. I quickly spotted a piece of glass in the outer tire and removed it. Then I tried the magic glue leak fixing spray can again, but no luck this time. 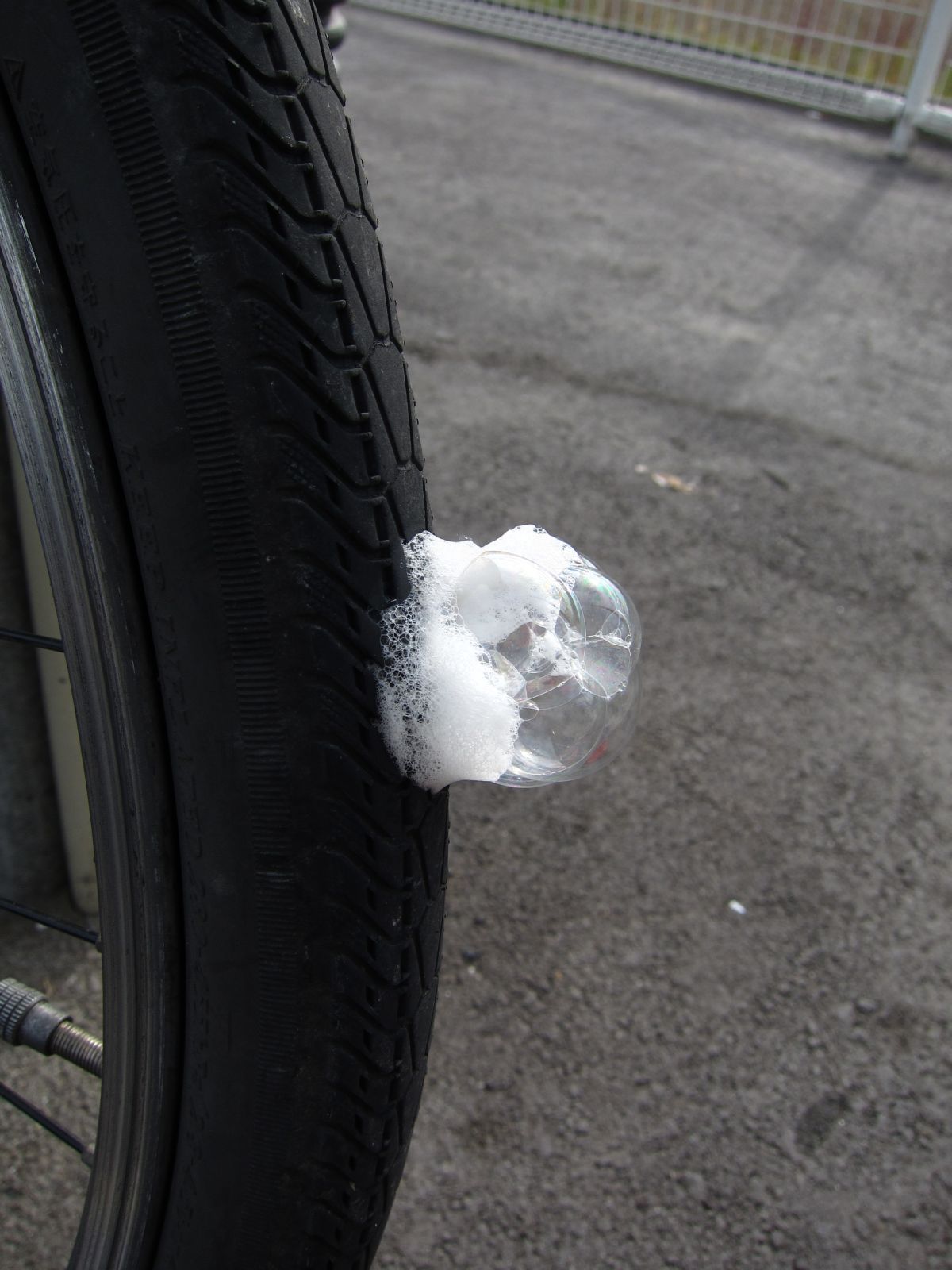 It did make it easy to find the leak, though. Having never fixed a flat tire before, I didn't really know how to start. Somehow I managed to use a 100-yen (~1$) tire fixing kit to get the inner tube away from the wheel. I decided not to fix the leak, but replace the inner tire with the spare one that I was still carrying around since the start of the trip. Finally the spare parts are coming in handy. First inner tire replacement: successful! :D I used the little foot pump to pump up the tire and made it really really hard. In my mind I always thought of the tiny foot pump as a piece of crap, but I have reconsidered my opinion: it works perfectly, and if you give it a little effort it can blow up the tire if you want to. Not that I did that, of course. It turned out to be a very long breakfast break, so I quickly got underway again. 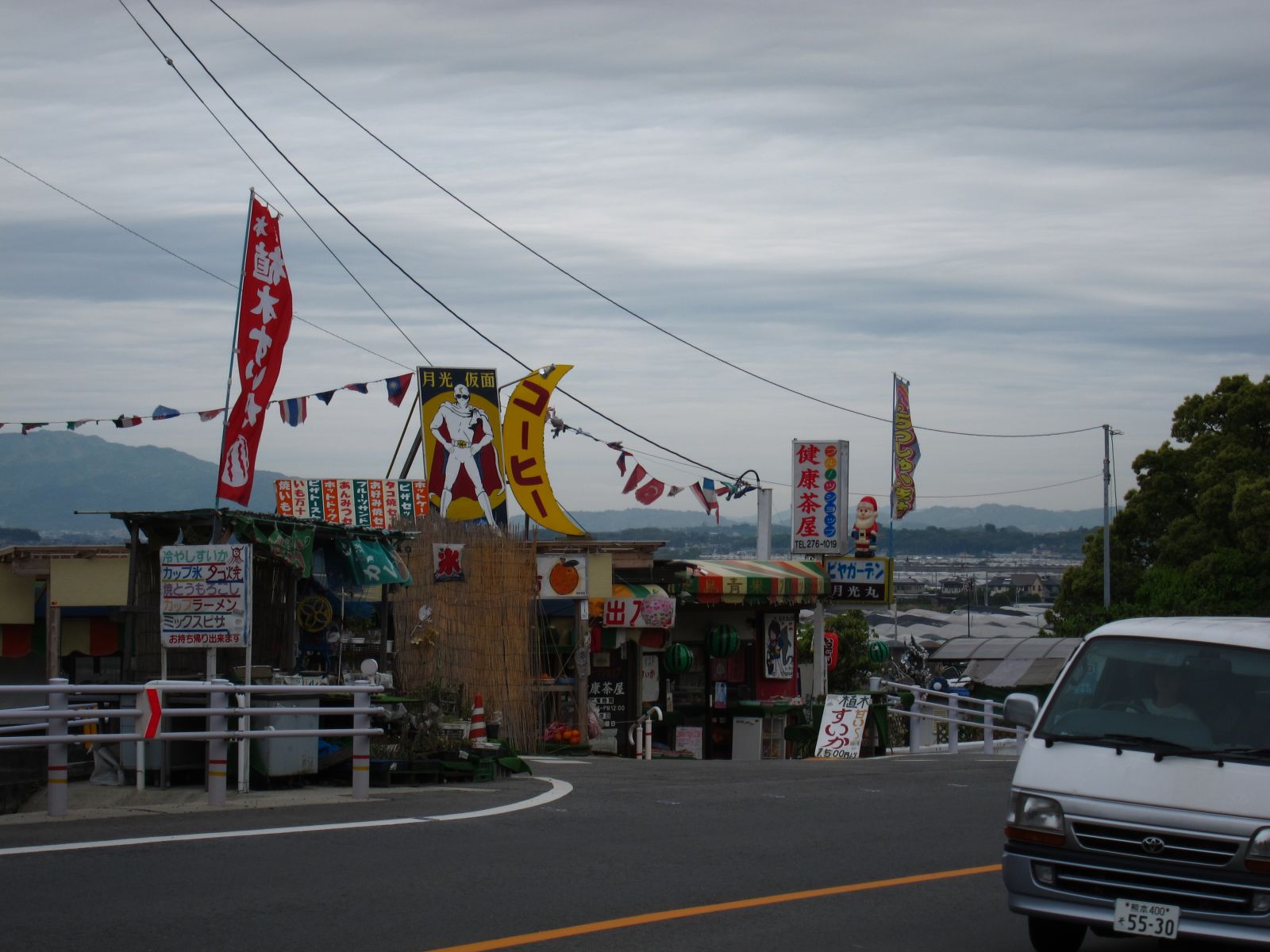 Random weird stuff at the side of the road

I had to get to Kumamoto city to get on the road to Mount Aso, an active volcano that I wanted to pass by as I cycle east towards the other coastline of Kyushu. At this point I should tell you about my way of navigating: I use a small book that contains road maps, but it doesn't really show the altitude clearly, although mountains are marked with a height mark. Usually I figure that if a road is straight, and it passes between mountains, then it's okay to travel. If it's zigzaggy then it's probably steep. I found a nice little road called route 101 which seemed like a great shortcut: fairly straight, going between mountains, and saving me at least 5-10km's of going south. Obviously I messed up. 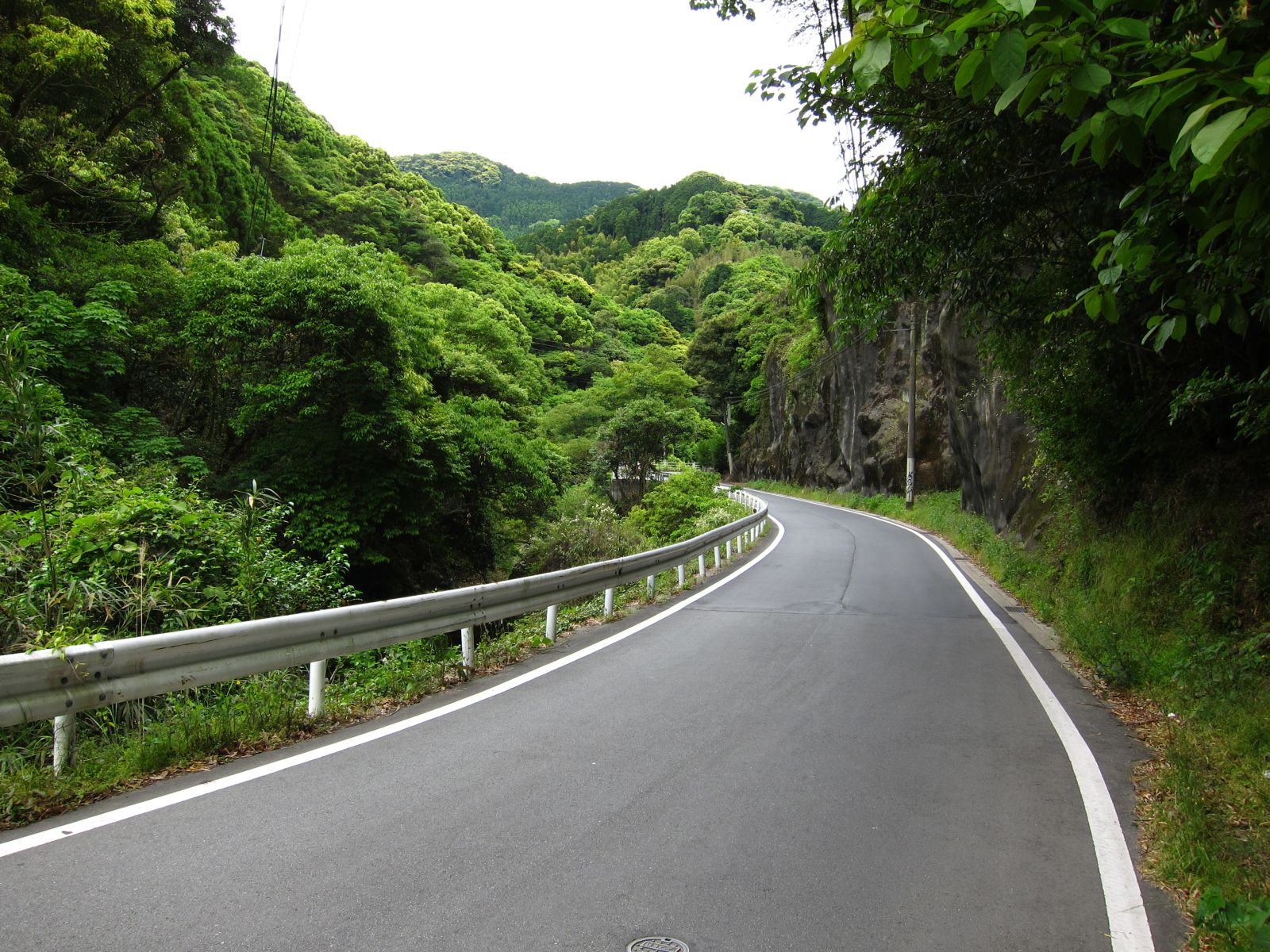 It turned out to be quite steeply uphill, with barely anyone around. Even the towns I passed through were empty, which was kind of creepy. If all the old people wake up at 4AM, do they go back to sleep at 7AM? Meh. The worst part of this road is that before reaching Kumamoto city I had to go all the way down again, making all my efforts worthless. 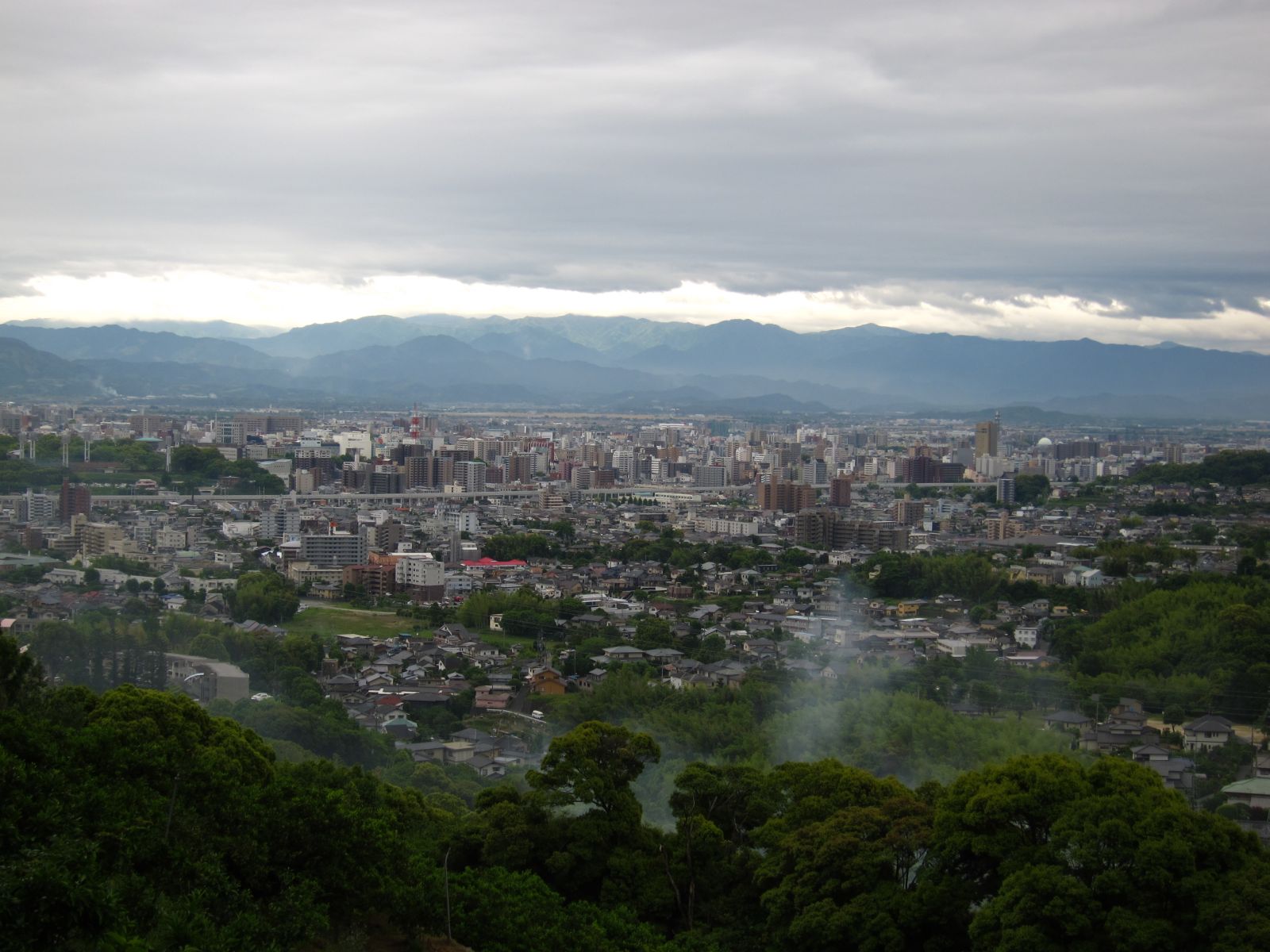 It's probably because of the flat tire I had today, but I am noticing a lot of glass at the side of the roads! I'd say that even taking into account that I'm biased I've seen a lot more glass fragments than normal today. Before reaching Kumamoto I noticed that my rear tire was not inflated enough and I pumped a lot of air into it, perhaps too much. Then I reached the city and went to a bicycle shop, and got them to insert ever more air. It's probably over the recommended limit right now, but with all the luggage I'm carrying I think it's ok. It feels a lot better now. 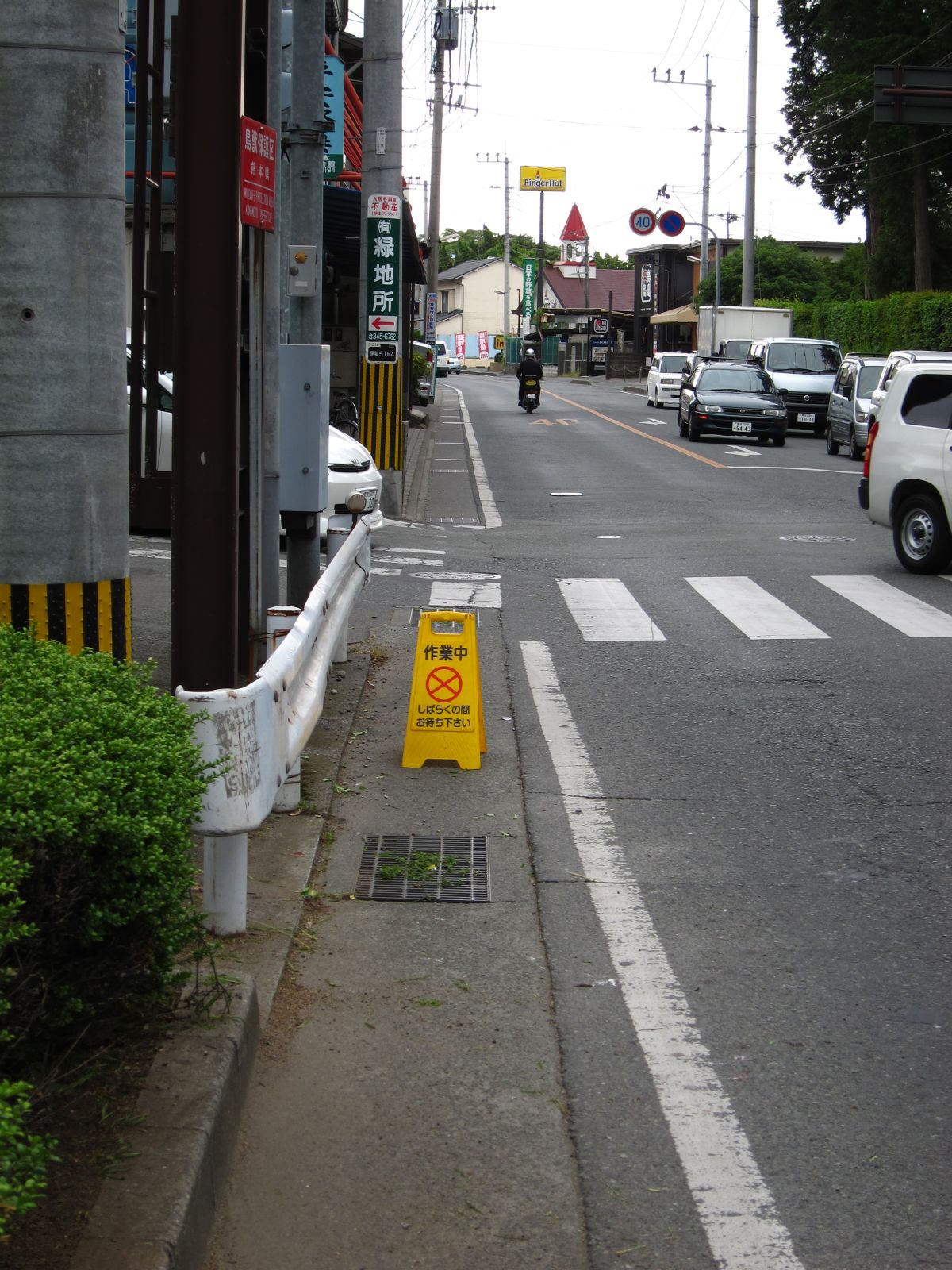 Cycling through the city I found a bunch of these things at the side of the road, saying that there are people cleaning (I think). They also form an obstacle for me. Normally this wouldn't really bother me, but I just had a flat tire today and was feeling annoyed at the gloomy weather, and I had to restrain myself to kick at them. Kick at the signs I mean, not the cleaning people. There were no cleaning people, which made the signs more stupid. Not feeling in the mood to explore the city I cycled on towards Mount Aso. 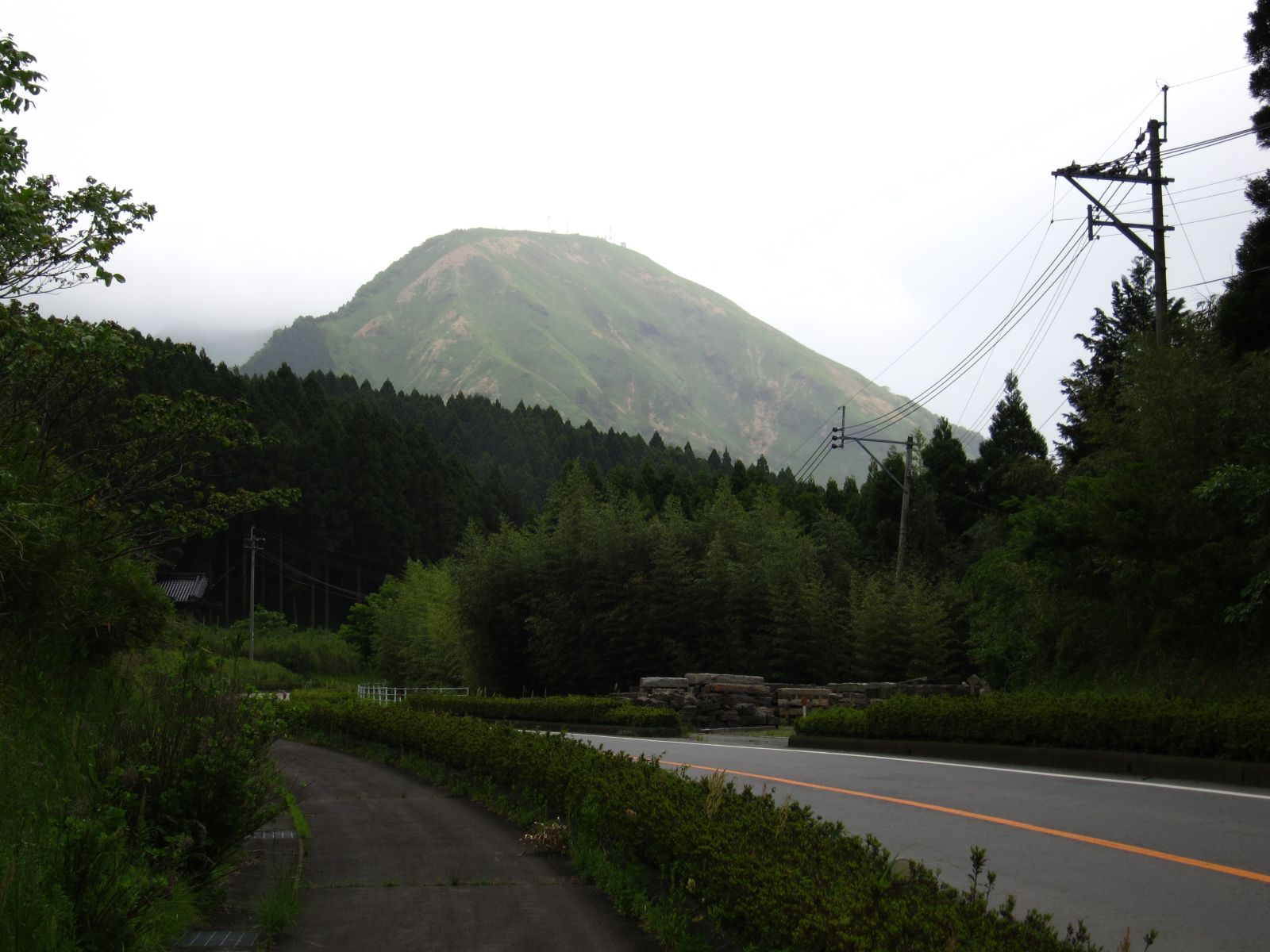 The beautiful mountain ranges and the active volcano were nowhere to be seen because everything was cloudy and dark and shit. Quite a letdown. Especially because the climb to get there was the worst climb I've experienced since climbing to the Fuji five lakes area on the first and second day of the trip. According to my altimeter I've climbed about 550 meters, though that might not be exactly accurate. It was a very long and steep uphill road, and to make things more fun for me they had construction workers at the steepest part of the road, narrowing the road even further and making it rather easy for trucks to hit me and score 50 points for a gaijin on a strange bicycle. Or a strange gaijin on a bicycle.

I was riding route 57, which split before the Aso area, and I chose route 325 to go south. Passing over a narrow bridge with no room for bicycles I enjoyed my first downhill for about one minute, then realized that immediately after that there was another uphill. And another one. And another one. The road kept going slightly downhill, then steeply uphill all the way until my destination. Again, normally this wouldn't bother me, but today really was not normal. Ever since fixing that flat tire my gears have been acting weird. I can no longer upshift to the highest gear at the front, decreasing my maximum speed from ~35kph to about 20kph. Not good at all, especially on the downhills. In the past I was able to shift up at a certain speed at a certain pedaling rate, but now that doesn't work any more. I tried hard though on every downhill, going 30kph exactly, trying to push the damn chain in the right gear, but ended up failing and swearing to myself. To make matters worse the rear sprocket is also acting up, and sometimes when I change down one gear it changes down three or four gears instead, almost making me fall on my face and making me curse even more. I am not happy with my bicycle today.

Eventually the road stopped going down then up, and settled on just going steeply up. Since I was always in second-lowest gear I didn't have to worry about my gear problems any more. And just as I was finding a good pace, I got stopped by the police. 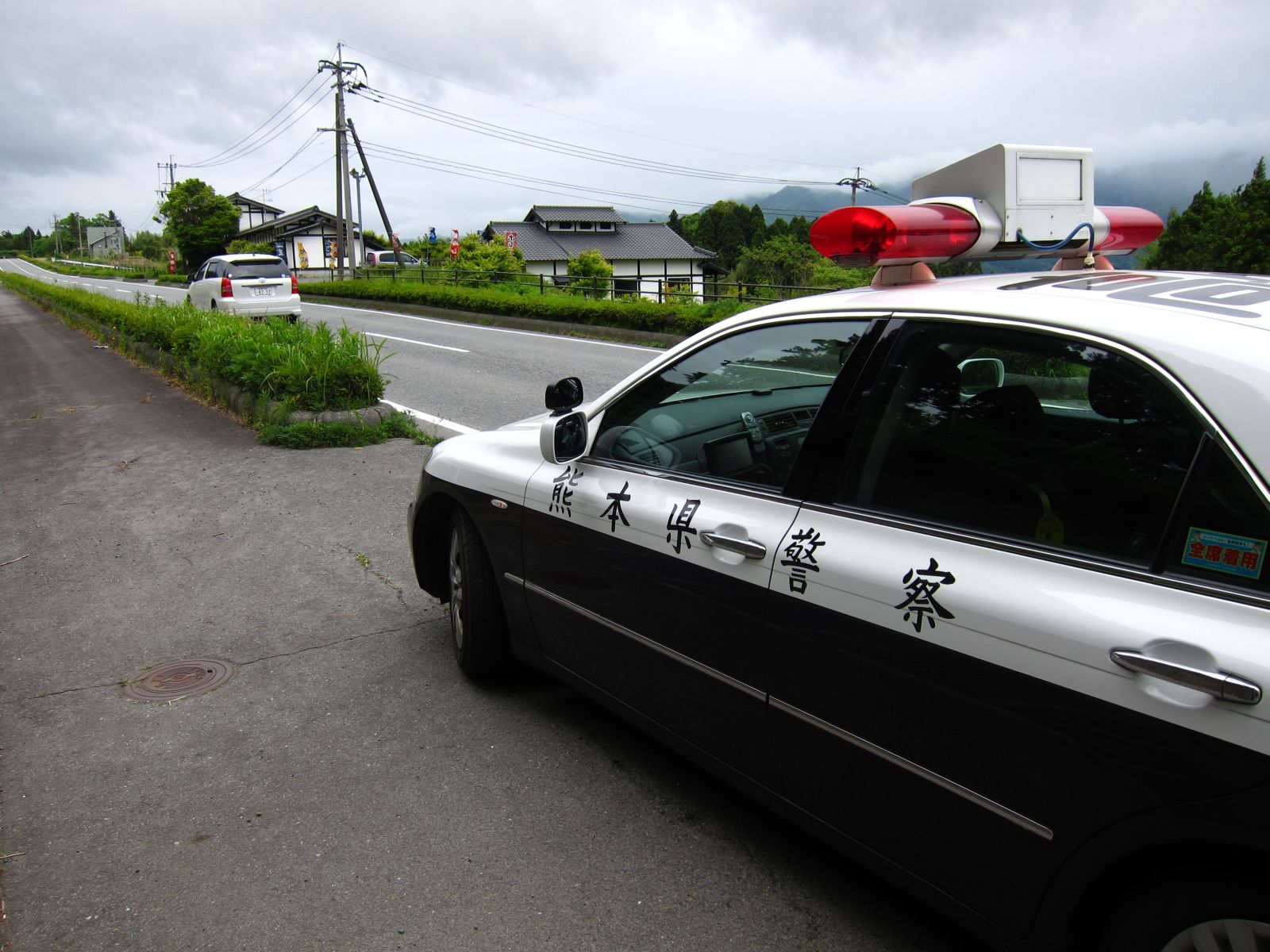 Why?! I didn't do anything wrong! I was even driving on the sidewalk this time! I can just imagine the train of thought in these police officers.  "The weather sucks and we're bored today. Let's bother a foreigner because he might do something bad."

When they first stopped me I thought that it was just that, and they were looking to chat. So I put on my friendly face even though I was swearing and cursing at my bicycle and the mountains and the rain and everything else just one minute before, and I chatted with them. One officer did the smalltalk while the other one made sure that I didn't kill any people in the past. The good cop chatted with me about all kinds of things, but the bad cop was very straight-to-the-point and didn't speak much. When he asked me where I was going, I told him I was going to a hostel about 20km's away. I guess they thought it was suspicious that I didn't have a reservation, because after I told them that he wanted to see my alien registration card. I showed them, and bad cop went in the car to investigate me. Ok, I can accept that. I haven't been stopped by the police even once on this trip, so I guess one time is acceptable. But it wasn't just over in five minutes, no. It took a good 30 minutes of standing in the rain, getting colder and colder, while bad cop checked to see if all my information checked out. It's nice that policemen have nothing better to do than stopping poor innocent gaijins suffering on a hilly road, but I was trying to reach the hostel before dark, and waiting in the middle of nowhere for 30 minutes is not helping! 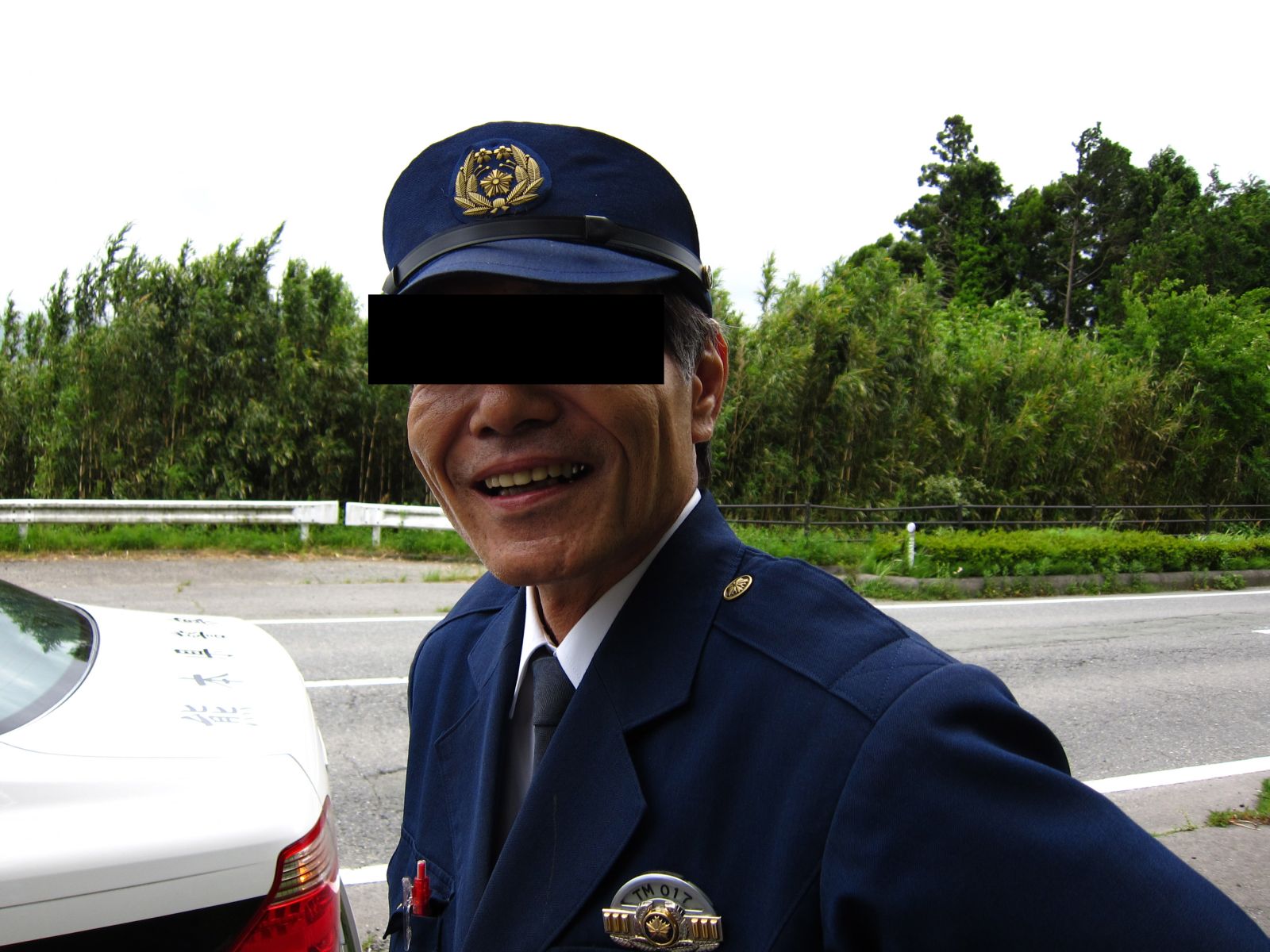 (I did of course ask his permission before taking this photo)

They finally let me go, and I continued on my way to the hostel. Note that in my original plan I would camp near Mount Aso, but the crappy weather and the delay because of the flat tire made me change my plans. Getting close to the hostel I asked directions at a convenience store, and found it rather easily thanks to the map they gave me. 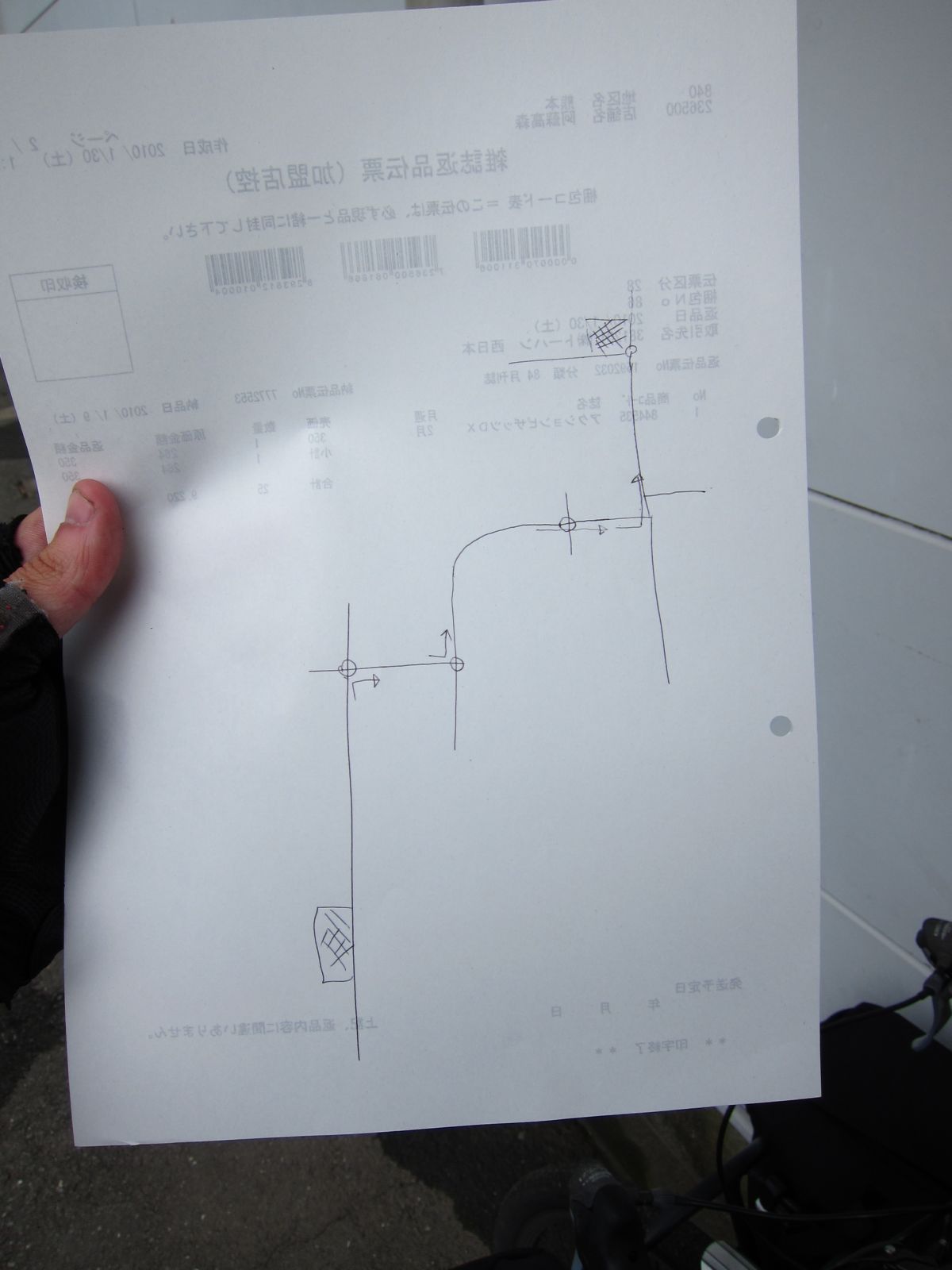 On bright sunny days I'm not really bothered by much. But on days like today everything annoys me. Suddenly discovering a huge insect on my leg while I'm cycling, seeing glass at the roadsides everywhere, climbing a useless uphill because after that the road goes downhill and then uphill again, fighting a very strong wind for the whole day, wordpress being slow, the 'r' key of my keyboard nearly not working, gears failing, tires puncturing, getting stopped by the police for nothing, and so on, and so on.. I did a lot of swearing today (in English, in case you're wondering). Some of the bad things I chose for myself, like the route, some of the bad things are out of my control, like the weather. But other than that a lot of things did not go quite ight today. GUH 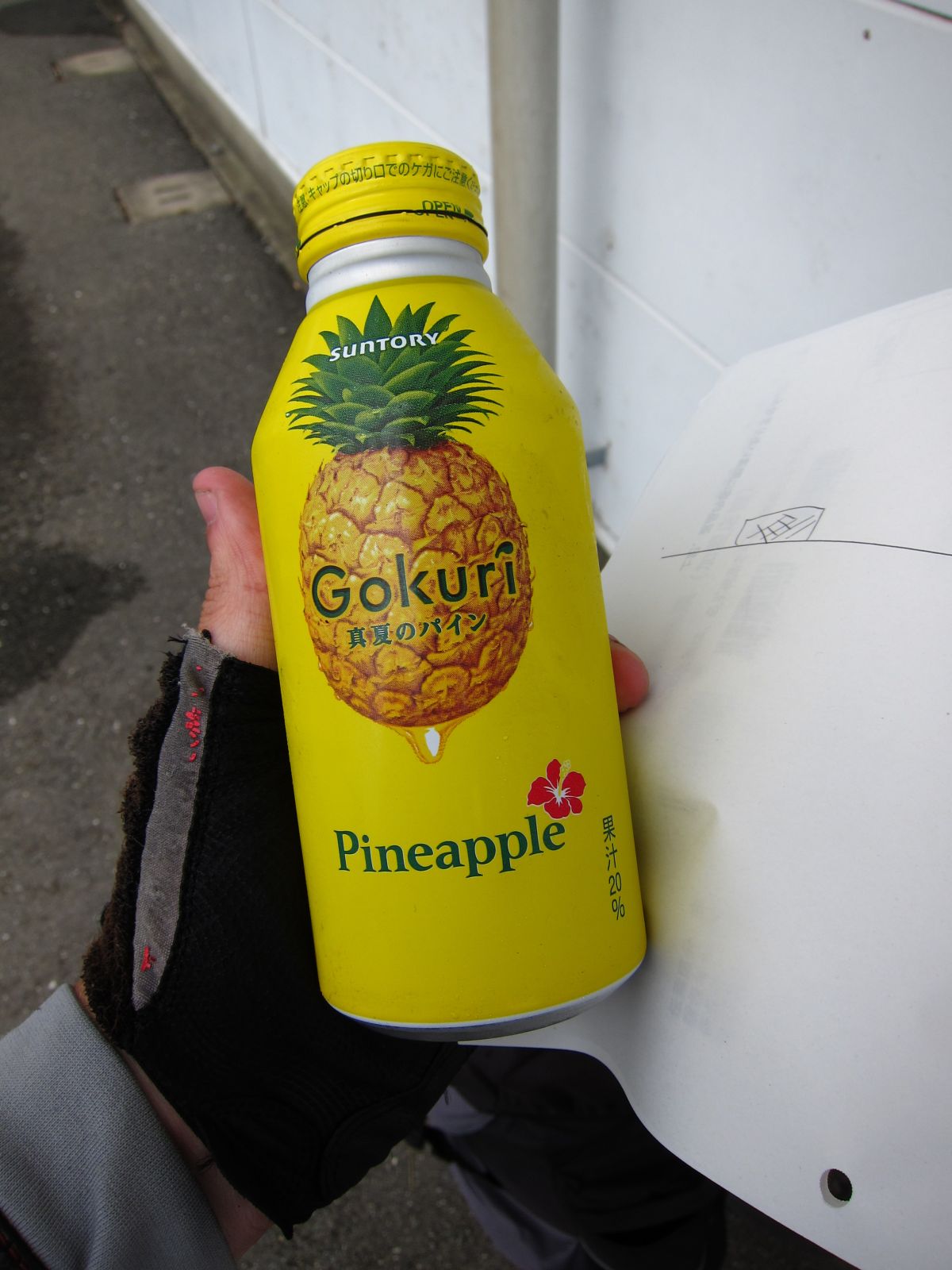 But this drink at least is awesome

The rain is starting to pour down now. Tomorrow might be worse than today. But I doubt it.

Posted in Spirit of Japan , Uncategorized