First of all, thank you all for your comments during the trip! It's great to know that people are following my travels :) That being said, I should tell you all that I will definitely continue blogging during my journey home and after that. There might not be great adventures for a while, but I"m sure I can find something to write about.

That being said, let's make yesterday's post a little bit more positive, shall we? Yesterday night after blogging I hung out with my new buddy Fumi, the image recognition expert who walked here. Another guy appeared too, called Nishi, also about the same age and knows a lot about CG modeling. They both work in the Tokyo area. It's quite funny to see  how 3 engineers from Tokyo somehow ended up in  a tiny fishing village in the southernmost point in Kyushu.  That said, I guess we all felt relieved to talk to people we could relate to, and we quite enjoyed ourselves. 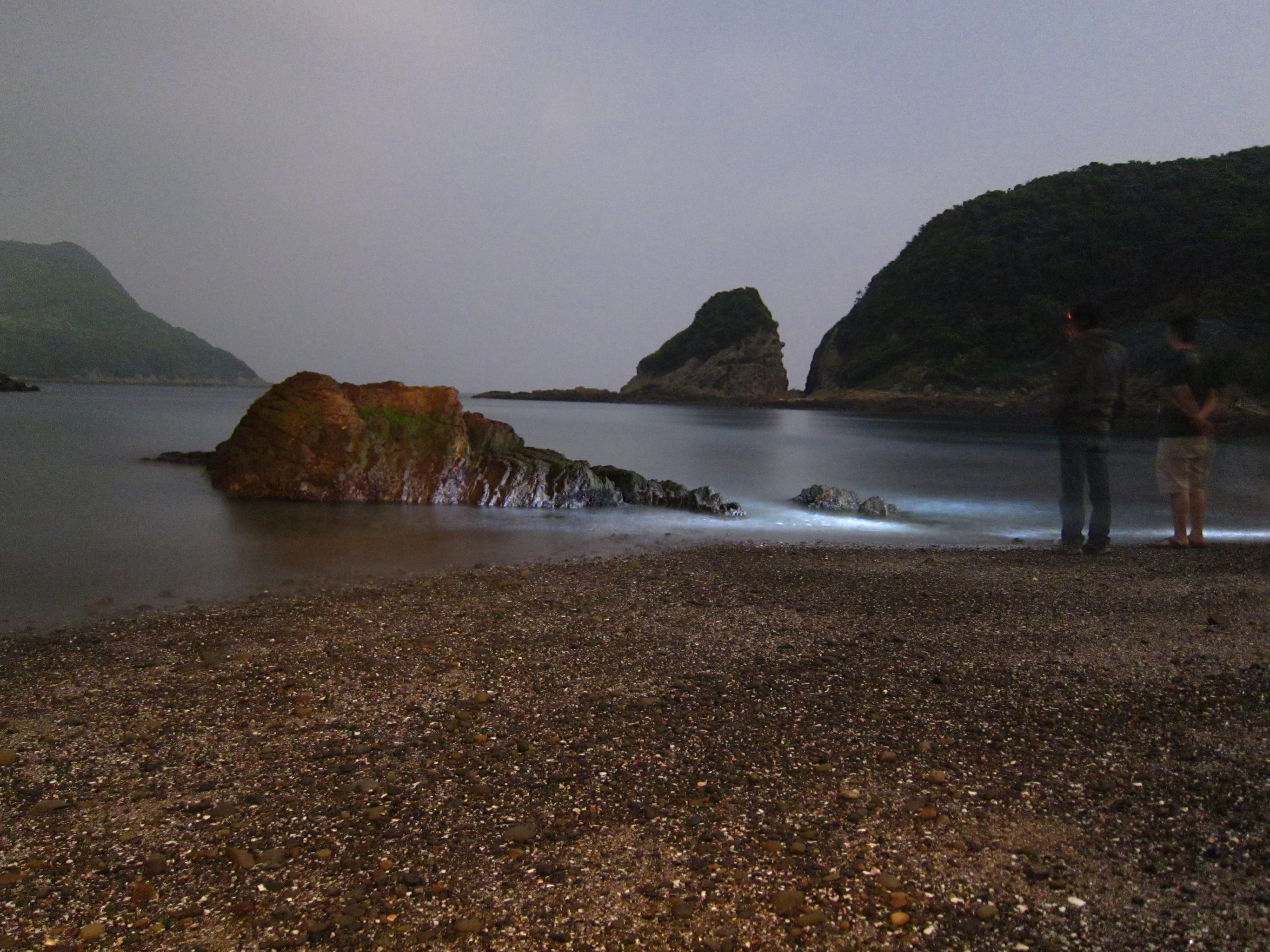 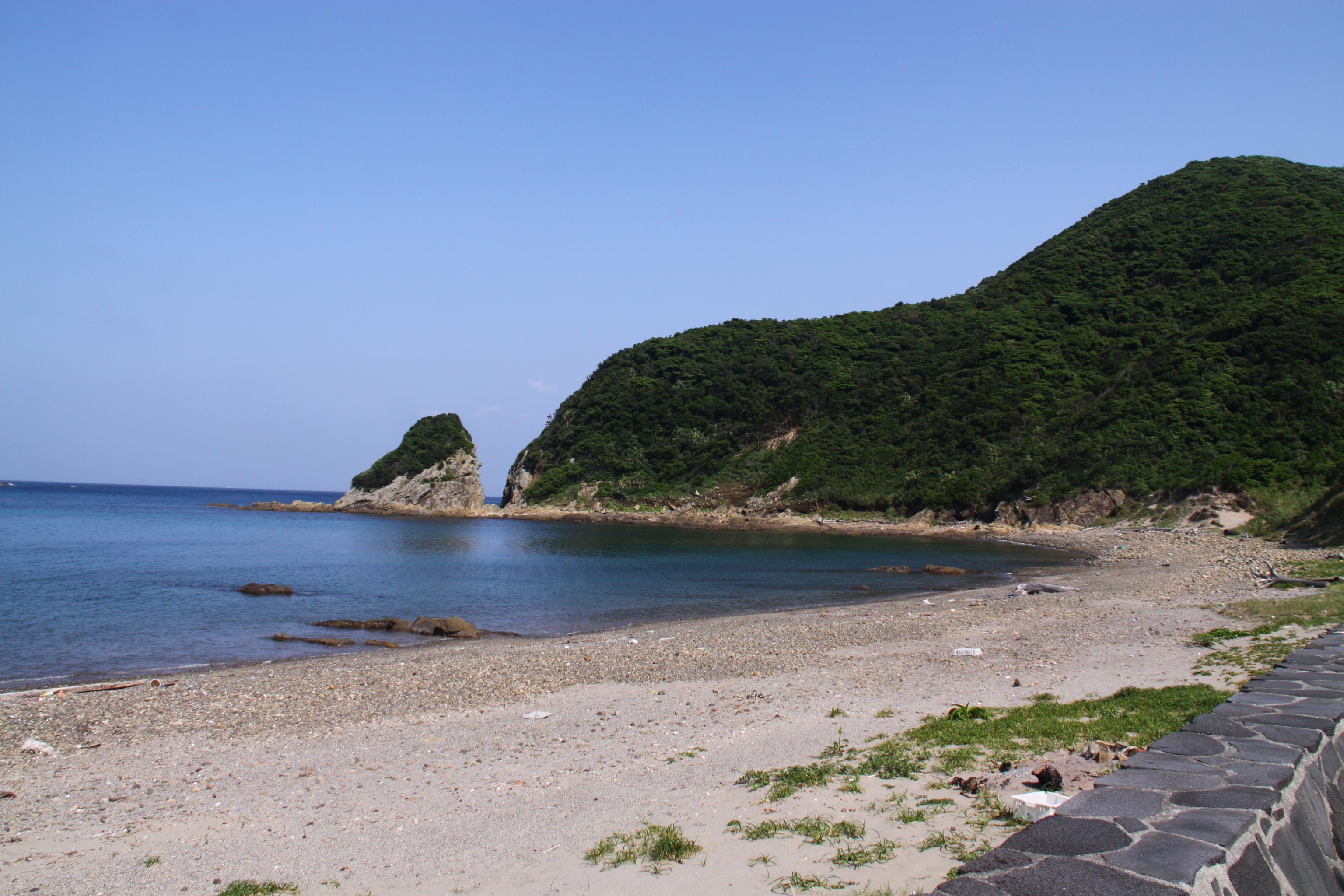 View from the campsite during daytime

Today I woke up around 8AM, sweating as the sun turned my tent into an oven. The weather was awesome today, great temperature and a slightly cloudy sky. In the morning I went out with Fumi and Nishi and walked around the village, shouting 'Good morning!' loudly to everyone and discovering that even in the morning there is no plain bread in the tiny grocery store. After a while we went back to the camp site and hung around for a while. I used the time to adjust my brakes and managed to get them to work reasonably well again. I think they'll hold at least until Tokyo. After that we climbed the rocks at the seaside, which offered some pretty interesting sights along the way. 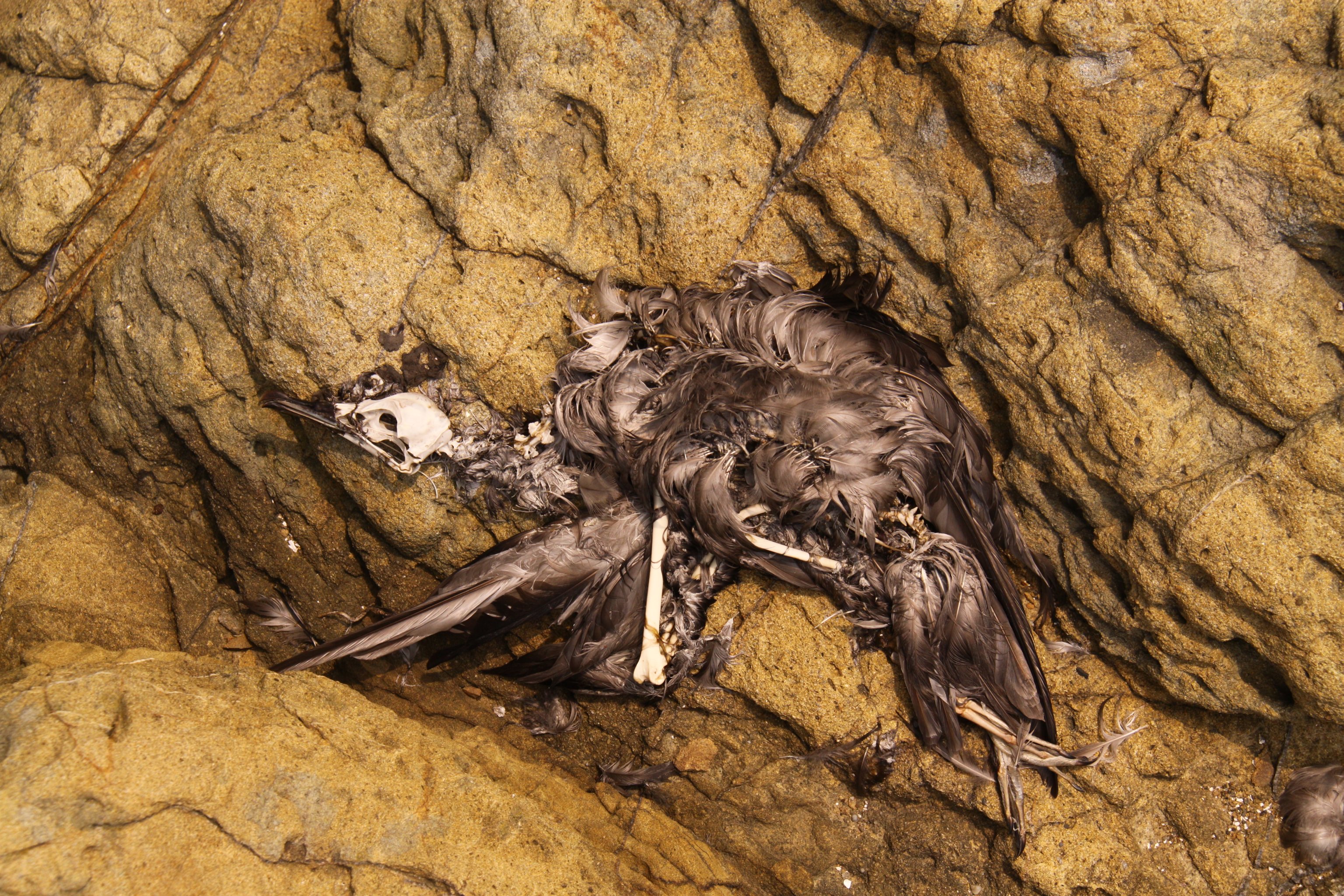 Since it was getting pretty hot, I suggested mildly that we go to a nearby beach and swim, which my companions thought was a slightly crazy but acceptable idea. Nishi took us there in his car, saving us a good 30 minutes of walking time. When we finally got out in our swimming attire we realized that it was actually quite bloody cold, but we swam anyway, in a beautiful blue ocean at a great southern beach. It was great. Oh, and I took photos of monkeys on the way.

After that we stuck with Nishi and his car since he had to go to the supermarket anyway, which was way too far to reach on foot or by bicycle. We looked around for an onsen (public bath), but found out that there used to be one but was now closed. We then searched for a ramen place but found that the closest ramen place was at the other side of the ocean and we had to take a ferry to go there. Yay countryside... We gave up on ramen and headed back to the campsite.

On the way back we saw a big colorful sign about something that I didn't quite understand. I asked Nishi and Fumi what it was about, and they told it was some Buddhism-related place, but I didn't quite get their explanation. Perhaps they were not sure what it was either. We decided to check it out and took the side road, which turned out to be a very narrow road going into the mountains (and basically jungle, at this point) for several kilometers. On occasion a monkey would cross the road, which became more frequent as we got higher and higher. Then suddenly, in the middle of nowhere, on top of a mountain, there was a huge gate. 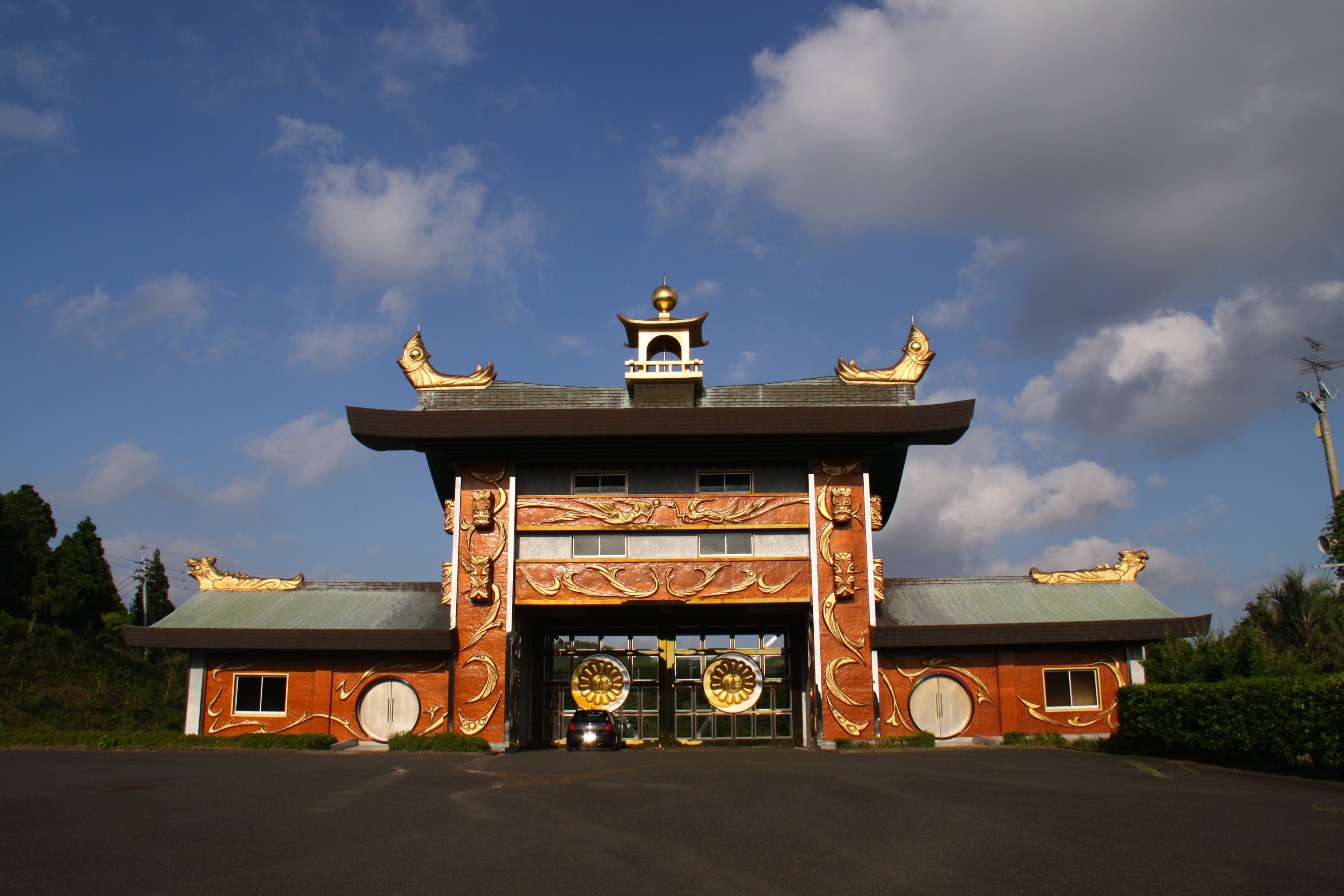 We went further along the road, and eventually found this weird place of worship, as you can see in the photos. We couldn't quite figure out what the huge square white building was meant to be, but climbing a nearby hill we found out what was lying asleep on top of the building. Here's a Google maps link so you can see it from the top. 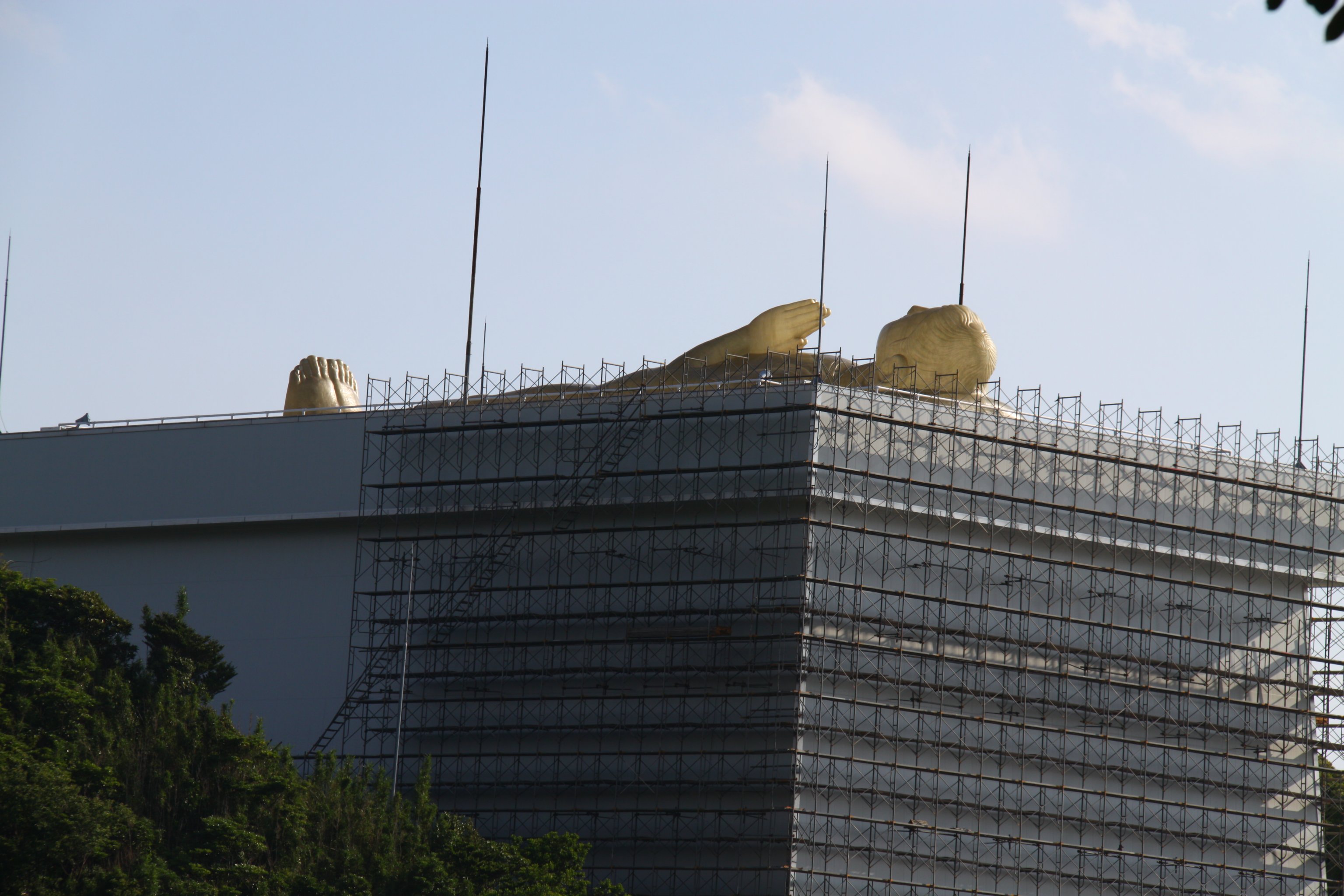 Resting peacefully on the roof of a building

That's right. A huge statue of Buddha facing the heavens. What's incredible is that this place is nearly impossible to find, the statue nearly impossible to see, yet everything is so huge and expensive. Some important guy must have paid a lot of money to have this made in the middle of the mountains. 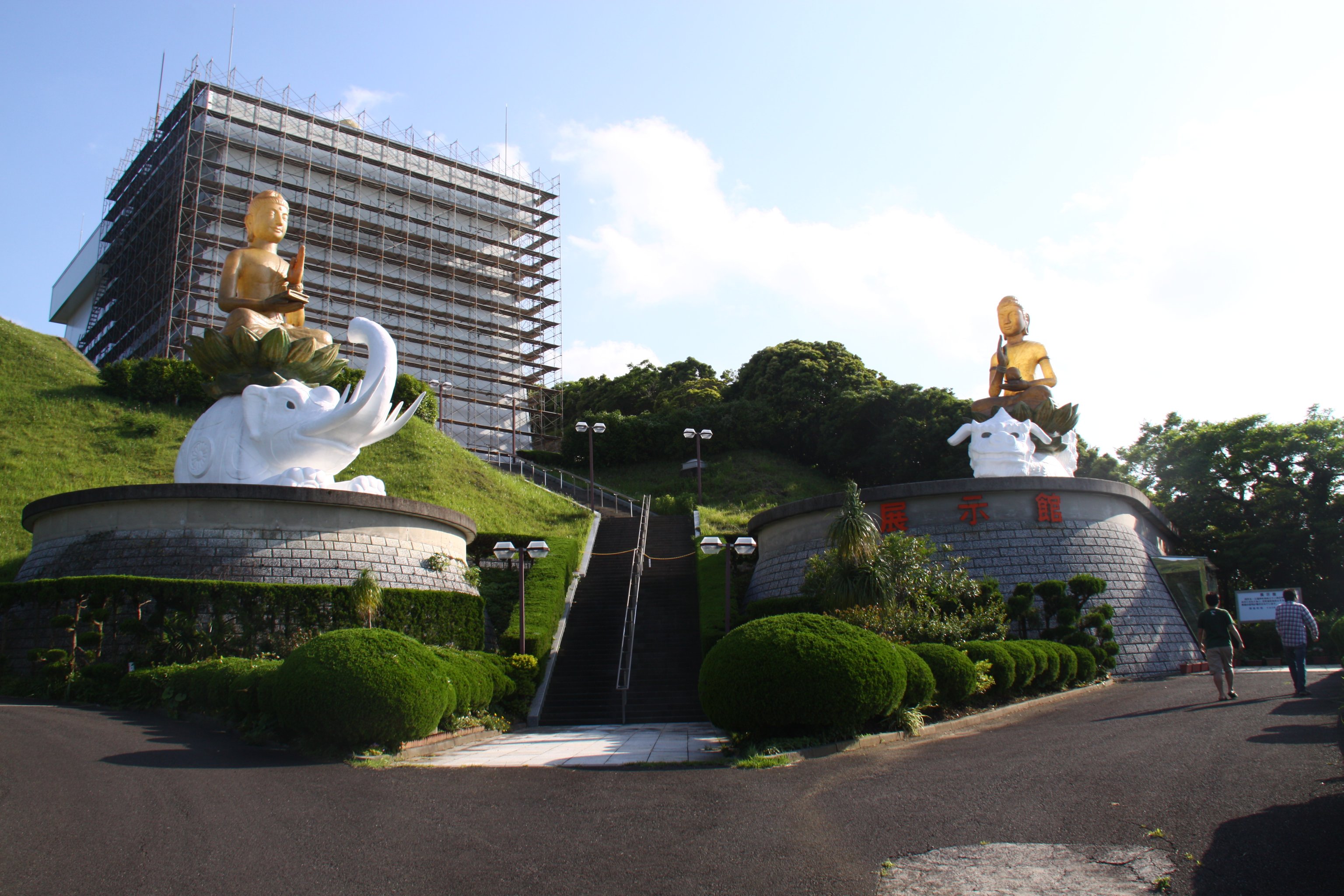 The area close to the big Buddha building was off-limits, but there was nobody around so we decided to take a peek. As we took the road up to the building a construction crew suddenly appeared within view. We asked them about the building and what's inside of it, and they told us that they weren't allowed to enter the building and were only hired to fix the outside. It's a big mystery that will have to remain unsolved.. 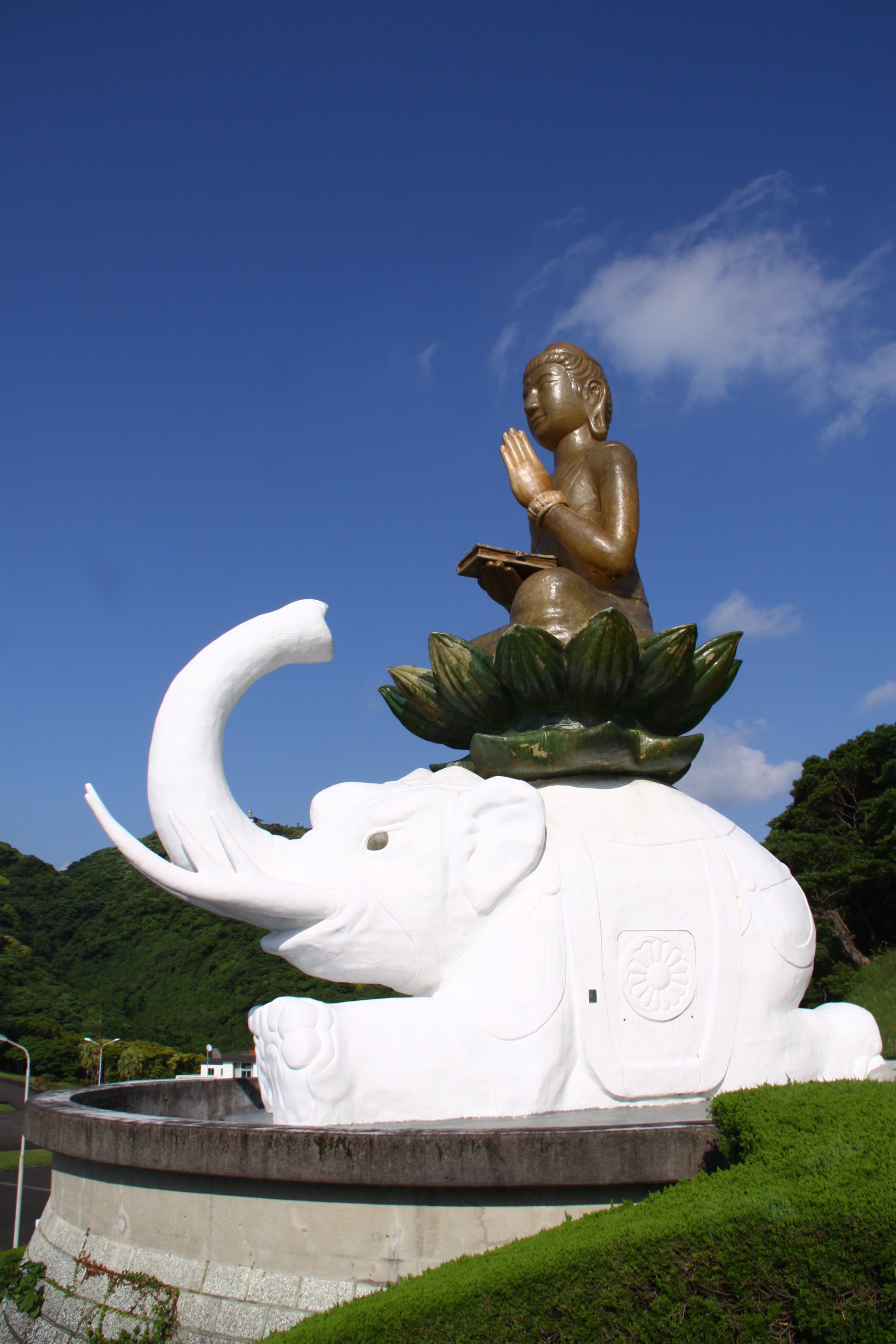 I want to post more photos, but I'm very tired, so maybe later. Tomorrow is supposed to be good weather so I've decided to hang around here for one more day. I'm not in a hurry now, and this place is actually quite nice if the weather is good and there are people to talk to.

In the meantime, I've been looking for cheap accommodation in or near Tokyo for longer periods of time. If you're staying in Tokyo for longer than a couple of weeks it's very expensive to stay anywhere. My recommendations were a company called Leopalace, which rents furnitured apartments on a weekly or monthly basis, but even that is quite expensive in the long run. Then again, staying under a bridge in my tent is not an ideal solution either.. Oh well, still a week time to decide, and I can always stay in a youth hostel for the first week or so.