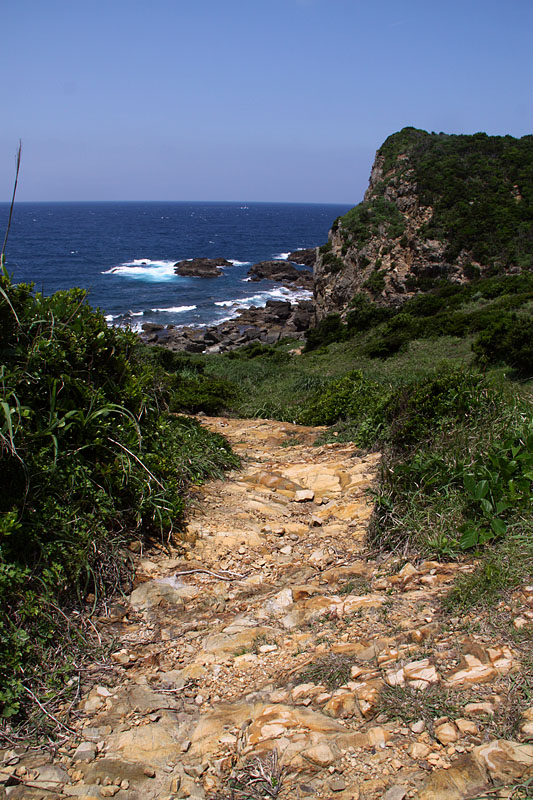 (Picture taken two days ago when I went walkabout near Cape Sata.)

Today not everything went quite right, as you may have guessed from the last post. But first, let me tell you a bit about my travel buddies. Both of them have recently quit their jobs and have been traveling around for a while. We reached the southernmost point of Kyushu at around the same time, and I guess we were all thinking about what to do next, but didn't feel quite satisfied yet. Being in similar situations we got along quite well, and we decided to extend our journey a bit by going to Yakushima island, a place famous for unspoilt nature, beautiful scenery and a lot of rain.

Yesterday morning we noticed a group of children playing in the bay in front of our camp site. They had kayaks and tiny boats and were playing around. We went closer for a bit to see if it was possible to rent the kayaks for a while. I made a miss in my Japanese, asking the owner if we could "use his kayak" instead of "rent his kayak". A bit rude of me, but he agreed! 30 minutes later we were in the water, peddling around happily. A good start of the day! Since it was all quite sudden I completely forgot to take pictures until after we took the kayaks out of the water though.

In the afternoon I was planning my route back to the ferry in Shibushi and Fumi was getting ready to continue his trip on foot. I went to bed early that night before, but it seems that in the middle of the night two fisherman showed up in a van, changed into wetsuits and went into the water to catch some kind of shellfish with their spears (are they called spears? I dunno). They returned with three of them, which they ate together, all while I was sleeping... The next day we made soup out of the remains, which tasted quite good. 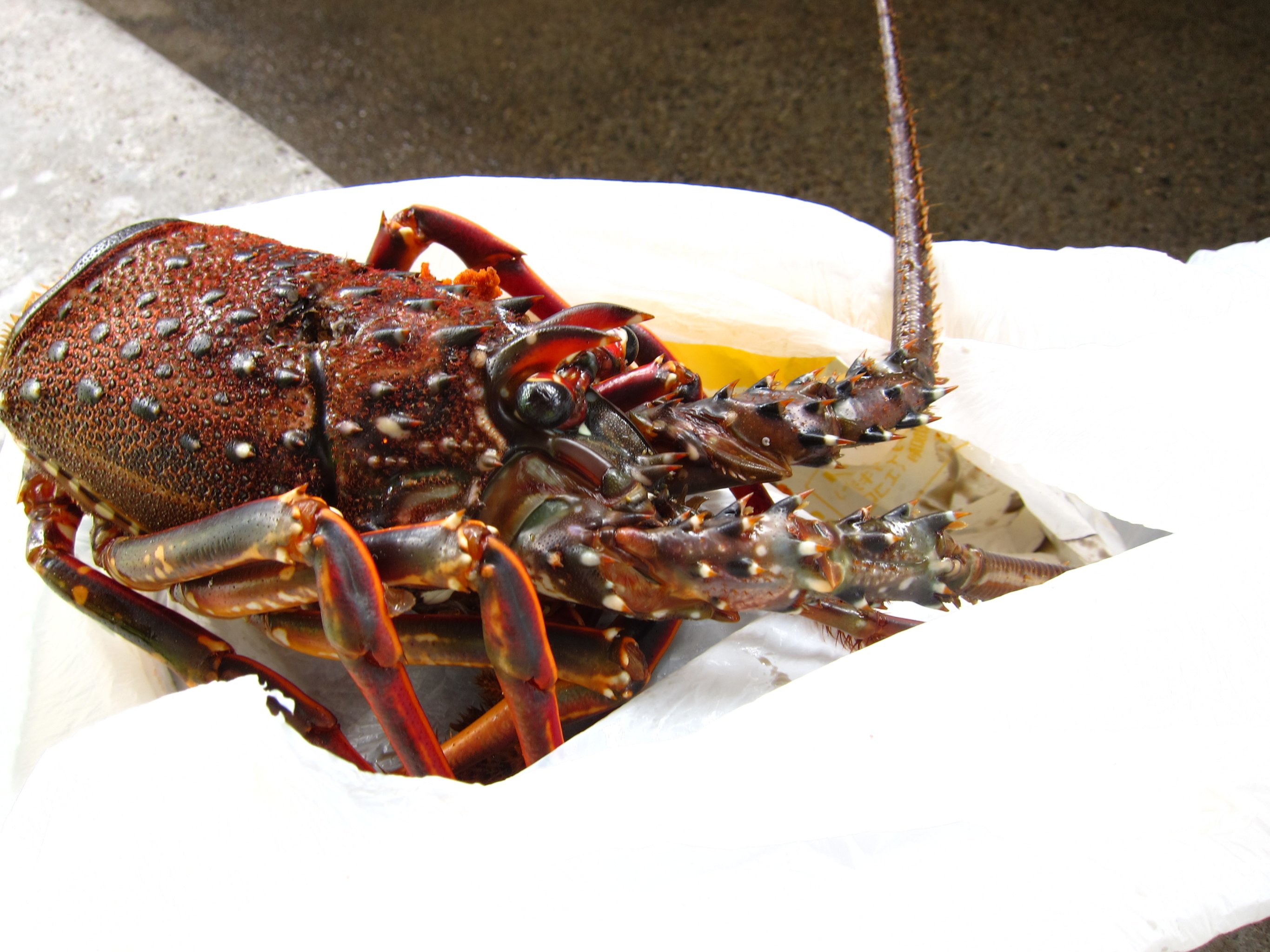 It seems that you're not allowed to catch these things, because the local population lives off the profits of selling these to big companies. Seems like a big one like this could cost you 1000 yen. But I guess it's ok if you catch them just for eating and don't sell them.

During lunch we got to talking about what to do next, and we were all kind of reluctant to go back, me not in the least because staying in Tokyo is expensive and camping is a much cheaper lifestyle. Both Nishi and Fumi seemed interested in seeing an island called Yakushima, which is apparently quite famous for its beautiful nature. Since I have a lot of free time also I decided to tag along. We took Nishi's car and went to Kagoshima city, as Nishi's cell phone didn't have a signal at the southernmost point and he had to confirm his schedule. In the city we checked the ferry times and price and had a most excellent ramen, one that I can easily say is one of the best I've ever tasted. 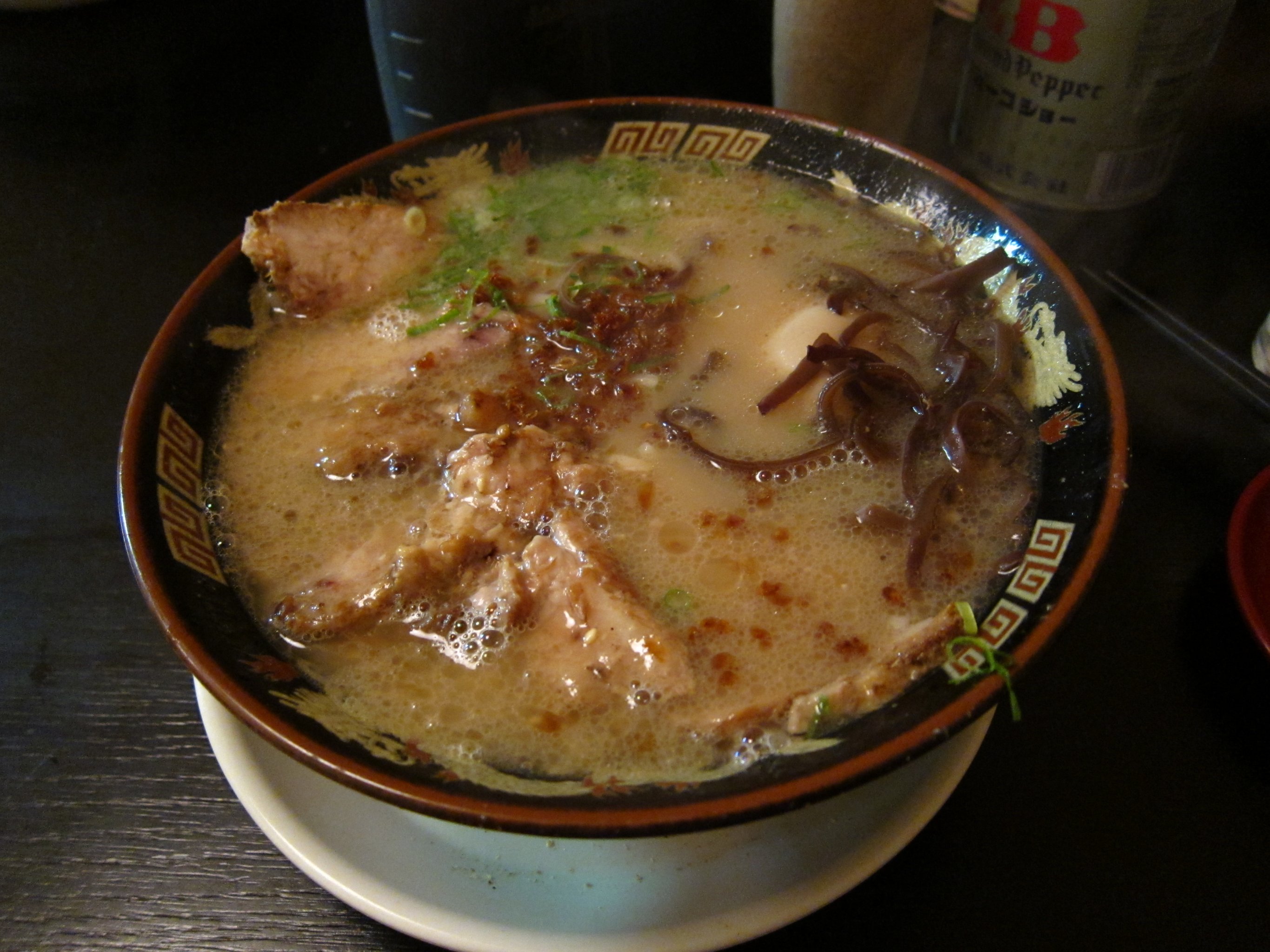 Then, deciding on where to stay for the night, I was thinking youth hostel, but it was already fully booked. If we wanted to stay in the city then that pretty much left us with either an expensive business hotel or camping in a park with the risk of getting caught. Both not really nice choices. Since Nishi had time anyway we drove south again to a place called Ibusuki, where we found a camp site that was unfortunately not in operation and barred off with a fence. Thanks to some creative driving involving a football pitch, driving in reverse on a narrow road in pitch black darkness, and a generally large amount of bumps, we managed to reach a suitable place to camp. Fumi and I set up our tents and Nishi decided to go back to the city, where we will meet again a couple days later to take the ferry to Yakushima.

The place wasn't that great though. We arrived late at night in pitch-black darkness, so we basically chose our camping spot at will, which turned out to be next to the only working toilet building. As it turns out, that building was not in fact part of the camp site, but rather part of the neighboring tennis and gateball courts. I woke up in the morning at 5:30 by some very old people playing gateball, making a very loud noise every time they hit the ball. An hour later the manager of the place came along and told us to sod off as we were supposed to camp on the camp site, and not next to the gateball court toilet. Oops. We cleaned up our tents and I checked my e-mail in the shadow of a nice tree as Fumi took his time packing his luggage. Right around that time old people started to appear like lemmings out of nowhere. First two old grandmas appeared, who decided to sit next to me for some reason. Then a grandpa, then two more grandmas, and then a whole stream of them appeared from behind the toilet building, all deciding to sit somewhere next to me in the tree's shade. They heard me speaking in Japanese, but somehow they kept making comments about me as if I wasn't there. "Oh, he looks quite young.", "His hair is pretty", "Oh, it's a foreigner" etc. etc. It was at this moment that I decided to eat my breakfast elsewhere.

We went back to the campsite, had a nice breakfast there, and then decided what to do for the day. There's a little island called Chiringashima next to the camp site, which is connected to the mainland by a strip of sand that you can walk on when the tide is low. We were thinking of camping there tonight, but we had to wait for the tide to go down. We went into the town and found (after a rather long walk) a place to recharge our electronics. We only took our most important luggage with us, hiding our heavy luggage as best as we could in a building on the camp site.

Arriving back at the camp site before Fumi (I was by bicycle) I found that all my food was scattered on the grass! Upon closer inspection, it turns out it was food remains: empty packaging of cookies and bread, presumably eaten by whoever stole it. The thief ate all my food except my bananas, which pretty much rules out the possibility that an animal did it. Feeling rather pissed off by this I went to look at the island. The tide was low and a wide strip of sand was visible, with a lot of people walking on it. On the way totthe sand strip Fumi and I noticed a homeless guy fairly close to the camp site. I mentioned to Fumi rather loudly that I would 'definitely kill whoever stole my food', after which we didn't see the homeless guy again.

Unfortunately our uninhabited-island-camping-party stopped right there. As we got closer to the sand strip we noticed a small booth and a lot of old people who were counting the people going to and from the island. No camping allowed. Feeling rather bummed out by this, I decided to step on my bicycle and start cycling again, something that I haven't done for several days now. And it felt good. Really good. Somehow life is very easy when you're on your bicycle following the road, listening to music and letting traffic pass you by as you climb up the hill and relax on the downhill. It all just makes sense somehow. Don't need to think about anything.

I was planning to head halfway towards Kagoshima and find a place to camp, but the road was very flat and I was rather enjoying myself, so I made it well into the city before dark, where I found a cheap business hotel and enjoyed my first hot shower in about a week. The camp site had a shower but only the most optimistic person in the world would call it a hot shower..

This is only mildly related to the storytelling, but here's some ridiculous safety instructions that I came across today. 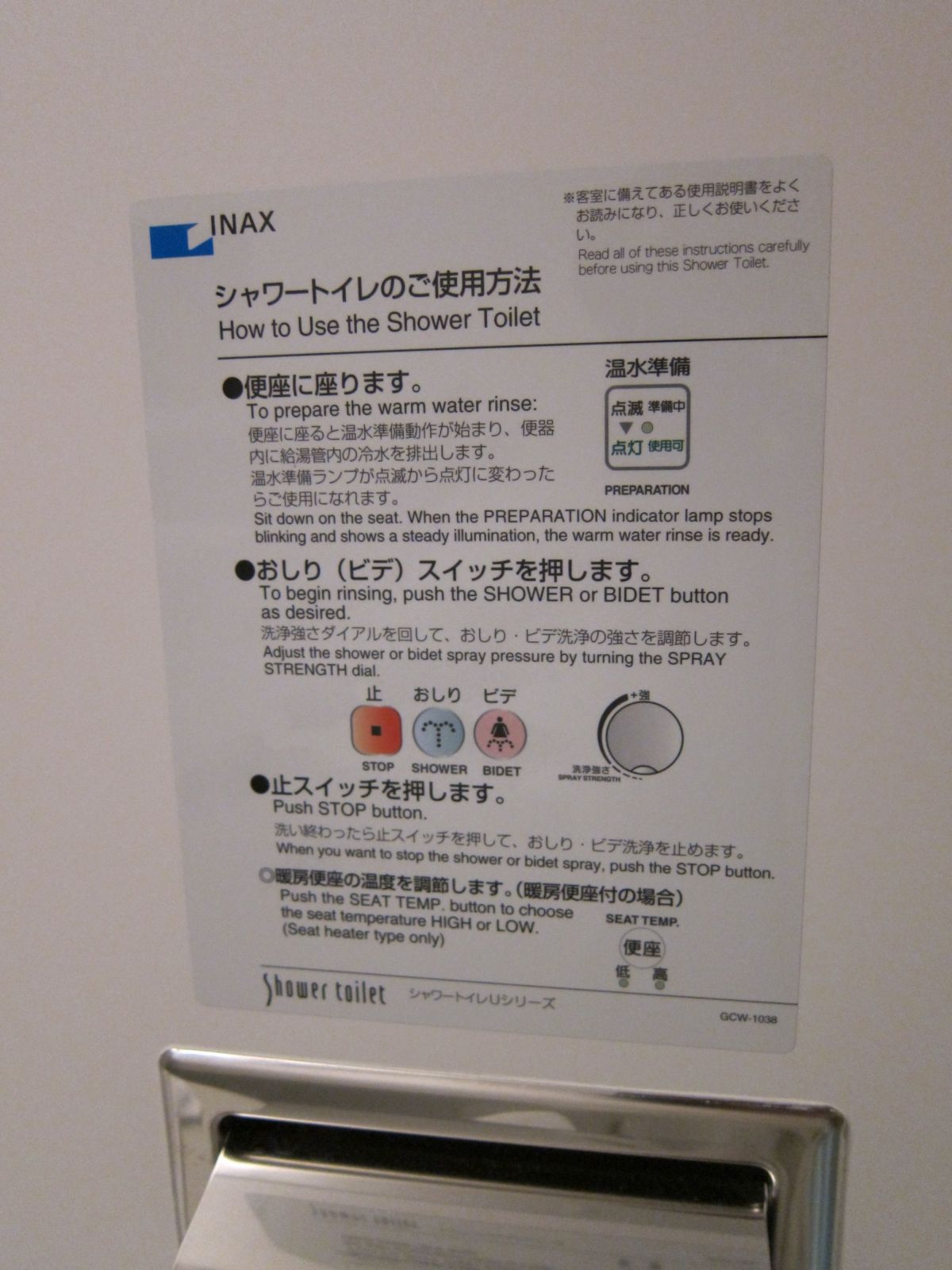 How to use the toilet

Yes, using a toilet IS that difficult in Japan. But you'll be oh so glad to sit  on a nicely heated toilet seat with more buttons than your remote control, because the alternative is crouching over a hole while hurting your knees. Japanese style toilets are definitely not my thing. 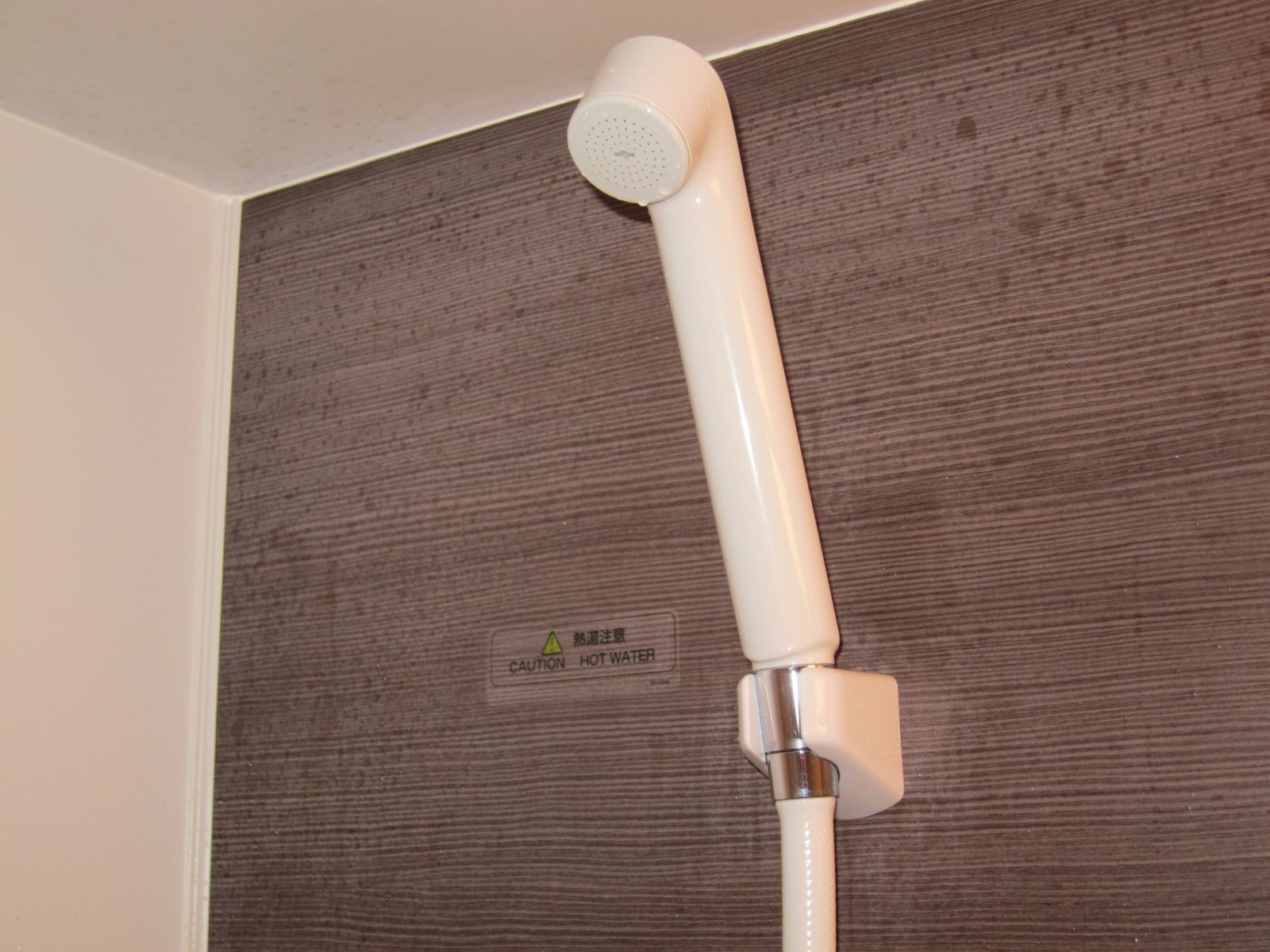 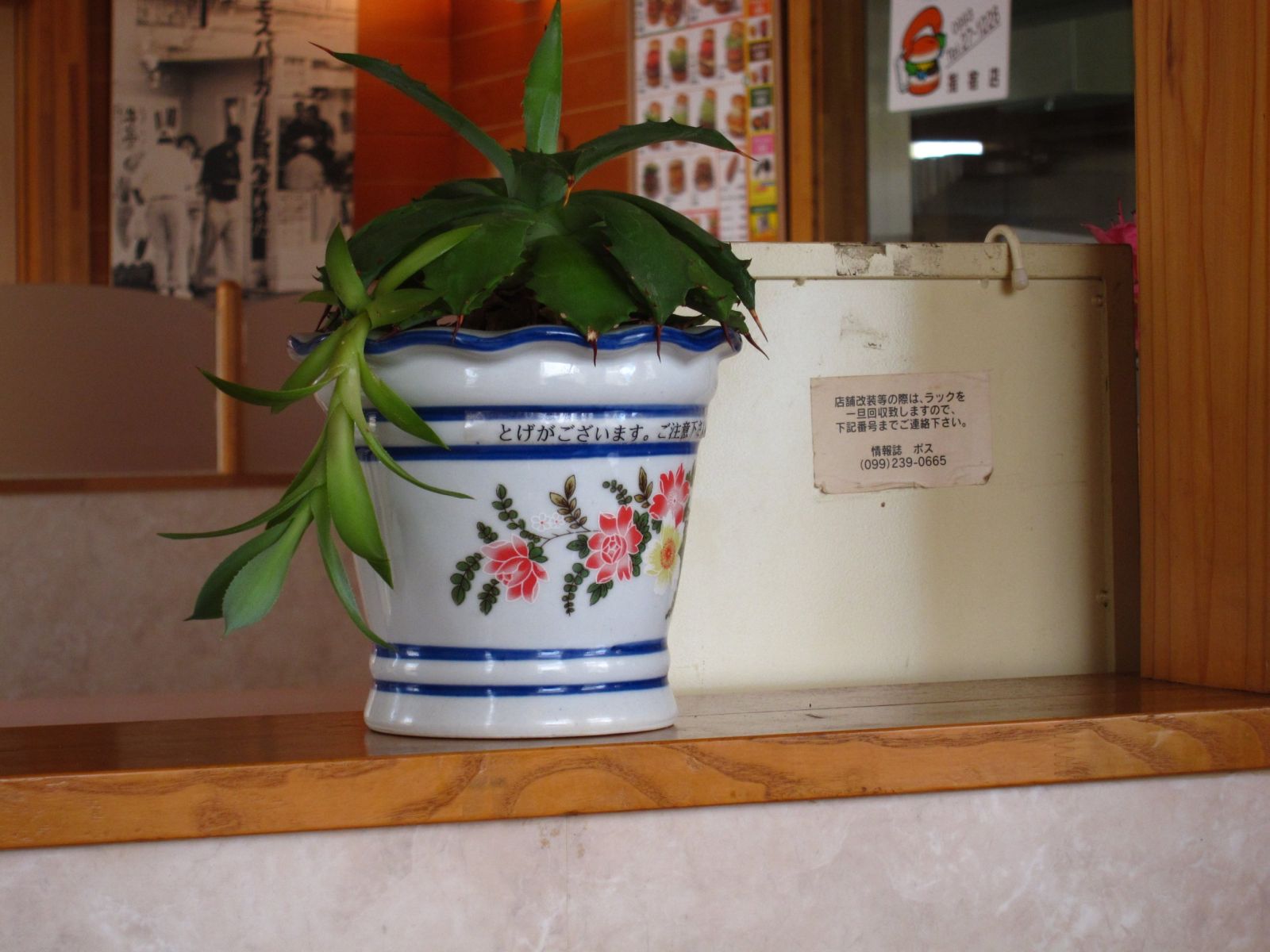 This plant can kill you

The Japanese on this plant says 'There are thorns. Be careful'. It takes longer to read the warning than to glance at the plant to see the thorns. Japan is idiot-proof.

Tomorrow I'm taking care of some things, like laundry and money (the two are unrelated :O). The day after that I'm planning to do a day trip or something, as I still haven't grown tired of my bicycle. Being in the city, I finally had a chance to pick up replacement brake blocks, and I can mount them whenever I feel like it. So far the old brake blocks are working quite well, now that I've adjusted the wire. I'll use them up a little bit more before replacing them.

(As you may have noticed by now this blog is just as much a memory assist for myself as it is a travel blog :P)