The good, the bad and the mundane

Actually, the title is a lie, because there is no bad. The closest thing to a bad thing is that my workload at Potato has increased quite a bit recently, but with that come great new challenges and fun problems to solve, so I don't see that as an altogether bad thing. I've pretty much reached that very happy point in a project where there's so many things you want to improve that you know you'll never have enough time for it. There's always too much to do: the sure sign of an active project that is great to work on.

Of the good there is plenty. Too much to mention, even. As I said, I'm enjoying my job greatly, as well as the perks that come with it (although I should really do something about that ever-increasing belly of mine..). As far as social life goes, I'm well-connected enough to have fun social events every once in a while, and I also still have enough time for solitudonal nights of programming or anime-watching. Truth be told, I really couldn't be happier right now, and I doubt that I was even ever this happy during my 'golden years' back in Japan. Although cynicism does increase with age. Cynicism is emotional deflation.

Of the mundane, there has been too much to mention. Going to work every day by train. The default drudge of coming home, doing the dishes, washing my clothes, relaxing in front of the TV. Weekends going by without any significant personal event. Hell, I'm even buying household articles I never thought I'd buy. You know you're domesticated when you think that buying a 10$ toaster would significantly improve your life. Imagine the look on my face after a couple of weeks of regularly using that damn toaster and feeling good about it.. A far cry from bicycle backpacking indeed. 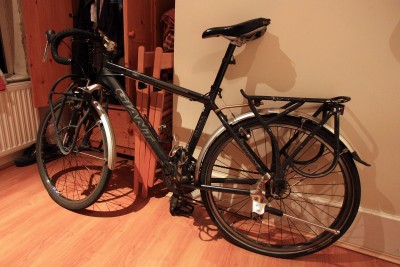 That's not to say that I've completely sworn off that lifestyle though. The bicycle is still there, ready to be used again at some point in the not-too-near future. I've taken it in for the winter, mostly because I'm afraid people will steal it if I leave it outside. It has a flat tire right now which needs fixing. I'll get around to that in due time, but I'm in no hurry. As far as this mundane lifestyle goes, I plan to enjoy every single domesticated minute of it.