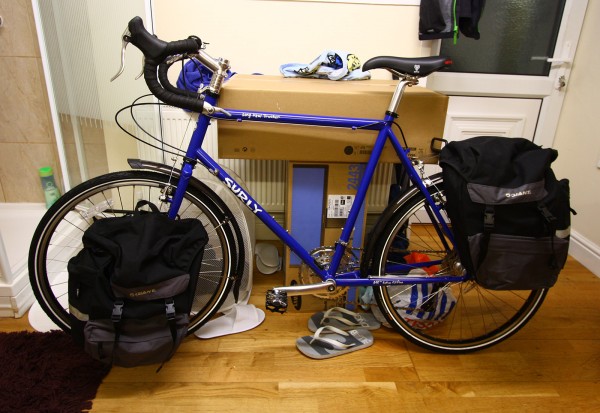 It's here! My new bicycle, a Surly Long Haul Trucker, freshly built today. I've only taken it out for a short spin today. When I picked it up it was pouring with rain, and I got soaking wet cycling during the 10-minute cycle back to work. It's hard to say anything about a bicycle having only ridden it for 10 minutes, but I think it feels robust. Sturdy. The weight feels about the same as my old Giant, which had an aluminium frame, but was a lot thicker and had front suspension which added a lot of weight. This bike is made of thin powerful steel and just feels.. solid.

The front panniers fit a bit awkwardly on the small front rack. I'll have to decide whether to get new front panniers or not. I'll just have to give it a try I guess. I can't wait to take it out for a real drive.

There's still a lot to improve. I didn't order a cyclocomp cause the one they had in the store was too expensive, and the model I wanted was 20GBP cheaper on Amazon. Same goes for lights: I bought some from the pound shop the other day, but that's just temporary until I get proper ones. The pedals are a similar story. The bike shop tried to sell me clipless pedals for 70GBP, but I'm not quite ready to commit to that yet, not in the least because I'd have to get special shoes as well. I just want casual pedals. I do miss the cage/toe straps I used to have on my Giant, so perhaps I'll order that later on. Other improvements I want to make include a compass bell (of course!) and a center kickstand thingie, if the frame allows for it. I've also seen a really cool gps anti-theft device that I may want to buy.

So much to do! Taking out for a spin tomorrow ^_^.