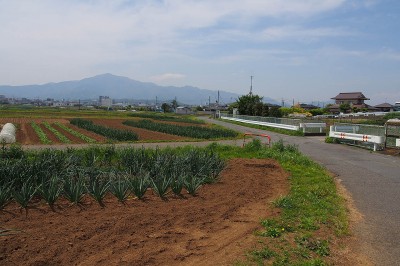 This is where I'm headed today.

Things did not go well. That was quite possibly the worst camping experience I've ever had. Yesterday's sushi was great, and the bike ride back to the place I designated as my camping site was easy enough. The place was basically a long strip of asphalt next to a beach, functioning as a parking lot of sorts. There was a toilet building and a closed-down lifeguard/storage house on the side on a long strip of grass, with the perfect space in-between both buildings to put my tent. Pitching the tent quite far back should make it very hard for people to see me and will keep me out of the wind, leaving me to have a quiet sleep.

Well, that was the theory. Let's just say that I was very over-optimistic about my chances of getting a quiet night's rest there. Being right next to the toilet building, people kept occasionally passing by to get to the toilet, then suddenly screaming in terror as my very well-hidden tent sprung into view. It really was very well hidden; the light of the toilet building made it pretty much impossible to see until you were right on top of it. 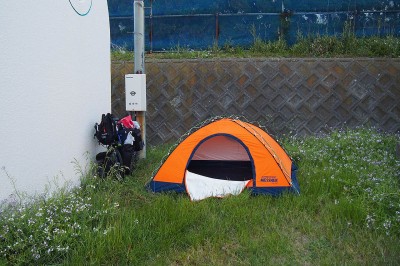 It was fine in theory..

This kept going on until 10-ish, when things finally quieted down. I was nearly asleep when suddenly I heard a loud barking and a flaslight, and another exclamation of surprise. It was a middle-aged lady walking her dog. UGH. At least she left me alone after that, but occasionally a car would drive by and stop right in front of the toilet building, sometimes shining their headlights right onto my tent.

Finally, around 1AM, I somehow managed to fall asleep. But it didn't last long. At 3AM some ASSHOLES decided that it would be a good idea to have a FUCKING BARBECUE right in front of my tent. The strip of asphalt was at least 2km long but these motherfuckers decided that the best place was indeed right on front of my tent. There were at least 8 people, lots of beer and loud voices. And they knew my tent was there too because they kept shining flashlights on it. Inconsiderate assholes. I should have slashed their tires or something. 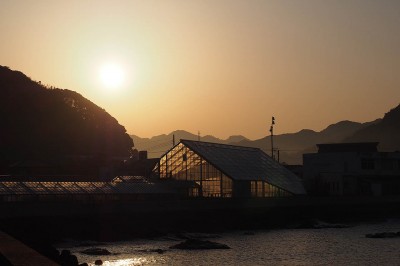 Sunrise. Did not want to see this..

Since I couldn't sleep any more, I hung around in my tent until 4AM-ish, at which time it started to get lighter. The timezone is really fucked up in Japan if the first light happens at 4AM and the last light is at 6PM. Just move the damn timezone up 3 hours already, ffs. Anyway, I packed all my stuff, but the tent was still wet with moisture because it was still so early. I didn't want to spend another second next to those assholes though, so I left as soon as I could. And farted in their general direction.

I had to wait another hour at the ferry terminal to catch the first ferry to Kanagawa, and was having difficulty staying awake. I somehow managed though, even throughout the 40-minute ferry ride. When the ship arrived in Kurihama you could hardly see a thing. It was an incredibly dense fog, which (fortunately for me) dissipated in the hour after I started cycling. There was a person who was slightly more overweight than me on a racing bike, who had been on the ferry too and was heading in the same direction. I followed him for a good 10-15 kilometres. He'd get slightly away from me on the flats, but would hold back on the downhill giving me a chance to catch up. When a steep uphill appeared I thought I'd lose for sure, but he went extremely slow and eventually had to pull over. I whizzed past him with my smug face on. WIN! I later raced another fatty on a racing bike on the flat road to Hiratsuka and was able to keep up with him, although not overtake him. Good exercise :D. 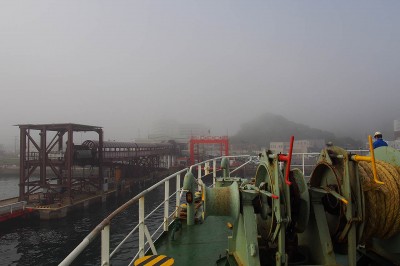 After reaching Kamakura the fog had returned, and was very peculiar indeed. In some areas there was the full blazing sun making it hot, but some of the foggy bits were as dense as an actual rain cloud, and a lot colder than everywhere else. I've experienced cycling through clouds before, but never at sea level. Sadly this cloudage prevented me from seeing Enoshima altogether; I couldn't even see halfway down the bridge to the island. Oh well. I headed there anyway and took a break under some trees. The amount of people at Enoshima on a Saturday is just plain disgusting. Way too crowded, much like all the rest of route 134. It's oddly full of white people on this road, more so than anywhere else I've been. Can't say that's a good thing.

Since I was at most 2 hours away from Atsugi and it was way too early to check into my hotel, I consulted the Google and found the nearest Sukiya, which as it turns out wasn't too far off my route. But when I arrived I was shocked to find out that it was closed for refurbishing. Noooooo. I cycled on and found some other, far more inadequate, restaurant to spend some time in, and nearly fell asleep again. Then, having reached familiar territory, I put on some loud music to keep me awake and adrenalized my way to Hiratsuka. 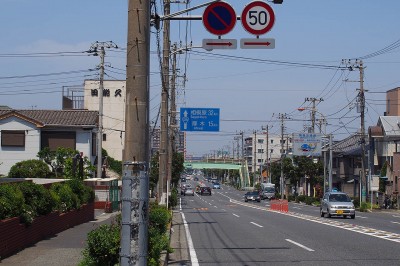 My all-time favorite road. I love it.

I was worried I'd fall asleep and lose my concentration for the last part into Atsugi, but the opposite was true. Seeing that awesomely nostalgic road that I've cycled over a hundred times just refueled me with infinite energy. It's a beautiful combination: sleep deprivation, nostalgia, excitement, adrenaline and exhaustion. I went slowly and took the riverside road, taking photos along the way. 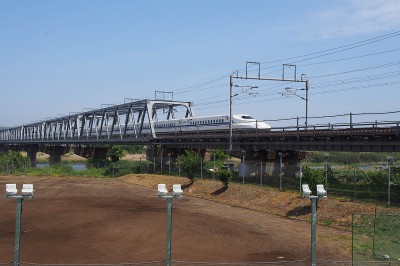 When crossing the Shinkansen tracks there's a very low bridge that I could always just fit under if I put my head close to my handlebars and ducked down a lot. It was only when I was too close to stop that I realized that my new frame is a lot bigger than the old one, and I nearly sprained my neck trying to make myself even lower. But it worked! 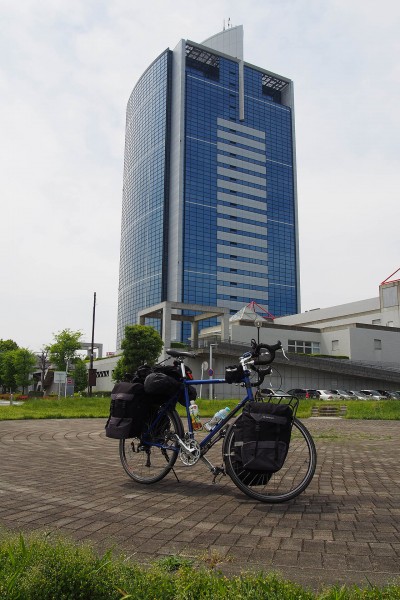 In Atsugi I zigzagged around a bit, paid my respects to the big tower of money and had lunch at Sukiya. Then I checked in to the hotel, had a shower and slept until well into the evening. Finally, rest. 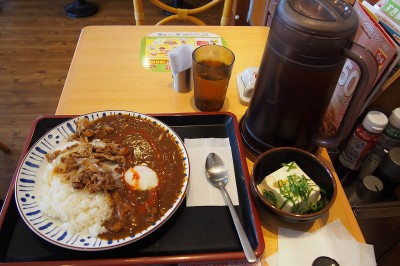 Best meal ever is the BEST MEAL EVER.
Posted in Spirit of Japan 2