Today I had exactly one goal: to prove myself right in choosing the road via Kusatsu by making it to the 'other' side of Japan, past the Japanese alps. I could have gone to Nagano from Karuizawa, which would have been easier, but I chose the scenic route. I had to suffer for it, but damn, it was absolutely worth it. I have never in my life cycled on such a scenic route, nor have I ever cycled this high up. What a great day. Going this way was the best decision I've ever made. 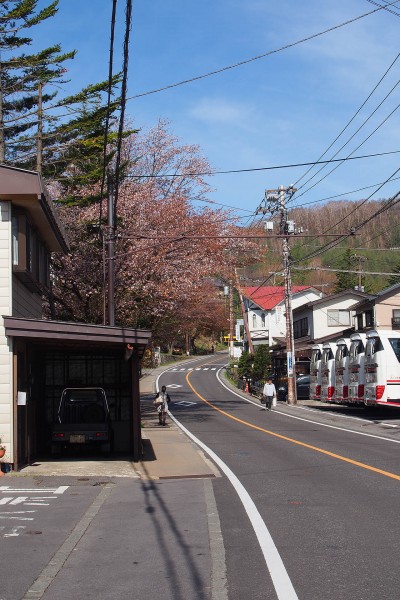 There's so much to tell. I woke up at 6:30 ish, not too cold thanks to the down sleeping bag I'm using (best invention ever!). It takes me about an hour to pack everything up and get ready to cycle. Luckily for me the day started and ended without a cloud in the sky, so I was able to dry my tent and sleeping bag in the sun before packing it. The sleeping bag does get a bit moist overnight, but it's quite manageable.

I stopped off at a conbini to buy some breads, as all of the bloody onsen tourists had bought all the onigiri already. I also bought a frozen drink; one of my absolute favorite things in Japan. You buy a frozen sports drinks or green tea and let it thaw out slowly, providing you with a constant refreshment of coolness. You can mix in another drink for extra great effect. Turns out that frozen drinks aren't a brilliant idea if you're heading out into the cold though, since it takes forever to thaw out..

I'd just gotten 500 meters away from the conbini and started climbing when some random guy in a car started shouting hello at me. He even pulled over and got out of the car to stop me. Turns out he just wanted to have a chat since he was also interested in cycling and had cycled before in Europe. He then gave me 500 yen to buy drinks with which I failed to refuse (I tried!). Good start!

Another thing I did differently from yesterday is that I put my music on. I can't remember my reasoning for not listening to music while going uphill, but having music on definitely makes it a lot easier. It's easier to grab on to something to keep your pace while you're listening to music, whereas if there's nothing then you're just looking for the next point where you can give up. Or maybe that's just me.

I made really great progress and managed to climb significantly faster (at least for my own personal standards) than yesterday. Surprisingly, there's snow! Snowy patches first started showing in the shade under trees and bushes but eventually there was snow everywhere. I didn't realize there'd be this much snow in May. It wasn't even that cold, fortunately. 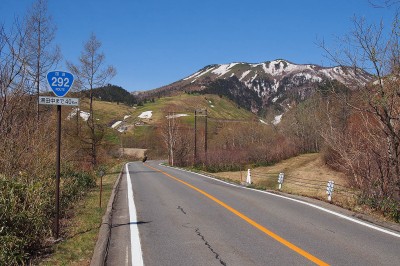 The scenery on the way to the top was just amazing and impossible to describe in words. I had plenty of time to take it all in while out of breath at the side of the road, which provided the perfect opportunity to take photos. It's really nice doing a road like this on a bicycle. If you're in a car then you can only stop at certain points to take photos, and if you're walking it'll take you forever. 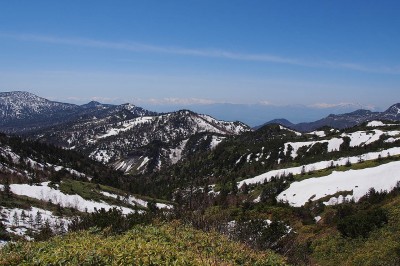 Eventually I made it to what I thought was the top. A volcanic crater lake that was unfortunately off-limits, and a beautiful frozen-over lake on the other side of the road. I posed for photos with some silly people who were flabbergasted at the amount of luggage I was carrying, and then went in for a lovely warm meal in the ski restaurant.  Before setting off again I adjusted my brakes to be a lot tighter, since it was only downhill from there. 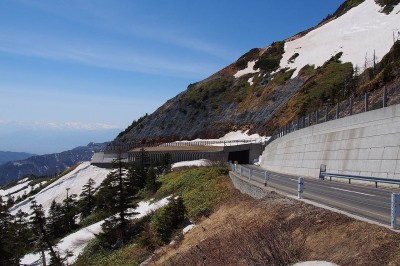 ..or so I thought. I had to climb nearly 200 meters more to get to the actual top. It was steep and very slow going, but I made it somehow. I've been trying to keep my cadence around 48-50rpm while climbing. I used to prefer a lower cadence but that was before the inclines increased beyond 10%.. It's still doable in low cadence, but I've got very little leeway to go even lower since it'll halt my bike and sway me in front of a car. Higher cadence is possible, but tends to wear me out too quickly, so around 50 seems to be perfect. Then all I have to do is set the gear to whichever gear just barely doesn't wear my muscles out. It's very tricky business, this sustainable climbing stuff..

The downhill was a lot less enjoyable than I had imagined it would be. Instead of a free coast all the way down I had to press the brakes constantly to prevent myself from overspeeding. It really hurt my hands, and my ears, because my front brakes squeaked insanely loudly all the way down. There was nothing I could do to stop it either, short of completely replacing them with the spares I was carrying, but the braking power was still fine, so I kept them on.

Just after beginning the downhill I put my hat away and put on my cycling glasses to prevent bugs from splashing in my eyes. They always seek out my eyes, those bastards. But I had to take the glasses off 5 minutes later as I suddenly became quite nauseous. They seem to distort everything and somehow made me feel as if I was way taller than I actually was. Continuing with glasses would have been dangerous because it seriously fucked up my depth perception. Not too bad because I couldn't go fast anyway, due to the squeaky brakes and general safety.

About halfway down the road suddenly turned into a brief steep uphill again, and when I shifted down to a suitable gear, my chain fell off. Sigh. I couldn't flip it on easily either so had to pull over and do it manually. Also on the way down the speed sensor kept malfunctioning, and I had to adjust it 3 times to get the right distance between magnet and sensor. The right distance seems to be 1mm, since anything more than that and it won't register, anything less than that and it'll hit the wheel and force you to adjust it again. Not a brilliant system. I'd happily just disable it and rely on gps measurements for speed, if I could. Thanks, Garmin.

Some of today's bits were little connection-y roads between two mountains, with steep cliffs on either side of the road. Those bits, and also the incredibly steep bits of road that seem to go off into the sky can give you a real sense of vertigo. Good thing I'm only slightly afraid of heights, because I've seen some things today that could be seriously scary. The road bits between two mountains were doubly scary because of the strong crosswinds and low guardrails. The guardrails are fine for cars but if you're on a tall bicycle it's easy to imagine yourself falling over it and down the cliff. All very good reasons to keep your speed down. 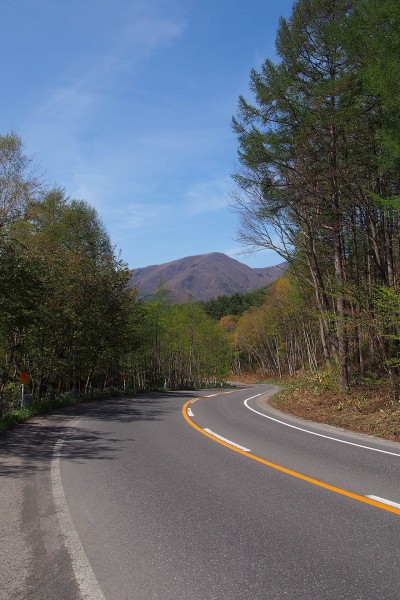 On the way down I passed many ski slopes, some of which were still in service and had people skiing on them, but eventually the snow started to disappear again and I made it down. As I got lower and lower the temperature shot up and the wind started to feel like a blow dryer blowing on my face. Back to summer! I reached Yudanaka without any troubles, inquired at the tourist info for cheap hotels and then had to cycle back up a bit to find a rather decent hostel. It's quirky, which I think is the norm for cheap hotels around here. But it's also very nice and very cozy. I like it. They also have an onsen :D.

I made it. Three days that I knew were going to be incredibly tough on me. Pre-discovering camp sites before setting off helped ease my anxiety of being in the middle of nowhere without a place to stay. It's all fun and games if you haven't got a hotel but can cycle 10km in any direction to find some place to camp, but you can't do that if you're in the mountains, since it would wear you down horribly and simply because there's no space left. I'm in the right mood now. I can set off without worry, knowing that I've done this. I am capable of doing ridiculous things on a bicycle while looking extremely uncool. That is my special skill. With that as a given, there is no place I cannot go.