I almost stayed in Akita today but frustration made me go out and cycle in the rain. It was a great reminder about how much I do not like to cycle in the rain. Cycling in the rain sucks. Don't do it. You get all kinds of crap in your chain and on your bags and it ruins your bike. 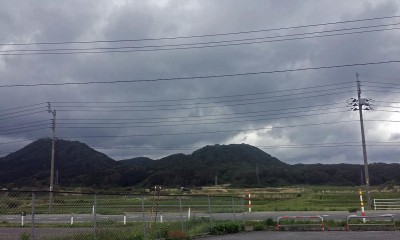 Today was a strange day, really. As is usual on cloudy days, I was very unmotivated in the morning. It didn't help much that there was quite a bit of rain and strong winds as well. My way of dealing with adversity is very simple: pop in some ear buds and listen to Eurobeat while cycling. Eurobeat is incredibly dumb but also incredibly effective. It helps me to keep my mind in that active state, rather than a 'give up' state. If the effect is not strong enough, just turn the volume up. I needed quite a lot of volume today, but it was super effective. When I finally came out of my Eurobeat-induced trance I could see the end of the dark rain clouds, and the rain had stopped. Eurobeat converts physical energy into mental energy.

Before setting off I marked several camp sites on my offline map, and the last conbini I would encounter before civilization ends. I sort of assumed that I wouldn't encounter much things today and that there wouldn't be much of anything anywhere, but I was quite wrong. All the areas I cycled through today were fairly built up and I even encountered a respectable city on the way. I didn't even get as far as the desolate coastal road that I was expecting to do today. Instead, I traveled across a massive plane of utter flatness, with insanely strong winds. No sudden gusts this time, just a constant wind blowing me right in the face. It slowed my progress down to a crawl, from 25kph to 16kph. It also made me sweat like crazy because of the effort required to go forward, and at the same time chilled me down a lot by supercooling my sweat. Just.. fuck you, weather. At least it stopped raining after an hour or so and the rest of the day was dry, so I got that going for me, which is nice.

When lunch time came around things started to become a bit more desolate, so I decided to not take any chances and have a quick conbini lunch on the assumption that there wouldn't be much else later in the day. But less than a kilometer after my crappy conbini bento I crossed a major road that was full of shops and things, including a Sukiya! Gaaaaaah... What a failure. I could've had a very nice lunch instead..

As I neared the actual desolate mountain road that I was expecting to cycle on today, some friendly dark rain clouds appeared to great me. They were just hanging out around the mountains, unable to go further, so they decided to let it all out right there. In all honesty, I could have cycled further. I could have done another 30km to reach the first camp site and I could have put up my tent in the rain, after which I'd have to hide in it because I'd be in the middle of nowhere and there's nothing to do. Then I could have tried to go to sleep despite the massive winds that would be tugging on my tent. But then I noticed a hotel on the side of the road and I thought: "yes".

It's a lovely hotel too. A bit over my normal budget, but who cares really. It has an authentic onsen bath which was absolutely lovely, and although I told them I didn't want any meals, when I came out of the onsen the receptionist ran up to me, told me to wait 3 minutes, and then came back with a plate of rice and a bowl of soup. So nice! This hotel is great.

I am not happy with my current mindset. Despite having cycled 80 kilometers today, I still feel like a failure because I'm not camping, because I spent money on a hotel and because I could have cycled on longer and/or in the rain. I don't know why I feel the need to punish myself so much on a trip that is supposed to be for fun. Mental defect? I also think I'm punishing myself because I'm away from my girlfriend for a long time, which is not a nice thing to do to her, so I feel like I should punish myself for that. At least I'm aware of it now, so I can assign it the appropriate weight. Nothing is stopping me from enjoying this trip, except for myself.

Tomorrow will be sunny again.