What a stark contrast to yesterday. When I left Iwamizawa the sun was out in full force, there was hardly any wind and also hardly any traffic. I put on some music, dressed appropriately to stay at a comfortable temperature and started my journey towards Asahikawa. 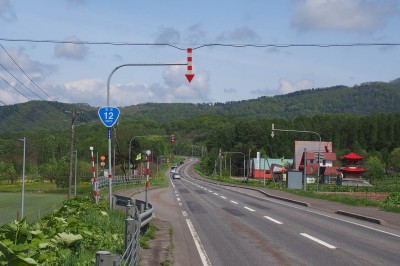 The road was not bad at all today. Route 12 provided some nice views of rice fields and mountains in the distance. Somehow the grass level got less and now there's more rice fields again. Oh well, all the better. Add in some bridges, wide roads with plenty of room for cyclists and today's ride was pretty damn good. Only exception to this was an hour-long period before lunch when clouds appeared briefly and the wind really picked up. That slowed and cooled me down a fair bit, but after lunch things returned back to brilliant again. 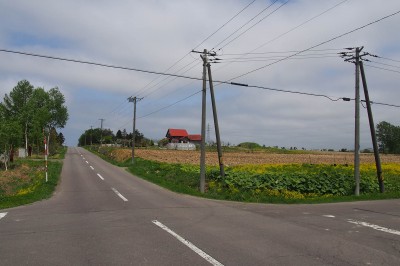 I thought I saw an old friend this morning! The Chinese dude I met 4 years ago while cycling around Japan, who was traveling around in a self-built camper van. I saw a camper van that looked exactly like his go past me, and since it's self-built, there's really not many like it. I waved and shouted at it but he just drove on, too fast for me to catch up. I don't have his contact information either so I guess we'll never know if it was him. Oh well.

After lunch I hopped back onto route 12, which followed the majestic river into the city. Soon a tunnel appeared, and a smaller road that went off to the side that looked like it went around. I went on to the smaller road and suddenly found myself face to face with four gaijins! It turns out they were English teachers living in Asahikawa for many a decade. It was very good to talk to people in real life, in English, for a while. They were all very familiar with the territory and provided me with some great wisdom on cycling routes. It turns out I chose the most boring way to get north, as either coast would have been more scenic. Oh well, I had good reason to avoid coastlines after many a day in Honshu and the south of Hokkaido, but I'm planning to head to the coast again before reaching Wakkanai.

They also instilled new confidence in me about camping. Hokkaido is quite empty, and apparently nobody really minds if you camp near a riverside somewhere. It's information I kind of already knew, since I've done plenty of riverside camping in Honshu on previous trips, but hearing it from someone else gave me a good confidence boost. Thanks for the extra push, guys.

The remainder of the road into Asahikawa followed the river, but split off from the car road and became a dedicated cycling path. It was an excellent route with excellent weather: quite possibly the best cycling experience I've had in Hokkaido. I must seek out more of these roads. 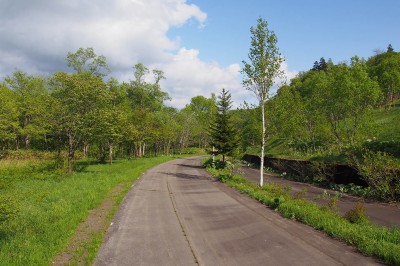 On that note, I've decided not to push too hard to get to Wakkanai in 3 days. I've got time to make detours, and with my newfound confidence in camping I should be able to do some more discovering along the way. Hopefully the weather will hold up..