(Written on the morning of the 12th, set to autopublish on the 15th)

The truth is, after the cold but refreshing downhill from the last post, either before or after I went to the temple, I forget, I got a strange idea in my head and I couldn't let it go. It just kept sitting there and wouldn't move, and forced me to think about it. In my mind I imagined the steps I would need to take and the consequences it would have if it went either right or wrong. In the end, I figured it was worth doing a little investigating in real life to see if it was possible. After all, I still had plenty of time left in the day.

I decided to see if I could change my flight and go home early.

Why? Mainly because I wasn't really enjoying myself any more. I've got the "cycling in Japan" theme nailed. I can look at a map now and know exactly what kind of road I'll encounter. When I enter a new town I'll know exactly where the station is, where the hotels are, where the conbinis are, without even looking at a map. Everything is just hugely predictable, and, finally, unchallenging. I just am no longer getting out of these cycling trips what I was getting all those years ago when I first started.

Besides that main reason, two additional reasons that caused me to feel this way are that 1. this trip was pre-planned, and 2. it is genuinely cold and unpleasant outside if you're sweating like mad, which makes the random wandering-around kind of a non-thing for me. If your clothes are wet with sweat and there's a cold wind chilling you down then you don't feel like casually cycling around to see what's out there, you just want to get to a warm place as soon as possible. The pre-planned bit meant that I already knew exactly where I was going, and I knew that yesterday was both the most difficult and the most beautiful route of the trip, so the challenge kind of disappeared after that.

So, at Sukiya I put the first part of my plan into action: check if I can actually change the date on my return flight. I managed to check on my mobile phone on the wifi from the conbini next door. I could indeed change my flight! I didn't change it just yet, though.

I am 200 kilometers away from the airport. I needed to check how I would get back there if I'm not cycling back. The train would take me back there in a day, but as I expected and confirmed after checking, it would take quite a few transfers, and either a very long time or a little trip on the Shinkansen. I've learned from experience that the last thing I want to do is haul an ultra-heavy bike bag around from train to train, walking from platform to platform, going up and down stairs, passing through heavily populated stations.. That is something that would make for a very miserable day for me, so I preferred to avoid that option.

My preferred option, which I've used once before on a previous trip, is to bag the bike and send it via the Yamato Kuroneko delivery service straight to the airport. Kuroneko, for me at least, is not a sure bet. I do not have absolute confidence that they'll accept my bike as bagged, that they'll deliver it to the airport on time, and that they'll deliver it at a reasonable price. Everything changes when it comes to bikes. No one knows how to deal with it. To be fair, I've never had negative experiences with Kuroneko, but if I mess this up I'll lose my bicycle, so I needed to be absolutely sure that it was possible.

So I held off on changing my flight and first cycled onwards to Kochi, where I found a Kuroneko facility. A clueless guy tried to help me but gave up almost immediately and passed me on to a very helpful lady, who provided me with all the details I needed. It was indeed possible, could be delivered within 3 days if I gave the bike bag to them today, and although she didn't say directly I inferred that she wouldn't charge me an insane amount of money.

This was around 16:00/16:30, and I still hadn't changed my flight. So I excused myself from the Kuroneko and immediately went to the nearby conbini to get wifi so I could change my flight. I had to present my bike them before closing time at 18:30 so I was suddenly very rushed. But of all the luck in the world, in a giant city, this conbini did not have wifi! So I cycled onwards towards the station and the center in the hopes of finding a conbini, warcycling to find wifi. Not too far away I managed to find a Joyfull family restaurant which had an open wifi, so I hopped onto my phone to change the reservation. I could still make it.

But then the website broke! The Cathay Pacific site was very mobile-friendly, very easy to use and walked me right to the final step of changing the dates on my return flight, but then it errored saying I didn't put dates for my departure flight. Well, no shit, I already took that flight, can't change it now. I hoped it was perhaps a mobile site issue, so I grabbed my laptop and, in the parking lot of a family restaurant, tried to change my booking on my laptop. Again, no luck. 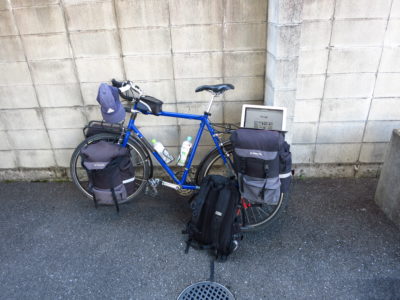 This was a good point to give up. I could simply cycle back to my hotel, never see Kuroneko again and continue on with the rest of the trip. But I felt annoyed that the Cathay site wouldn't let me change my booking even though it clearly allowed it, so I called them up. Still from the family restaurant parking lot. With my laptop resting on my bike. I connected immediately and the guy I spoke to helped me in record time to change my booking with no issues whatsoever. Excellent customer service. I'm flying back on the 14th.

Then I cycled, quite hurriedly, back to the Kuroneko building, where I started to take my bicycle apart. I'm getting better at this every time, but the rushed-ness of the situation caused me to dirty myself quite a lot. I sprayed a lot of chainspray on that chain in the morning, and it was making marks everywhere. I didn't do nearly as good of a job bagging it as on the way in, but hey, whatever. I'm going home. The friendly lady was still there and accepted my bike without issue, and only charged me 4400 yen. I'm pretty sure that the last time I used them the price was at least double. She also didn't check the weight. Perhaps they changed their policy, or I was overcharged last time, or it's just that the distance is less this time. In any case, I'm not complaining. 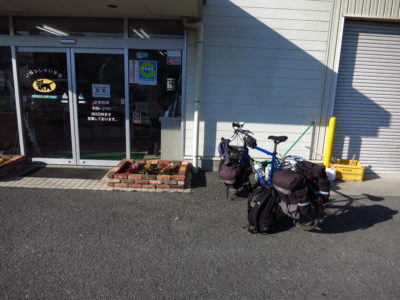 The sense of relief I got when my bike was finally accepted was amazing. I had a very good walk along various canals on the way back to my hotel, finally realizing what I had done. This trip started out as an impulsive thought made reality in only a day, and now I had undone the entire trip, also on an impulsive thought, also in only a day. That's probably not a good thing. Then again, the best way to learn is by making mistakes. At least, that's how I rationalized it as I was walking the many kilometers to the incredibly sleazy love hotel I wrote about last time.

I wasn't done yet though. I still had to cancel all my reservations and book a hotel for the next two nights. I managed to change my existing booking for the airport hotel and even ended up a little bit cheaper. All other hotels had free cancellation except one, and that one was kind enough to waive the fee. I've mentioned before how booking.com is fantastic, but it really is worth saying again. Everything can be done through the website and I was done with the whole process in only a few minutes. Way better than calling up hotel after hotel to get it done.

As of the moment of writing I am still in the love hotel. The door made a noise at midnight which scared the crap out of me because I thought it was going to unlock the room and let some random couple come in, but everything was quiet throughout the night. I never did manage to find out how to turn the lights off, though. What an inconvenient place.

I'm about to check out and head over to the station, where I'll take all those trains back to the airport. My plan is to stop over at Osaka on the way and buy some new noise-cancelling earphones, because I lost the rubbery bit on one of the earphones on my old ones, and I think it's time for something better anyway. No plans for tomorrow yet, but I think I'll go on walkabout somewhere and take some random photos. 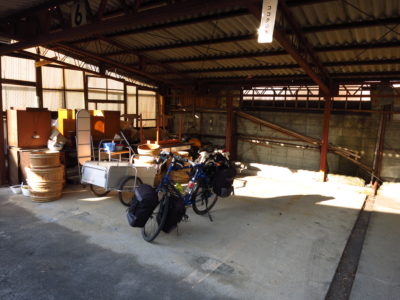 I think I'm done with cycling trips for a while. At least until I find adequate motivation to do another one.