I don't feel like wasting words today, so I'll get straight to the point: life is exceedingly limited if you don't have a car.

These are excuses I've used in the past to justify my not having a car:

The last is perhaps not exactly an excuse, but more of a consequence. People with cars go to different places than people without cars. There's some overlap between places, but in the end you're severely limiting your options if you don't have a car.

Here's what you can't do (or can only do less comfortably) without a car:

It is possible to live without a car. But you'll limit the places available to you. You can still go anywhere, and even if you pay for public transport and/or taxis, you 'll probably end up being cheaper off than by owning a car. Money is not the issue, time spent in/outside of your comfort zone is. This is why a car, still, even in car-unfriendly countries, is freedom. 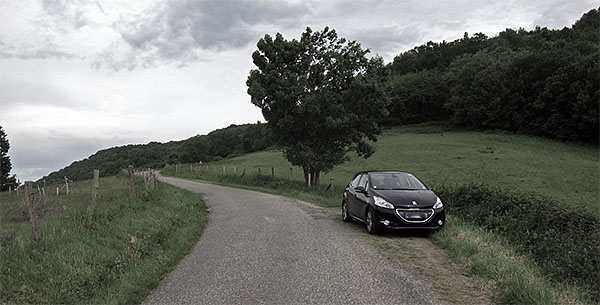 Perhaps a bit unusual for this blog, but I felt like recording my experiences in driving the Peugeot 208. Last weekend my girlfriend and I went to France for a trip in the Pyrenees. We rented the cheapest model from Europcar, but since none of the cheap cars were available they kindly let us drive a Peugeot 208 instead. The twisty mountain roads in the Pyrenees provided ample opportunity to give it a good test drive.

My first impression: yet another nondescript French car. Both from the outside and on the inside it looks like any average European car manufactured in the last 10 years. Nothing at all stands out or is out of the ordinary. Except perhaps the gear stick, which just felt.. wrong, somehow. It was comfortable enough to use but it didn't feel like a proper gear stick. Too much plastic-y chrome, not enough leather. The GPS was easy enough to use and the center console screen was pleasantly large. Switching the French GPS into English mode provided much amusement with the French-accented guidance voice.

The engine of our rental car was petrol, but I failed to find out which one. According to the Peugeot website the 1.2VTi has 85 horsepower, whereas the 1.6 has 120HP. Our car felt quite responsive and didn't have any trouble at all climbing up hills, so I suspect we may have had the 1.6. The engine felt responsive and had a sound that lies somewhere between average and decent. The gearbox has a slightly higher first and second gear compared to most other cars I've driven.

Driving the car feels awkward. The steering and braking are extremely responsive, so it's easy to overdo it and drive in a very digital, on/off kind of way, rather than smooth and analog. Or, as my girlfriend described it when she drove it for the first time: "This car makes me sick".

The way the car handles is quite direct. The suspension lets you feel the road reasonably well, but the steering is so power-assisted that it feels rather dead, which perhaps also contributes to the feeling of nausea, as you don't get a lot of feedback from your actions.

Other stuff: boot size is average, fuel consumption is average (maybe even good, I didn't measure it very well), seats are average, dashboard is average, steering wheel buttons are average, navigation is average. Visibility is a bit less than average because of the tiny rear windshield when looking behind. The big rear-view mirror and thick front pillars block your view when you try to look left and right.

I wouldn't buy a Peugeot 208 myself. Of the cars I've driven that could be alternatives to a 208, I'd go for the Suzuki Swift 4x4 which I've driven in Iceland, a fun car with lots of character. The 208 on the other hand is just average. And when it comes to average, there's better alternatives from Germany or Japan.