Google Earth is amazing! I was mapping the route we cycled in Sicily and found out it has a built-in altitude display that shows the exact elevation of a path. All you have to do is right-click the path and click 'Show Elevation Profile'. I love Google Earth. Here's the route we did, and here is the kmz file you can use to view the path in Google Earth.

Here's two panoramas I shot while cycling. I really loved the scenery of Sicily. It reminded me of Gladiator :D

You can see Kamil and Tim cycling on the bridge in the second photo. There were several of these bridges. They were all very very tall and the guardrails were very very low.

Alright, so it's been over a week now and I still haven't really blogged about the trip (except for the liveblogging). I've pretty much cooled down so much that I only have a handful of things to say about it. Let's start with an imagedump: Sicily part one, two and three.

Sicily was just awesome. I was expecting to see beautiful landscapes, and I got them. It's truly a great place to cycle around in, especially the countryside. The urban area around Palermo wasn't too bad, although we had to do a 400m climb just to get to the coastline because the only other road was a highway. That's still a lot better than Catania, for which the only road going south was the highway.

Speaking of Catania, I would like to mention how much it sucked for cycling. The trip from the airport to the city center took us through the most dodgy areas I have ever cycled in, and it did look very very slummy. This coming from a guy who loved the city center of Catania and pretty much every other bit of Sicily. It doesn't help that we had to cycle on the bloody highway to get to Augusta, the next big town south of Catania. We encountered an alternate route, which was already on the map, but hadn't been completely built yet. That was a 10km detour. Besides that incident we encountered a lot of examples or modern architecture, road network design and other things like that which just made me think: Italians suck at building things.

The people of Sicily were extremely nice! They were all very friendly and we usually managed to convey our thoughts, despite our obvious dismastery of the language. Interacting with Sicilians is quite fun. Informal, sometimes random, sometimes impunctual, all in all very un-northern-european :D The Sicilian personality shines through in traffic as well, although busy cities like Palermo and Catania are quite different from the countryside. As usual, I prefer the countryside, although I remember my travelmates saying they liked being back in the city when we arrived at Palermo.

Have I mentioned the food? Because it was great. Every little thing I ate in Sicily was blessed with a very strong flavor. Everything just tasted... stronger, than in Holland. I still remember the delicious food we had at an olive farm one night. So delicious. It wasn't too expensive either, and neither were the hotels. The 3 of us could usually get a bed at a B&B or hostel for under 25€ each. I should note that we didn't camp at all, so I can't comment on how easy it is to find camping places or other places to pitch your tent.

The thing that I remember most about the trip though, is the cycling. The feeling of waking up in one town, cycling the whole day and then ending up in another town. That's the real essence of touring cycling. It's such a great feeling to cycle one-way only. It's been in a year since I had that feeling, and I'm glad I found it again. I started out really weak, but as we climbed more and more hills my leg muscles found back the strength from last year, and finally during the last few days of the trip I was able to enjoy the tough bits again. All this cycling inspired me to go on a cycling trip again this summer. I'll probably cycle back from London to Groningen, but I might make a few detours along the way. A plan is slowly forming in my head..

So, to summarize: Sicily: bloody great! Highly recommended and well worth a visit.

Well, it shows more asphalt than Sicily, but you get the idea. There's also the full 9min+ version, but you will quickly grow tired of my foot nearly kicking the camera about 20000 times.

Our homecoming did not go well. Everything that could possibly go wrong, did go wrong.

The first thing I should mention is the organization that is responsible for our horrible evening: Alitalia is the worst airline ever. When checking in they tried to make us pay extra for the bicycles, even though we already confirmed 3 times by phone and in person that we didn't need to pay extra if we only checked in the bicycles and not anything else. But this is not because Alitalia are trying to scam us, it's just that they're idiots. After weighing the bicycles a random security guy from Palermo airport showed up and took our bicycles to the security checkpoint. That is: dragged the bicycle bags over the floor in a rather devastating way. Carelessness is the word that best describes Alitalia.

Upon arrival in the UK all three of us were giddy to get home, and we decided to assemble the bikes at the airport, since it's only a short ride home. That's when we first noticed how Alitalia treated our bikes. There were holes everywhere in our (expensive!) bicycle bags. Very very bad. While assembling the bikes there were some major pieces completely broken. Kamil's gear wires were completely messed up and Tim's frame was so bent that the rear wheel could not possible fit, making his bike unfixable for the time being. Since Tim had to get back to Oxford I let him use my bike, which was in surprisingly good state (albeit dirty as hell). Kamil managed to fix his bike so he went with Tim to the train station, which is next to Kamil's place. He would pick up his car and then drive to the airport to pick me up, as well as the broken bicycle, and all the luggage that was still with me: a whopping 8 panniers, 2 bicycle racks and a bunch of heavy camping stuff.

About 20 minutes after Kamil started cycling I realized that I still had his car keys in my backpack. Suffice to say we were both not very happy. I'm usually the guy who remembers where things are, reminding people not to forget things. This time I forgot too. Kamil took a lot longer than expected to cycle home, so I (very, extremely) grudgingly agreed to somehow carry 3 people's worth of luggage onto the train. This was an extremely frustrating endeavour. I had to transfer once, and carry the damn luggage all the way from one end of the platform to the next. I have not in a very long time been so pissed off. Nobody dared approach me at the platform because I looked like I would throw them in front of the train if they dared speak a word to me. I waited for 30 fucking minutes until the right train finally arrived.

Finally I did arrive at the right train station, and Kamil was there waiting for me, just as pissed off as I was, and a lot colder. He'd been waiting outside at the train station for 30 minutes, trying to avoid drunk black people and other shady characters. Carrying the super-heavy luggage up the stairs was quite a challenge. Having to pass several more shady looking characters did not make things any easier, but my face was set on war mode, and nobody approached us. We finally managed to drag the stuff up to Kamil's place, but what a horrible experience it was. For me it was definitely the worst ending of all trips I ever did, ever. And none of it would have happened if Alitalia had just been a bit more careful with our bicycles..

On the bright side, Sicily was absolutely fantastic. It's such a beautiful island, and the people are great. I'll blog more about that later, when I get the photos and the notes sorted. Right now I really need some sleep..

I will miss Sicily... 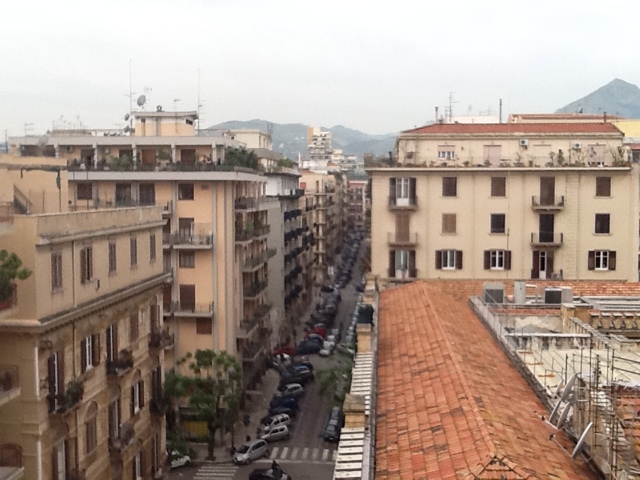 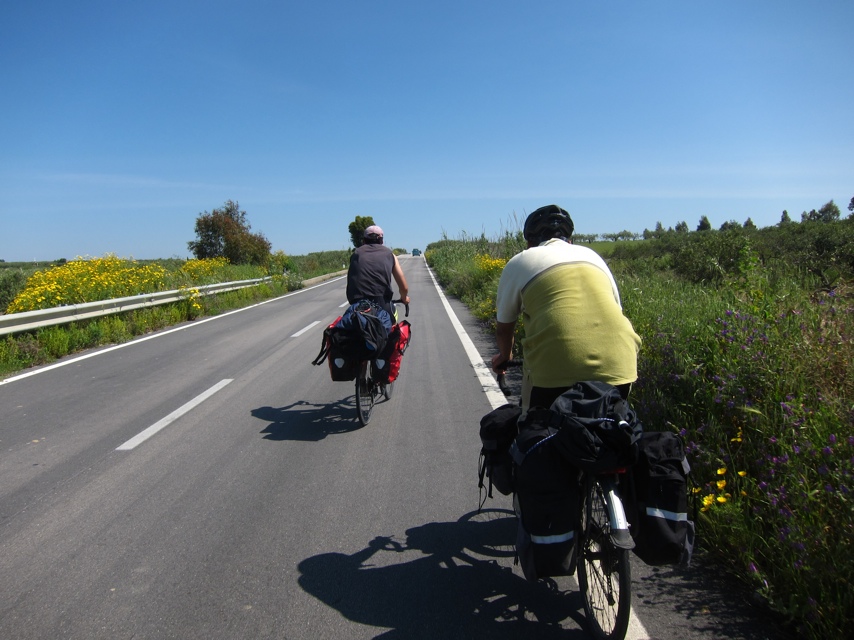 We've arrived in Palermo! It was a tougher ride than we expected today, but very satisfying. I'll comment on Palermo later but let's just say I much prefer the beautiful Sicilian countryside. My muscles seem to remember the trip from last year, and I'm finally gaining speed on the uphills. On the downside, I put so much force on the chain that it's now skipping. It started skipping just minutes before we reached our final resting place. I'm slightly sad that my trusty partner had no life left in it. I hope I can fix it...

Also, this is a message to all Sicilian drivers: DO NOT FUCKING HONK YOUR HORN AT US ALL THE TIME! I appreciate the sentiment of saying hello and wanting to cheer us on, but it can be extremely distracting and downright dangerous. I remember one time we were going very slowly up a steep slope and a car decided to honk when it was right behind us, presumably to warn us that a car was coming because the road was not very wide. Not only was the honking useless because we already heard the car coming from miles away, it disrupted our concentration which made us zigzag even more, creating a rather dangerous situation. On another instance there was a long flat road with perfect visibility, yet a car decided to loudly honk just as it was passing us. That's not funny, that's just annoying.

Arrived on the north coast!

Very sleepy now, so more later. The ride through the mountains was less difficult than we thought, and took us through some extremely beautiful areas of Sicily. Will post some photos as soon as I get back. One more day until Palermo, and then we're flying back on Monday. Tme goes by so quickly. I want to do more cycling... 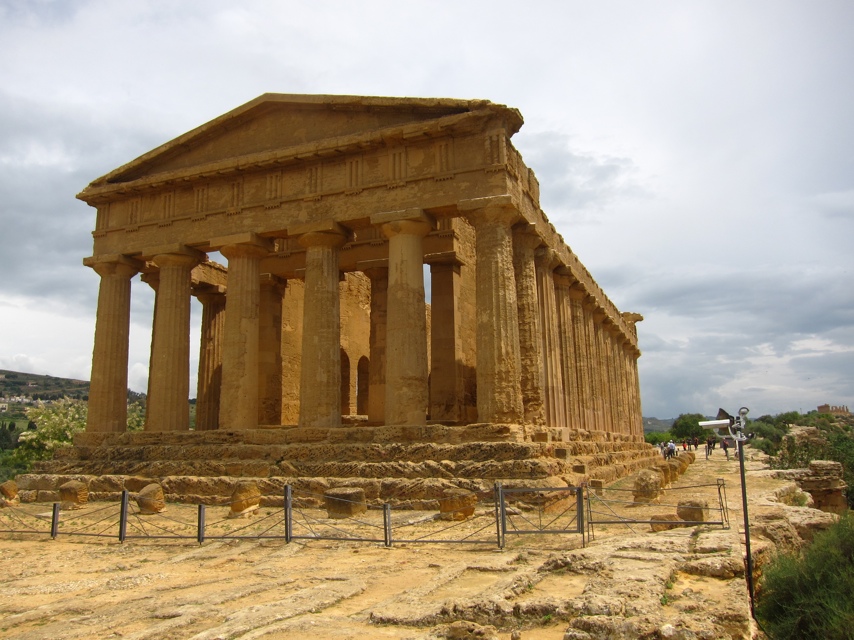 We arrived in agrigento yesterday after a tough 100+km bike ride through the rain, and a horrible uphill just to get up to agrigento. Today we took a break from cycling and explored the vallei dei templi, a world heritage site of astounding beauty and historical value. Tomorrow we're heading out westward along the coast, and the day after we'll head inland to get to Palermo in time to catch our flight home. A tough couple of days lie ahead..