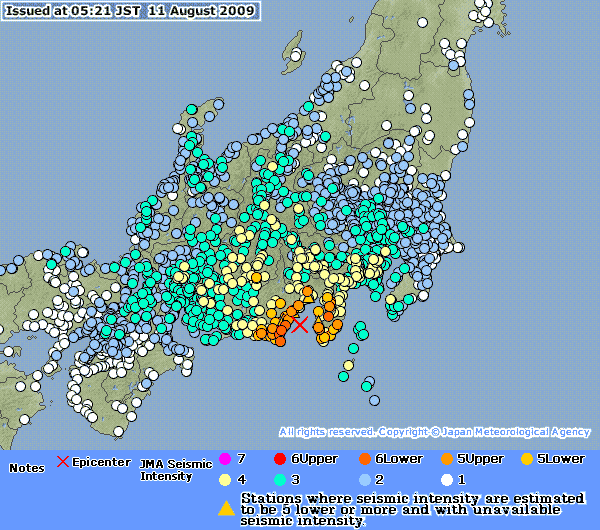 Just when I thought I experienced the worst earthquake in my life, another earthquake happens one day later that is even heavier. For comparison, below is the chart of last Sunday's earthquake. Thanks to the Japan Meteorological Agency for providing the images. Note that the scale is not the richter scale. It seems that level 4 on the Japanese scale corresponds to about 7 on the richter scale, though I'm not quite sure. 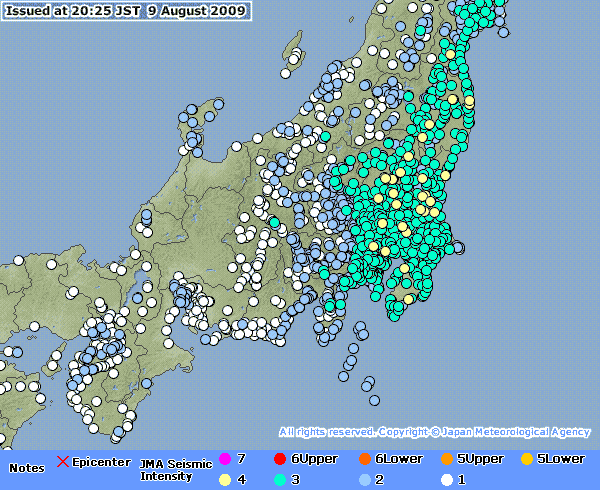 As a Dutch being I have never experienced a heavy earthquake, and this was quite the experience for me. I think I was awake at 05:15 before the earthquake hit. I always notice earthquakes first by the hanging lamp in the center of my room, which starts to make rotating movements. Shortly after that the shaking becomes noticeable and the room starts to shake back and forth, or in a circular motion. Usually this goes on for anything between 10 and 30 seconds and then subsides, but during the last two quakes the shaking only got worse and worse and lasted well over a minute!

So at some point during the shaking there comes this moment where you have to decide whether this quake is serious enough to warrant walking/running downstairs to safety, or to go back to sleep. I guess the tipping point is different for everyone, with foreigners like me running the hell out of the potentially collapsing building noticeably sooner than all Japanese people..

Well, there's been two heavy earthquakes in the past two days. A ty is approaching and a possible tsunami as well. Looks like disaster season is well underway. All we need now is another great Kanto earthquake and an eruption of mount Fuji. Business as usual in Japan.