Today was a day that did not go according to plan. It went better than planned. Much better.

From Tsuruga about halfway to Kanazawa. That was the plan for today. I had intended to cycle along the coast for about half the day and then turn in to a mountain road that veered off towards the city of Fukui, inbetween two mountain ranges. The reason I planned it that way is because of trauma from the 'coastal' roads after Tottori, which were just utter shite really. Way too steep, way too zigzaggy, and nothing useful in ways of facilities along the way. 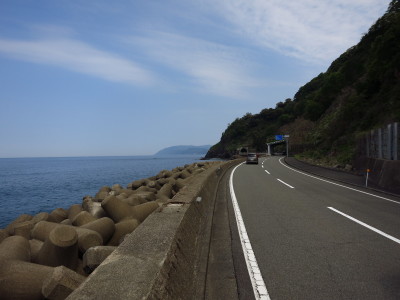 Turns out, none of those things are true about the coastal road going north to Kanazawa. The 305 was a fantastic cycling route: extremely flat, beautiful scenery along the way and loads of restaurants and vending machines. The weather was great too: nice and warm, and with a slight tailwind cycling was good fun. On the fly I decided not to take the mountain road and just kept going along the coast. I had worried that it would take forever if the roads were hilly and the wind was against me, but everything was in my favor and I made excellent distance. Note to self: must take photo of caterpillar crossing the street. There's always so many of them in the morning. 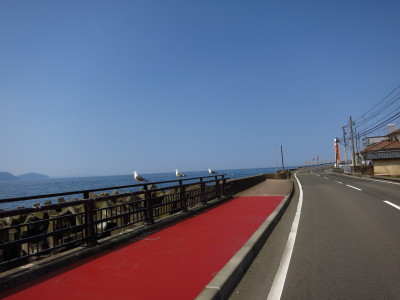 Everything went great until I got to the end of the coastal road and back into populated area. There was a camp site I had marked which was a bit out of the way of the main road. That 'bit' turned out to be a 10 kilometer detour through a fairly hilly road full of annoying tourists and overcrowded tourist attractions. I was even stuck in a traffic jam for a few minutes. Yuck. You can definitely tell that golden week is in full swing. Tourists everywhere. 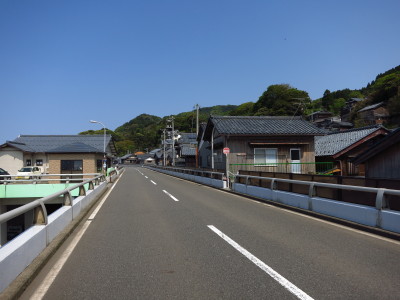 When I got to the camp site it wasn't very busy yet. I soon found out why: it cost 4500 yen. The only was I can describe my reaction to that price is: that is just fucking ridiculous. No motherfucking campsite is worth more motherfucking money than a motherfucking cheapass business hotel. No matter how fancy you think your shitty camp site is, there's just no way it would be as nice to stay at as a hotel, so if you're going to ask for that much money it's pretty clear that you're targeting rich-ass tourists. I literally told the guy: (accidentally in a voice that was probably a bit too loud >_<;)  "Way too expensive! I can't do that. I'll find someplace else". So I did. And I didn't.

I cycled on to the second (and last) camp site I had marked in the area, which was quite close to a massive theme park, which was clearly crazy busy. Unlike the camp site, which did not seem to exist. I didn't mind much at that point. If it had existed it would likely have been expensive and touristy as well.

From there I had two options: cycle to a nearby town to find a hotel, which wasn't quite in the wrong direction, but it wasn't much in the right direction either. Or option two: just cycle on to Kanazawa and see what I'll find on the way. With 95km on the cyclocomp I went for option two. 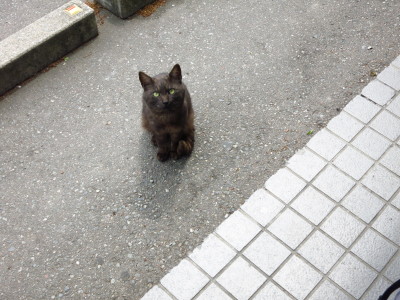 After some inefficient cycling on some local roads I managed to get back on the 305 heading north. I saw a very direct road leading straight to Kanazawa and figured it'd be loaded with conbinis and other useful stuff, so I could make it a long cycle day without any issues. But when I got near the direct road it turned out to be the highway bypass road thingie, which means no cycles allowed. I changed direction and had to cycle another few kilometers to get back onto a road that actually went anywhere. Amazingly, just as I got to the junction, there was a lovely conbini waiting for me. I really needed a proper break.

With my mind still set on cycling all the way to Kanazawa I quickly checked the internet for weather, and snuck a peek at the booking.com app for nearby hotels. I didn't except much from it really, and when the first hit was an onsen hotel 30 kilometers away for 90000 yen per night I was about to close the app immediately, but then I saw the second hit: a cheap-ish business hotel less than 2 kilometers from my current location! Woohoo! I did not expect that. It was in the wrong direction but I figured it was worth a detour.

So now I am in a place called Daishoji and I have no idea what's there to see around here. My legs hurt like hell but I'm still kind of curious to explore the area. In the end I haven't saved myself a day in terms of progress. Kanazawa is still a half-day cycle away, and any further destination would be just a little bit too far. Since I've got time I'd rather take some more interesting roads and zigzag around a bit, rather than rush to the finish.

JMA's weather report keeps changing every time I look at it. Yesterday it said that Tuesday would be dry, now it says that there's a 70% chance of rain on Tuesday. They're kinda crap, really. Only useful for the immediate next day, and even then they can be pretty wrong. I'm not too worried for the next few days, since I'll be in a fairly populated area. There'll be places to hide under if the rain hits.

One last thing: biker gangs are bloody annoying. They ruin nature and every single place they visit.