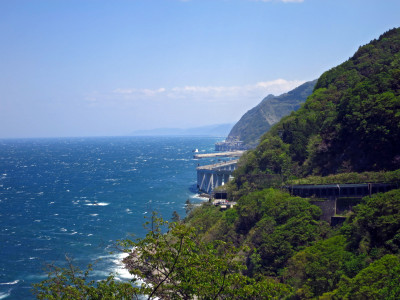 Today marks the last day of my coastal adventures. I had been expecting an average, perhaps slightly easy, day of cycling. It could have been raining, hilly and with the wind against me. But the universe gave me a break today. It was sunny, flat and the wind was powerfully on my side. Today was probably one of the most successful cycling days I've ever done. 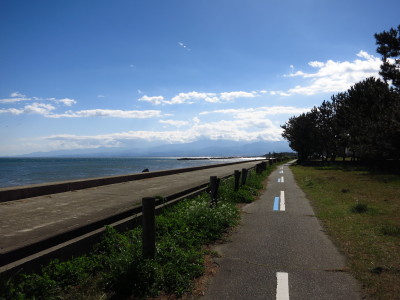 I started off cycling north towards the coast and noticed that there were hardly any cars around. This must have something to do with golden week, as well as some of the roads I've chosen. The roads were not the most direct route to the destination, and those roads are always the best for cycling. They're quiet and lovely. Today I started out on a coastal cycling path and then switched to regional roads going through sleepy Japanese villages and wide-open rice field plains. Later the land became wedged between mountain and ocean and there was a bit of tricky coastal road, but it was all good fun. All thanks to the wind. 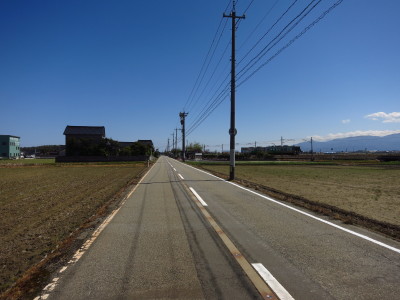 That amazing wind. I encountered a few cyclists going the other way today, and they were suffering like mad. The wind was insanely strong. Without doing anything it would occasionally propel me to speeds of around 35kph, and in one instance it actually blew me up a 3% incline that I had began to slow down from. Even when the wind was less strong I had no problem keeping up a pace of around 30kph, with significantly less effort than it would have taken any other day. It was fantastic.

Of all the traffic participants I seemed to be the most positively affected by the wind. Walkers were annoyed by the wind, motorbikes slowed down a lot to avoid being blown over by sudden gusts. Road cyclists going my direction didn't dare go fast because their bikes are so unstable, and one gust could blow them off the road. I, on the other hand, was cycling on a supremely stable sailboat with loads of surface area for the wind to blow on, and loads of very well-balanced weight to keep the bike stable. I had a blast. The best part was thinking to myself "I don't have to go back the same way today". I just couldn't keep the smile off my face. 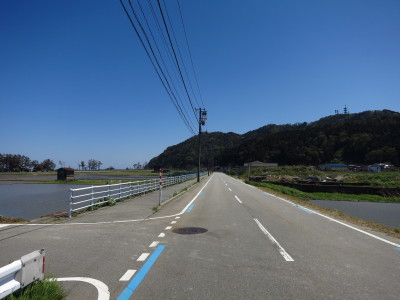 It was tricky at times, especially when the road turned a bit and put me in a crosswind. If you're not going exactly the right direction then the wind can be very quick to suddenly give you a nudge towards a gutter or into a car. But those bits did not come often and most of the time the wind was near-enough in my cycling direction. The best part was getting up to about 30kph, which must have been around wind-speed, because the sound of the wind disappears and everything just gets perfectly quiet. You can hear the wind shearing past signs and houses, and you can see it making waves in the water that lay on the rice fields, but at the right speed it did not affect my bike at all. There was just serene silence. And music. Excellent music.

When the plains ended the road became a bit more hilly, and a lot more tunnely. As I was about to head into quite a long tunnel I noticed a side road going around, so I took that instead. It led me onto an amazing walking path that ended up at a famous site which is better described here. It used to be one of only two ways to the west of Japan. It was an unexpected monument and it really me appreciate more the roads that I am traveling on. It also did a great job of making me feel like a traveler. 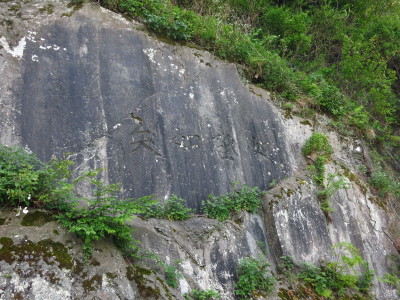 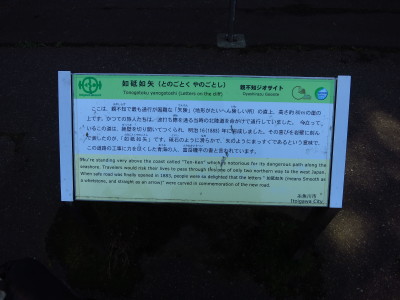 Thanks to the amazing wind I did 80kph in 4 hours and ended up in Itoigawa quite early. According to the cyclocomp I've climbed 600 meters during those 80 kilometers, but I hardly have any recollection of it. The wind just made it so easy. I really almost felt like the day ended too quickly. But it was too late to do another 60 kilometers in the mountains and find accommodation.

I had planned to camp in Itoigawa because I couldn't find any hotels online, but since I was in the center of town I had a look around. The very first hotel I went to was cheap and had room, so I reserved it. I cycled to the campsite anyway, but it was quite a climb. 10-15% inclines.. When I finally reached the top it turned out to be a posh holiday park thing with tennis courts and baseball courts, so I decided I was happy with my hotel room instead.

The end of the trip is nigh! It's still a good week to get back, but I'm starting to feel the mood shifting towards an end. I'm a bit sad about it ending, but I remember when, at the end of the second trip, I tried to extend it by doing another stretch, which ended up just not feeling right after a while. A proper end must be had.

I am 50 kilometers away from Joetsu, which is where I took the ferry to Sado island on my second big trip. I'll be in Matsumoto soon, where I've been once before, with good friends and great memories. After that it's not long to the Fuji five lakes area, which is where I started my very first solo cycling trip, now over six years ago. I've been to the five lakes area many times, with many people, and it's an area that's hard to forget. I'll be spending some time there before taking the same road back to Atsugi that I started on all those years ago. I've come full circle. Kind of. Minus a few bits of coast. But it's the thought that counts :) 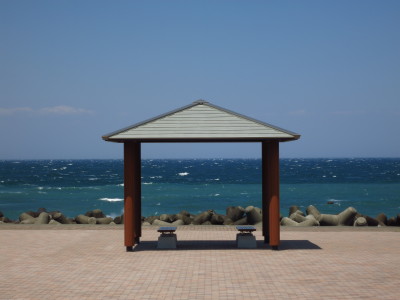