It did not stop snowing, and my cold did not disappear. Thursday I thought it was ok to head in to the office, but I was sorely mistaken. Friday I stayed at home and felt quite sick still. Thankfully I recovered a lot over the weekend, something which can't be said about the weather. It just keeps snowing and snowing and snowing. 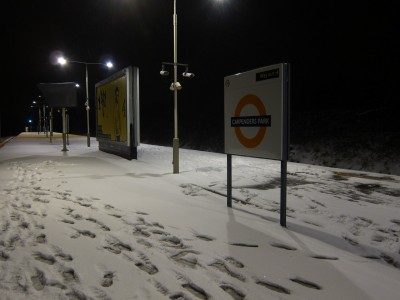 The cat does not care. 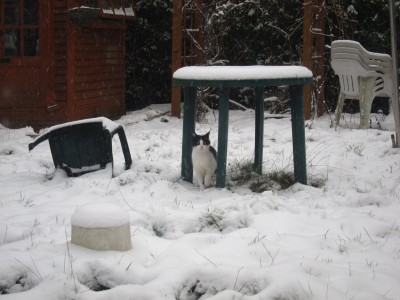 The weekend wouldn't be a proper Bri'ish weekend without the customary Sainsbury shopping experience. It was surprisingly not so busy this week, probably because of all the snow. 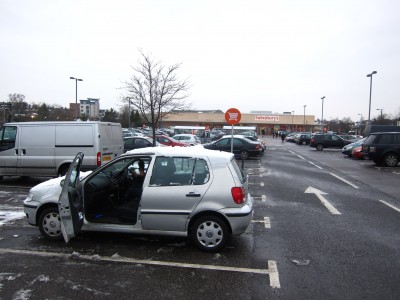 Going home on Sunday I was hoping to find an empty train and a quiet walk home, but the train was full of people and there were annoying loud chav people everywhere on the walk home. It's no surprise that South Oxhey can be found on the ChavTowns website. I highly recommend reading all 300 comments on that article, they're quite hilarious, yet sad at the same time. 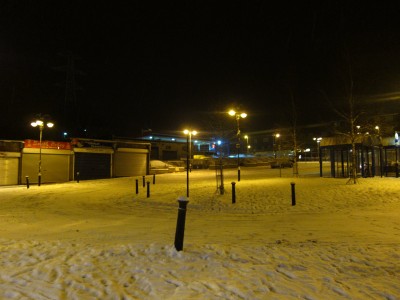 This is what my front door looked like after 2 days away. 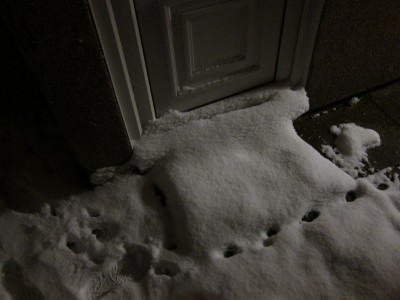 All in all, a quite successful and memorable weekend. 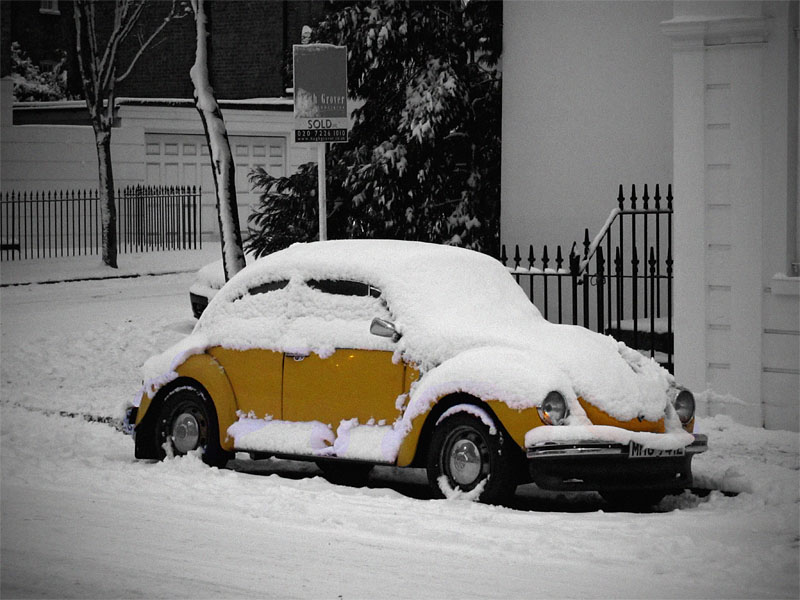 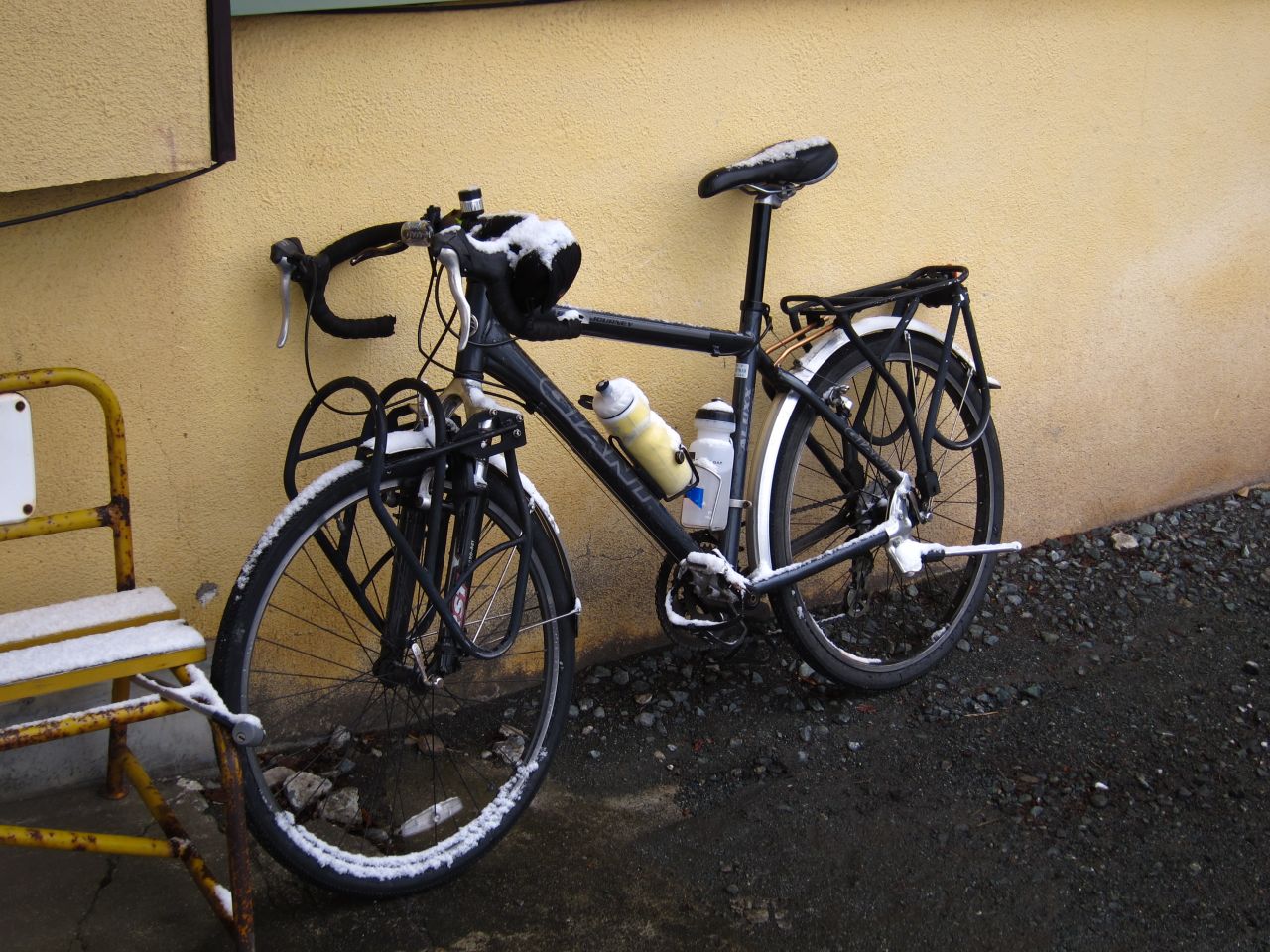 This is how my bicycle looked like in the morning.

I never expected this to happen. I woke up at 7, seeing a lot of light through the window of my icy cold room. I thought it was sunshine, but no. Everything is covered with snow, and when I left one hour later it was still snowing. I don't really have any clothes fit for this kind of weather. I asked at the local conbini if they sold scarves, but the conbini lady told me that they don't have them in this season. She said "this snow if kind of special". (kono yuki ha tokubetsu). Indeed. I didn't want my face to freeze off so I used a towel instead, and sunglasses against the snowflakes which kept hitting my eyes. 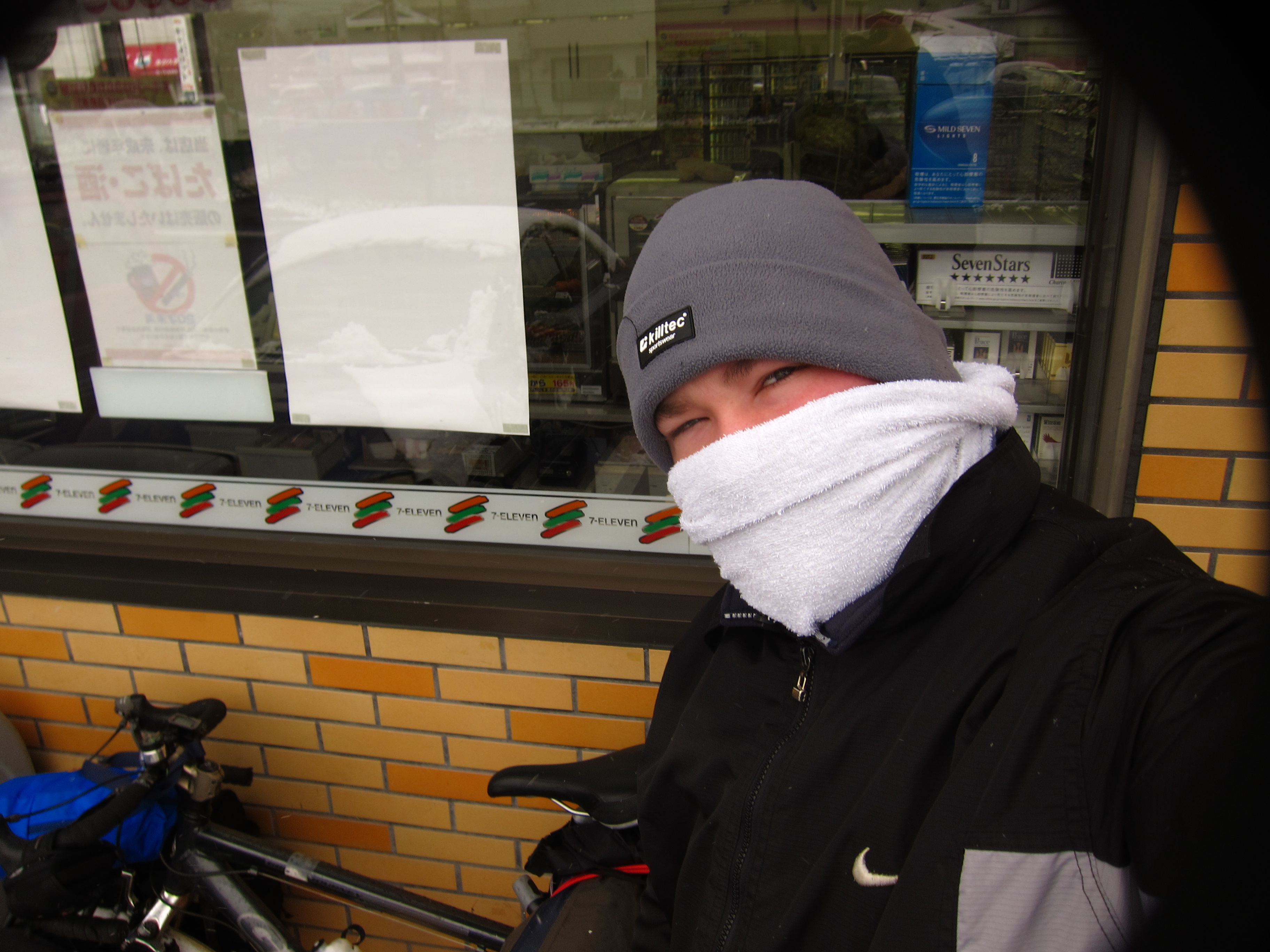 Strangely enough this day has been the most fun on this trip so far. The roads are mostly flat, slightly uphill or slightly downhill, and cycling is easy. Besides that, the snow made the landscape very beautiful. It's colder here, so the sakura are still blossoming, and today I witnessed sakura trees covered in snow. Beautiful. 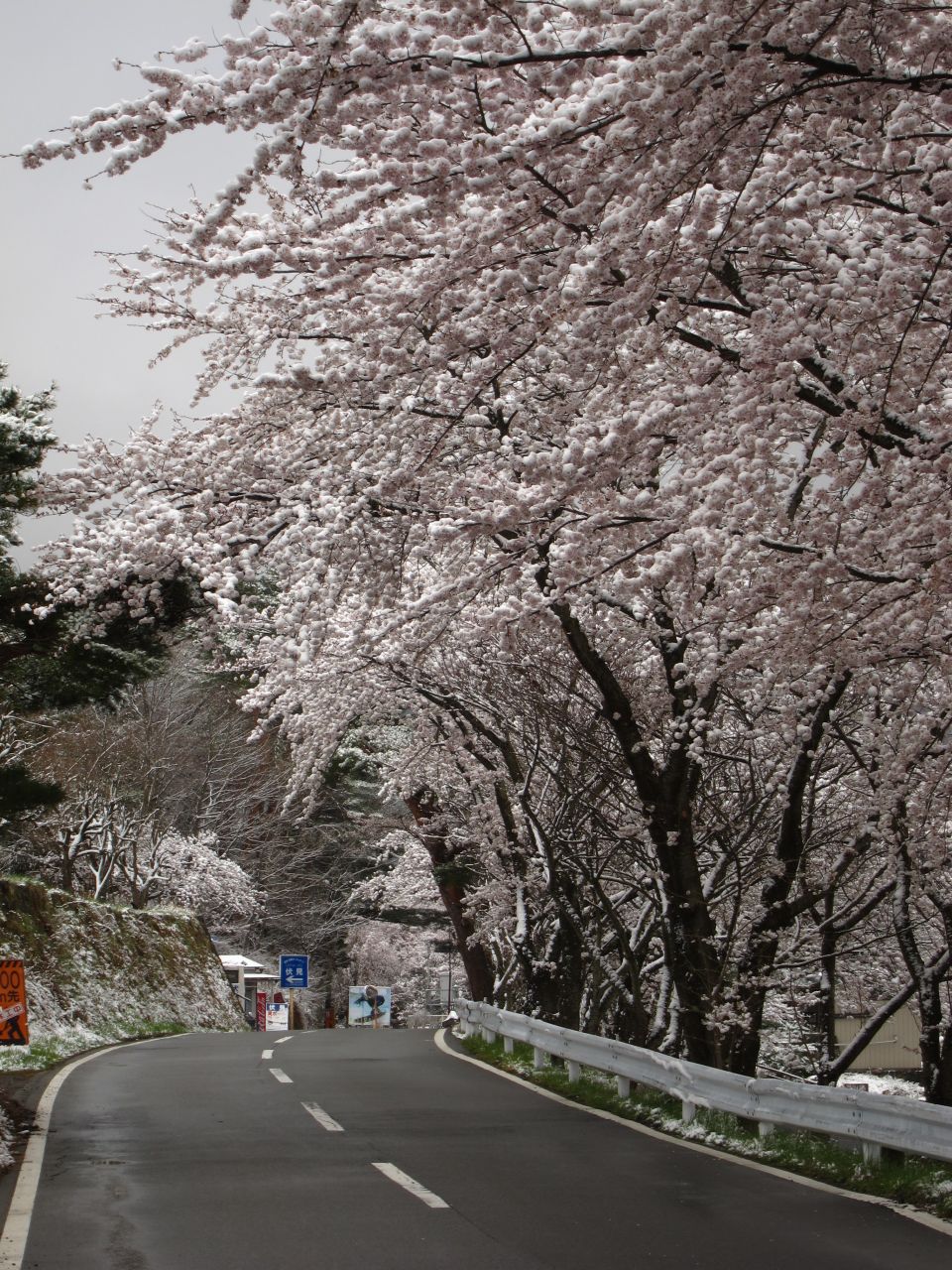 I'm at a roadside resting place right now, just finished eating curry udon, which was the best meal I've had in months. I'm getting used to my daily routine of getting up early and preparing the bicycle, then cycling all morning, finding a resting place for lunch, and then deciding where to stay for the night. I just booked a hostel that's even cheaper than the one I stayed at yesterday. I wonder how that will turn out. From here on I'll travel downhill all the way until the coastline. More later!

It rained again today, and temperatures are close to the freezing point. I'm fairly sure I detected some raindrops today that were not falling to the ground straight, but were rather swirling like snowflakes. Imagine that, snow in Atsugi at the end of March. I've never seen that before. Obviously it only happens at a time that's inconvenient to me.

I'm still semi-rushing to get rid of my furniture: after failing to sell my fridge the disposal company picked it up today and charged me 6900 yen. Strangely enough I didn't feel bad about paying this, as I had expected. At least I know that I'm not contributing to the huge amount of waste at the Japanese roadsides.

Final preparations are almost complete. After long consideration I finally got travel insurance. Everybody I know is telling me to get it, but I am not a fan of insurance at all. It seems like a waste of money to me, and it degrades the adventure-ness of the trip. If you have insurance it's like gambling with fake money, there's no point. In my opinion the insurance business is the greatest rip-off of modern society, and yet I contributed today my getting a 2-month travel insurance for 20.000 yen. Now I can get sick, lose my stuff, drop my camera or die a horrible death from the plague and nothing bad will happen. Because I am insured.

The insurance lady put my life in perspective though: from an insurance point of view, I'm just another gaijin doing a trip around Japan after having worked here for a couple of years. It's not uncommon, I guess, and insurance companies seem to be quite used to this kind of situation. What is going to be the biggest undertaking of my life (well, except for the actual decision of going to Japan to work) is just another day at work for someone else.

Tomorrow I'm planning to go shopping for a better tent. I've got a nice list of locations to visit, so that should keep me occupied for most of the day. I'm also hoping to get a phone call from the bicycle shop telling me that the sprocket I've been waiting for arrived, but I wonder if they can really make it in time.

On Wednesday the furniture disposal company will pay me a visit. After that, all that remains is a little bit of cleaning and then I can say goodbye to my room whenever I want. Well, after sending my stuff home, that is. There's always just 'one more thing' that needs to be done before I'm ready to go. Like I said before, I'll be glad when I'm finally on my bicycle, leaving all my worries behind.

(I blogged from a cafe today. My room is too dark, cold and depressing to stay in during the daytime. In the evenings it somehow becomes cozy again though. I haven't figured out yet why my brain tells me my room sucks in the morning/afternoon even though it likes the room during the evening and night. )

It was fun. Especially the second day. The first day I was clowning around and I forgot all about how to ski. It was only the second day that I remember how to turn properly T_T, but then it was already too late. I'd gone with Brian to the top of the mountain, and the only way down was an intermediate course. I ate snow... Worse of all I didn't hang out much with most of the people that day.

Second day way great though. I took my camera and lenses with me in my backpack and went around taking pictures, and at the same time taking more and more risks on my ski's without falling :D Eventually I switched to taking movies with my compact camera though, because taking the big camera out all the time was quite annoying. Taking movies and pictures of everyone having fun was so great, and the backdrop is just the best.

I've shared some of the pictures on picasa here, and there will be more (eventually, I'm getting a backlog.... ) on my photoblog later.

(Side note: wordpress seems to have 3gb of free space instead of the usual 50mb. Looks like they finally realized it's not the 1990's anymore)